Poor screenwriting reveals that this movie is all style, no substance 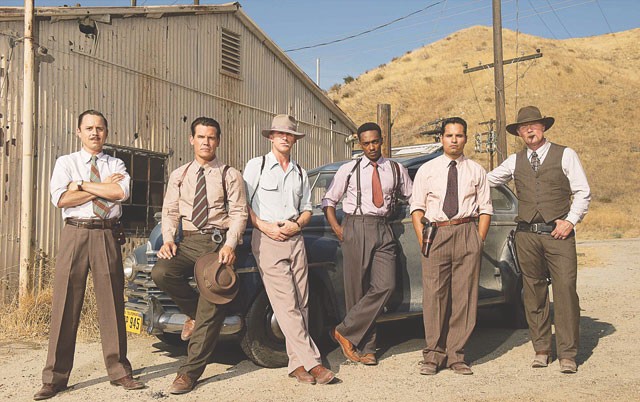 Though it tries mightily, The Untouchables it's not. First of all, screenwriter Will Beall is no David Mamet. And as stylish as director Ruben Fleischer (Zombieland) can be, he just doesn't have the cinematic chops to match Brian De Palma. Finally, while Sean Penn's cartoonish scenery-chewing is good for a chuckle or two, it never comes close to the operatic menace that Robert De Niro brought to Al Capone.

Normally, I might say that it's not fair to hold these two films up against one another. But Fleischer and his team invite the comparisons. Not only is De Niro's menacing "I want him dead. I want his family dead …" rant re-created by Penn as a frothing shriek of "I want them all dead! … I want their pets dead!" but Gangster Squad's finale tries to emulate De Palma's train-station shoot-'em-up (which was borrowed from Sergei Eisenstein's Battleship Potemkin, no less) with a slow-mo Tommy-gun battle on a grand hotel staircase that looks like an early-'90s music video. Though adequately entertaining because of its cast, relentless action and setting, Gangster Squad can't help but play like a third-generation knockoff.

World War II ex-Special Forces soldier turned cop John O'Mara (Josh Brolin) is a battering ram of a man, tasked by LA's last honest police chief (Nick Nolte) to put together a secret crew of LAPD outsiders and take down the ruthless gangster Mickey Cohen (Penn) – no easy job when greed and corruption are the rule of the day. In a twist that goes nowhere, O'Mara's pregnant wife, Connie, chooses John's team of incorruptible outsiders – and wouldn't you know it, they're a Benetton ad of multiculturalism. There's the grizzled cowboy sharpshooter (Robert Patrick), his trusty Hispanic sidekick (Michael Peña), a geeky communications genius (Giovanni Ribisi), a by-the-book black beat cop (Anthony Mackie) and the oh-so-cool-and-cocky Ryan Gosling. None are fully fledged characters, but all look terrific in their period outfits. In case you couldn't guess, what little personal drama there is involves Gosling falling for Cohen's dame (Emma Stone).

What might have been Gangster Squad's most interesting conceit – a WWII vet leading a team of cops to wage military-style warfare against a mobster – ends up being the reason the movie comes across as so incredibly dumb. Not only is O'Mara laughably bad at leading his men into battle, screenwriter Beall often forgets to exploit his own concept. For instance, in a decently staged car chase, it's Cohen's goons that think to use grenades on the cops, not the other way around. In another scene the thugs pull out a military-style machine gun. Meanwhile, Gosling's character implores O'Mara to get smart about how they fight. It's advice that goes nowhere; for all the cops' talk of the war, the only lesson the Sarge seems to have learned is "charge that hill!"

Sleek and stylish, it's clear that Gangster Squad wants to be a brutish, pulpy pastiche. There are plenty of neon lights, fedoras and dames in red dresses. Art Deco is all the rage, gun casings ping off marble floors during firefights, and the soundtrack boasts a playlist of well-chosen period tunes (the most original touch in the film). But the movie is too glossy to be film noir and too formulaic and shallow to be as hardboiled as, say, L.A. Confidential. Instead, Gangster Squad comes off as the most violent episode of Dragnet ever made – with its jingoistic, might-makes-right flag-waving intact.

Originally slated to be released last summer, Gangster Squad was held until January due to the shooting at the Aurora movie theater in Colorado, which also inspired a reshoot of its biggest action scene – a gunfight in a movie theater that now occurs in Chinatown. I applaud the filmmakers' sensitivity to the subject of real-world violence, but can't help but think it's oddly placed in a film that opens with a man being pulled apart by a pair of automobiles.