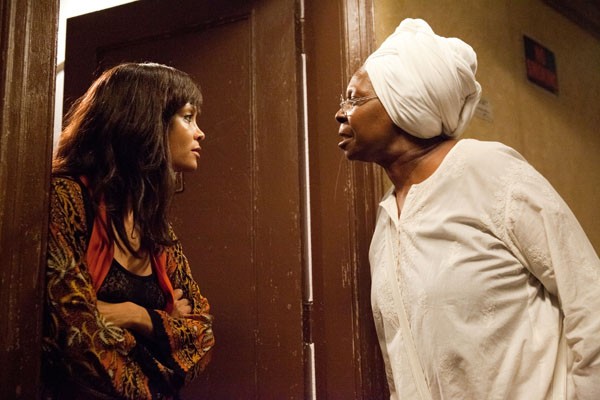 To say For Colored Girls is Tyler Perry’s best film to date is like boasting that this summer’s Eclipse was the best Twilight entry yet: That was still a labored supernatural soap opera and this is still an overwrought look at the plights of the  modern black woman.

Originally performed as a series of poems from seven characters identified only by the color of their costumes, Perry takes Ntozake Shange’s acclaimed play, adds two more to the ensemble, gives everyone a name and connection to one another and fills in the gaps between the soliloquies to give the proceedings a more conventional narrative flow.

We have Joanna (Janet Jackson), a NYC fashion magazine magnate – Anna Wintour with Rihanna’s hairdo. She psychologically abuses her assistant, Crystal (Kimberly Elise), who is physically abused by her war-scarred husband (Michael Ealy). Living next door to Crystal is apartment manager Gilda (Phylicia Rashad), who tries to help but rarely can. Next door to Gilda is Tangie (Thandie Newton), a floozy bartender who can’t stand her younger sister, Nyla (Tessa Thompson), or their religion-minded mother, Alice (Whoopi Goldberg).

Oh, and maybe there’s some hope in there somewhere as well.

It’s almost as if Perry tries to top the perils faced by Precious in last year’s film of the same name (executive produced by Perry). Anyone who’s familiar with the man’s homegrown, gospel-laced brand of melodrama knows that he’s never met a trial, tribulation or kitchen sink he didn’t like to toss in a woman’s way, as if running down a checklist of burdens for his characters to bear before giving said characters a second thought.

What’s refreshing about Girls, though, is that these many dilemmas are faced by fully fleshed-out characters for a change instead of miserable stereotypes, with most of the credit going to the uniformly strong ensemble at his disposal. Jackson initially appears to be lifting Meryl Streep’s The Devil Wears Prada performance wholesale before sticking a speech about all the apologies she gets from her husband but doesn’t need anymore.

Rashad is quietly compassionate toward her neighbors; Goldberg is ashamed of her daughters yet desperate for their attention; Newton plays proud and loose as never before, while Elise, Rose and relative newcomer Thompson all suffer in individual, heartbreaking ways.

The best thing Perry can do is weave the poems in with the dialogue and stay out of everyone else’s way, allowing the actresses’ quiet pain to balance out his penchant for exaggerated emotion. For Colored Girls may not be outstanding as a whole, but coming from the man who made a mint as Madea, there may be some hope for his career as a more graceful storyteller.