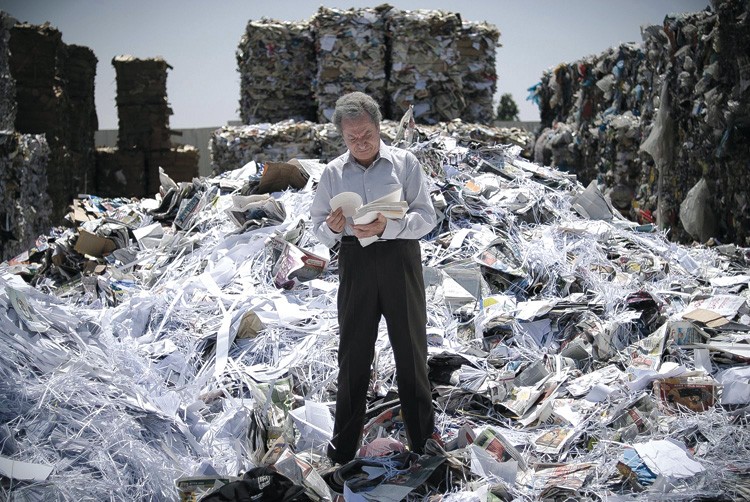 I'm often baffled and simultaneously fascinated by the personal politics of any profession, interest, desire, hobby, volunteer work - basically, anything humans engage in. Whatever the task, eventually a game of positioning will inevitably arise, along with all the pettiness, bitterness and unintentional hilarity such bickering entails. (You haven't truly lived until you've seen grown adults bicker and talk behind backs over free movie screenings or local Mommy and Me meetups.)

Footnote, the Academy Award-nominated charmer from writer-director Joseph Cedar, fearlessly digs into this phenomenon - albeit from the obscure but substantial world of Talmudic studies - and uncovers truths that are both deeply human and cosmically minute.

Shlomo Bar-Aba is astounding as Eliezer Shkolnik, a stoic Jewish scholar who keeps his grandiose self-assurance mostly under wraps, though not nearly enough to keep him from being largely shunned by his academic peers. He sees his work as that of a literary archaeologist, whereas other fields of Talmudic study (including his own acclaimed son's) are mere populist garbage. His overinflated sense of worth derives from his mention in the footnotes of a book by a legendary mind.

One day, Shkolnik learns that he is to be awarded the Israeli Prize, a long sought-after recognition that would signal a life's work well done. There's a problem, however: There was a clerical error; the award was meant for his son.

Cedar paints Uriel Shkolnik with a satirical brush, but Lior Ashkenazi, who plays him, fleshes him out nicely, infusing the role with gentleness, nobility and a kind of slouched pomposity. When a board of elders informs him that he's won the award - and that his father now mistakenly believes he's been validated - the younger Shkolnik's first instinct is to wonder aloud why the committee hasn't honored the elder. Even better, he has seemingly well-founded, deeply political suspicions and scandalously verbalizes them.

But there's still the matter of his father's soon-to-be wounded pride, a delicate, seemingly intractable issue that, Shkolnik determines, requires a doubling-down on principle. But he's failed to take into account the vast capacity humans have for self-protection and/or self-delusion, and it costs him dearly, leading to a mano-a-mano clash of familial titans as painfully sad as it is morbidly chuckle-worthy.

Cedar's uniquely qualified to delve into this tangled mess: He's a graduate of both NYU's film school and the Hebrew University in Jerusalem. But it's his humanity, not his bona fides, that permeates this stellar outing; like Shkolnik the Elder, Cedar's social taxonomy is highly developed, revealing deep reality within unreal circumstances. Like Shkolnik the Younger, he assembles his data with an eye toward mass consumption, while never seeming to beg for it. Not that his characters are above begging for approval. That's only human.