Even in an era increasingly defined by on-demand viewing, television still puts its best foot forward in fall

By now, the idea of "fall television" seems a little outdated. While we used to look forward to the slate of new shows and new seasons of old favorites as the dog days of summer drew to a close, the New Streaming Order has changed things.

Instead of having to make it a point to sit down in front of the boob tube at a specific time, we get to watch whatever we want whenever we want. And to a certain extent, this has also disrupted the traditional schedule of fall premieres, mid-season replacements, May sweeps and summer schlock. Just look at Netflix's penchant for dropping new original shows on its service about once a month, often with little fanfare. But old habits die hard, and even the new Big Four (Netflix, Hulu, Amazon and HBO Now) seem to have put out some of their strongest stuff during what used to be the networks' time to shine. So here are a few things you should be adding to your watchlist this fall.

When HBO's plans for an updated version of the 1973 sci-fi classic about robotic theme park attractions run amok was first announced, many keyboard warriors cried foul. And in a certain way, they were right. The original Westworld holds a rightful place in the sci-fi canon. Plus, it's the other other movie people remember Yul Brynner from. But HBO's new series is way beyond a simple remake. The inciting concept is the same, sure: There's a theme park that looks and feels exactly like the Old West, populated by androids who are indistinguishable from human beings until something goes wrong. But Jonathan Nolan's update goes far deeper into the moral and societal implications of the premise than Michael Crichton did in the original. The cast is superb, with particularly strong performances from Evan Rachel Wood and Ed Harris, who play a "host" and a "guest" locked in a repeating cycle of violence and death. (New episodes added to HBO Now Sundays at 9 p.m.) 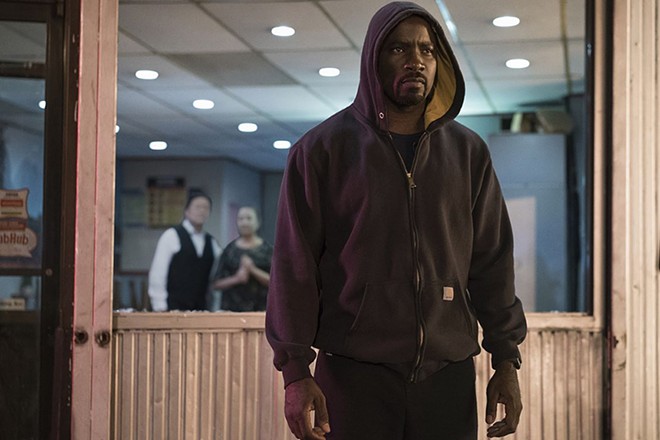 Netflix and Marvel's partnership has resulted in two excellent seasons of Daredevil and Jessica Jones, but the second season of Daredevil suffered from the lack of a villain as strong as Vincent D'Onofrio's Kingpin. So it's nice to see that Luke Cage has plenty of worthy opposition in his first season. Mike Colter reprises his role from Jessica Jones as the titular hero, gifted with super strength and unbreakable skin in a prison experiment gone wrong. But Mahershala Ali and Alfre Woodard steal the show as Cornell "Cottonmouth" Stokes and Mariah Dillard, two powerful cousins (he's a disreputable businessman, she's a city council member) who do all the wrong things for all the right reasons. The show is backed by what is easily the best television soundtrack in recent memory, running the gamut of funk, soul R&B and hip-hop, and curated in part by Ali Shaheed Muhammad of A Tribe Called Quest. We challenge you to find a more fun moment this season than watching Luke Cage bring the ruckus against a whole mess of bad guys while Wu-Tang Clan's "Bring Da Ruckus" plays. (All 13 episodes available to stream on Netflix)

Hulu's bullpen when it comes to original content doesn't run quite as deep as the other streaming services, but it does seem to have a talent for getting big names onto quality projects. See this year's earlier James Franco/Stephen King/J.J. Abrams collaboration 11.22.63, for evidence. Their next big series brings House's Hugh Laurie back to television in the role of a psychiatrist who gets too close to one of his patients (Gretchen Mol), drawing the ire of her abusive husband (Paul Adelstein). While the occupation of the main character may give the impression that it's going to be "House, but for brains," the show exudes a much darker, more sinister tone than the show that made Laurie a household name. Lenny Abrahamson, director of the Oscar-nominated Room (and the criminally overlooked Frank), is set to direct at least one episode. (Premieres on Hulu Oct. 19)

Easily the strongest pilot from Amazon this season was Tig Notaro's One Mississippi. The show steals a page from Louie, in that Notaro essentially plays herself in a fictionalized version of real events. Recovering from a double mastectomy, Notaro returns to her hometown to take her mother off of life support and deals with the heartbreaking fallout with her dry, deadpan wit. The series proper delivers on the promise of the pilot, effortlessly merging wacky fish-out-of-water humor with touching human moments as Notaro's fictionalized family deals with her mother's death. (All six episodes available to stream with Amazon Prime)

This is a bit of a stretch for our streaming-based focus, but FX's Atlanta is too good not to throw some love to. Donald Glover either confirms your suspicions that he's a creative force to be reckoned with or surpasses your expectations if you weren't all that impressed with his post-Community output. Created by and starring Glover, the show follows Earn Marks, an Ivy League dropout stuck in a dead-end job and struggling to pay rent, as he takes care of his baby daughter and rekindles a relationship with his ex. When his cousin, Paper Boi, suddenly hits it big in the rap game, Earn tries to come on board as his manager, but quickly gets in over his head. The show is ostensibly a comedy, but it hits on plenty of serious topics while simultaneously incorporating a strange sense of absurdity in how events play out. If you have a cable subscription (or, like, a good friend with a cable subscription), you can stream Atlanta on FXNow, the streaming app and website for the FX family of channels. Or you can just buy the episodes for $2.99 a pop as they come out on Amazon. (Airs at 10 p.m. on Tuesdays on FX)