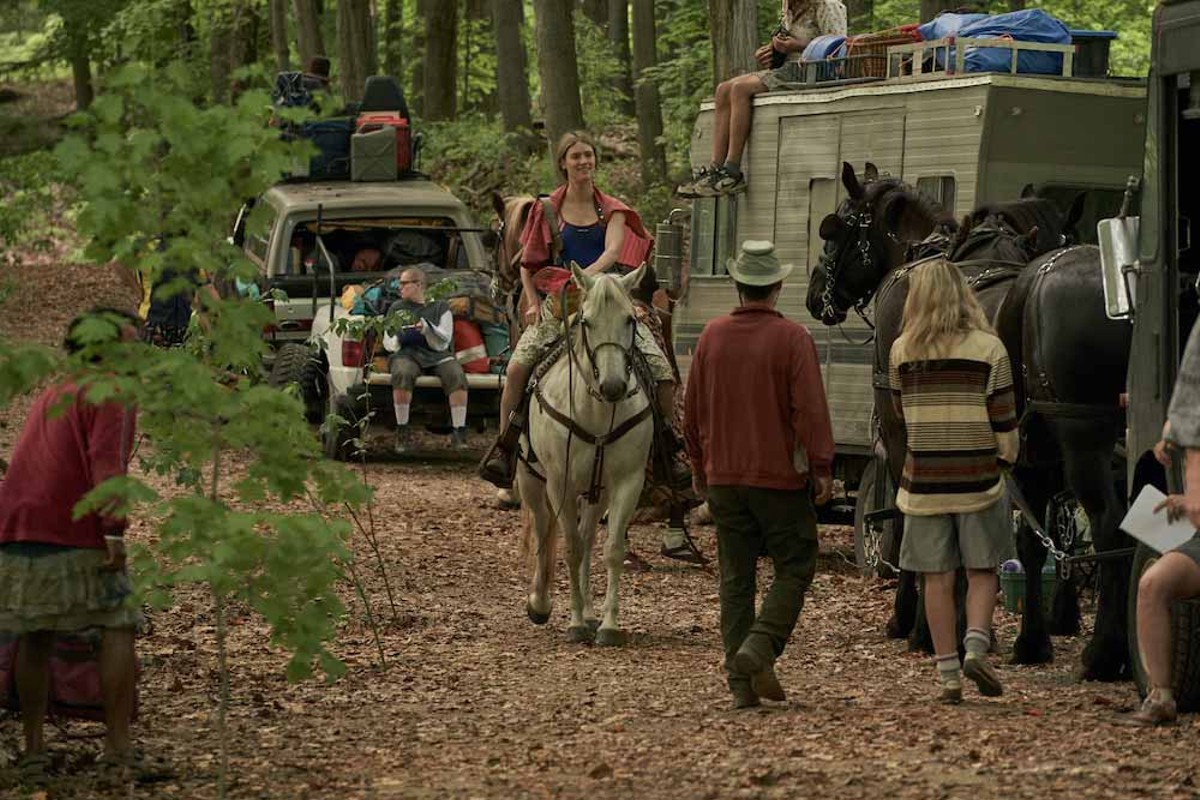 The Hand of God — Writer-director Paolo Sorrentino won the Golden Lion at the Venice International Film Festival for his autobiographical memoir of having his life saved by soccer legend Diego Maradona. Hey, if that's all it takes, did I ever tell you about the time I went to prison with Lenny Dykstra? (Netflix)

Rumble — The ubiquitous Will Arnett supplies the voice of a reptilian monster who tries to become a champion wrestler. Now what that reminds me of is the time I got a tattoo with Roddy Piper. (Paramount+)

Selling Tampa — It's a deal, as long as you take crypto. Oh, that's not what we're talking about? It's another real estate show? Fine. Then I'll give you Altamonte Springs, Ocoee and the east wing of Fashion Square, and we'll call it an even trade. (Netflix)

The Cut (aka O Grande Look) — Twelve master hairstylists vie to be recognized as the best in all Brazil. See, this is where you want a panel of drag queens. "Girl, that mullet should be on trial for crimes against humanity!" (HBO Max)

Days of Our Lives: A Very Salem Christmas — In this spinoff from the deathless soap, Will Horton (Chandler Massey) writes a screenplay that puts his loved ones into some classic holiday-movie situations. Does this mean we get to watch Deidre Hall fall 30 stories off Nakatomi Tower? (Peacock)

Dead Asleep — Here's one that hits close to home: New interviews and reporting illuminate the case of Randy Herman Jr., who in 2017 tried to claim sleepwalking as a defense in the stabbing death of his West Palm roommate. As if you weren't already concerned your friends find you boring, now you have to worry that making them nod off could have fatal consequences. (Hulu)

Diego, The Last Goodbye (Diego, el último adiós) — In what has to be a complete coincidence with yesterday's release of The Hand of God on Netflix, this new documentary explores the final year in the life of Diego Maradona. Speaking of which, did I ever tell you about the time I did 'shrooms with Michael Phelps at Leon Spinks' funeral? (HBO Max)

Finding Magic Mike — Ten hunks pull themselves out of a personal funk by competing in a stripping contest that, if we aren't careful, might not be the last word in reality competitions. But if we're really lucky, we might be in for a mash-up with Nailed It! that spotlights guys with Peyronie's. (HBO Max)

The Fungies, Season 3 — Sentient mushroom Seth has just 20 more episodes, and then his animated inquiries into the wonders of science are going to be a thing of the past. But I'll tell you, if he knew the axe was going to fall, he sure wasn't letting on at Leon Spinks' funeral. (HBO Max)

MacGruber — The one SNL franchise that needs to be revisited even less than A Night at the Roxbury inexplicably gets a new 10-episode series, with the title character sprung from prison and conscripted into an all-important "suicide mission." And now you're thinking about all the times you've gotten your heart broken by taking someone at their word. (Peacock)

A Naija Christmas — The expectations of Nigerian mothers are the driving force of a holiday comedy in which three sons try to make their mama happy by bringing home wives for Christmas. Sounds pretty easy, until you realize they can't already be somebody else's wife. (Netflix)

Puff: Wonders of the Reef — A baby pufferfish is our guide on a documentary tour through the wonders of the Great Barrier Reef. Narration is by Rose Byrne, but in a perfect world, the pufferfish would be voiced by Joe Rogan. Because he can blow himself, geddit? (Netflix)

The Real Housewives of Miami Season 4 — Canceled in 2013, the series is back with three returning cast members and three newbies, including its first-ever LGBTQIA+ housewife. Yeah, bring that home to your Nigerian mom if you want to see a show. (Peacock)

South Park: Post-COVID: The Return of COVID — The second of those 14 new South Park films follows the grown-up versions of Stan and the gang back in time, on a mission to prevent the coronavirus from ever transpiring. A noble goal and all, but if they really wanted to do humanity a favor, they'd be making sure Lana Del Rey's parents were never in the same time zone. (Paramount+)

Station Eleven — Its cast and crew were hard at work on this 10-episode sci-fi series about a global pandemic when the real thing hit. I bet they all ran right out and bought lottery tickets! Well, the live ones, that is. (HBO Max)

Premieres Friday, Dec. 17: A Forbidden Orange — Film buffs thirsty for a bit of the old ultra-documentary will be fascinated to learn how A Clockwork Orange finally got screened in Spain, against the wishes of Generalissimo Franco. Wild guess here: a wholly insincere promise to never make Eyes Wide Shut? (HBO Max)

Joe Bob Ruins Christmas — As is his custom, trash cinema's answer to J.D. Vance is keeping the contents of his yuletide film festival a surprise. Just like a real Christmas present! And if you don't like it, you'll feel guilty for the rest of your life. Just like a Hanukkah present! (Shudder)

Mother/Android — Chloë Grace Moretz plays a young mom-to-be whose impending delivery is complicated by a nationwide war with hostile A.I. What are the odds that title contains a massive spoiler? Maybe they should have gone with Rash Against the Machine. (Hulu)

Swan Song — Two-time Oscar winner Mahershala Ali takes on the role of a terminally ill husband and father who wrestles with the prospect of cloning himself so his family doesn't have to be lonely. Listen, just leave them your Decentraland login and they'll be fine. (Apple TV+)

The Witcher — Star Henry Cavill promises plenty of "man-flesh" in Season 2 of the monster-hunting hit — just no more of those infamous bathtub scenes. Which still gives him about four more seasons to go if he wants to beat Ashton Kutcher's record for not washing. (Netflix)

Premieres Sunday, Dec. 19: 1883 — The first of two planned spinoffs from Yellowstone takes us back to the 19th century to learn how the Dutton family arrived in Montana — back when their clan was headed by Tim McGraw and Faith Hill. If you thought making an album together was hard on a relationship, try doing it while you're fulfilling manifest destiny. (Paramount+)

Premieres Tuesday, Dec. 21: Grumpy Christmas — The sequel to the 2016 Mexican comedy Un padre no tan padre finds crotchety Don Servando trying to reinforce his control over his family, consequences be damned. Or I could have told you none of that, just to see how long it would take you to figure out Grumpy Cat wasn't going to show up. (Netflix)

Jim Gaffigan: Comedy Monster — Round out your jam-packed viewing week with Gaffigan's ninth stand-up special, which he'll use to reflect on the Costco dumpster fire of a year we're about to shake off. Probably not the time and place to mention this, but did you ever think part of the problem might be that you just watch too much Netflix? (Netflix)