Plus: The return of ‘Yo! MTV Raps’ 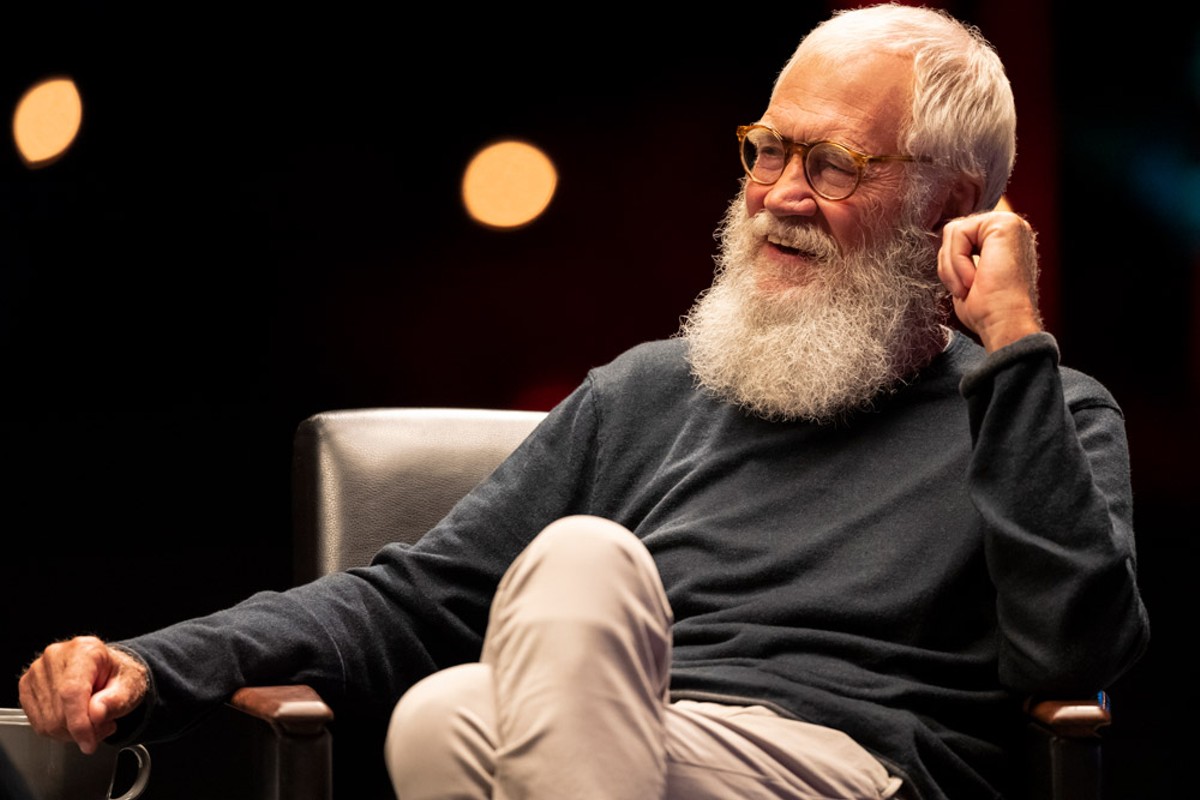 "My Next Guest Needs No Introduction, With David Letterman" photo courtesy Netflix

Premieres Wednesday:
Cyber Hell: Exposing an Internet Horror — Documentary filmmaker Choi Jin-seong uncovers the evil of a South Korean chat-room ring that lured women into sharing compromising materials and then sold those materials to subscribers for cryptocurrency. To make up for its recent losses, Netflix will be offering the doc as a standard stream or a series of collectible NFTs. (Netflix)

The Knights of Castelcorvo — Magic and danger lurk around every corner of a small village, with four kids called upon to guard the place, in this Italian-made fantasy series for the younger set. Don't think of it as an exercise in bad dubbing; think of it as a new generation's gateway drug to Dario Argento. (Disney+)

Love on the Spectrum U.S. — The Australian reality series about the dating adventures of autistics has been widely embraced for its empathy and warmth, which is reason enough to dread whatever changes may have been made for this first-ever stateside edition. A swimsuit competition? A bright light that flashes every 10 minutes, with whoever keeps their cool getting to go on a romantic dinner? (Ed. note: That's epilepsy, and I'm forwarding the letters directly to you.) (Netflix)

Lovestruck High — I swear I am not making this up: Here's a dating competition starring a bunch of Brits between the ages of 21 and 30 who are sent to find love in the halls of an American high school. Oh, and Lindsay Lohan is the host. Holy crap, for once I actually want to hear what QAnon thinks about something. (Amazon Prime)

Who Killed Sara? — The third and final season of the Mexican mystery series promises to finally reveal why the title character was murdered. Listen, things like this take time if you want your audience to come away fully satisfied. Or so Joel Greenberg is clearly hoping. (Netflix)

Premieres Thursday:
Angelyne — Emmy Rossum plays the platinum-blond mystery woman who became a Los Angeles icon thanks to her inescapable promotional billboards. She ended up mounting two runs for governor — which gives me a really horrible thought about Dan Newlin. (Peacock)

The Boss Baby: Back in the Crib — This sequel series to last year's theatrical feature The Boss Baby: Back in Business finds the titular tot fighting an embezzlement charge. What a world we live in now: The babies are accused of financial crimes while the adults are the ones pooping on beds. (Netflix)

The Deep End — A four-part docuseries examines the extremes people will go to when a self-styled spiritual guru promises them relief from pain. Hell, in Florida, we'd sell our firstborn to Jim Jones if he could just do something about the pollen count. (Freeform)

Dragons Rescue Riders: Heroes of the Sky — The show's third season on Peacock debuts just two weeks after another How to Train Your Dragon spinoff, The Nine Realms, started its sophomore run on the same service. I haven't seen a company go all-in on scaly, centuries-old creatures like this since Tom Selleck re-signed with AAG. (Peacock)

The Found Footage Phenomenon — The guys from Orlando's own Haxan Films are curiously absent (at least as talking heads) from this documentary profile of a horror genre they all but created with The Blair Witch Project. Then again, O. Henry probably wouldn't want to be remembered as the guy who made M. Night Shyamalan possible either. (Shudder)

The G Word With Adam Conover — The "G" stands for "gubmint" as the former star of Adam Ruins Everything explores the often-curious workings of high-level bureaucracy. This is another of those Higher Ground media projects by Barack and Michelle, but expect slightly more red tape than you'd find in an episode of Waffles + Mochi. (Netflix)

Jackass 4.5 — Leftover footage from last February's theatrical release Jackass Forever is compiled into a supplementary feature of outrageous stunts. Or did I mean "suppository"? (Netflix)

A Perfect Pairing — An up-and-coming winemaker finds love while working on an Australian sheep farm, in what could be the best combination of intoxicants and farm animals since the last CPAC. I'm sorry, that was a low blow. I'm sure nobody at CPAC drinks! (Netflix)

The Photographer: Murder in Pinamar — Delve into the 1997 slaying of photojournalist José Luis Cabezas, who was kidnapped, tortured and killed just for snapping pictures of a shady business tycoon at a swanky beach resort. So yeah: Not quite as bad as running into Ezra Miller. (Netflix)

Premieres Friday:
Chip 'n Dale: Rescue Rangers — John Mulaney and Andy Samberg are the voices of the beloved Disney duo in a reunion flick that promises plenty of po-mo elbow ribbing for the jaded now-adults who grew up on them. Honestly, what I really wanted was a revival of Warner Bros.' Mac and Tosh with Gilbert Gottfried in both roles, just repeating "No, after you" for 90 minutes straight. (Disney+)

Fuck Love Too — The sequel to 2019's Dutch rom-com Fuck Love catches up with its cast of characters to see how their relationships are doing. Given that one of the plot threads this time involves two of the women getting pregnant by the same guy, it seems the answer is "Could be better, but thank God we're not in Louisiana." (Netflix)

Ghost in the Shell: SAC_2045 — Season 1 got dragged by fans and critics alike for watering down the kicky aesthetic of the seminal Japanese cyberpunk franchise. But for Season 2, the production team has hit on a way to win back the hearts of even the pickiest otakus: Every character has been redrawn to look exactly like Scarlett Johansson. (Netflix)

Love Death + Robots — Season 3 of the anthology series includes a sequel to Season 1's "Three Robots," in which a trio of automatons were seen rifling through artifacts of the extinct human race. I can't reveal my sources, but I understand the big reveal is that they've actually been at Orlando Fashion Square the whole time. (Netflix)

My Next Guest Needs No Introduction With David Letterman — Dave's guests this season include Will Smith, in a segment that was filmed before the 2022 Oscars. For more on things that have no value at this late date, ask me about my vasectomy. (Netflix)

Night Sky — Seeking to tighten its grip on the genre of metaphysical homestead sci-fi after having given us Outer Range, Amazon Prime casts J.K. Simmons and Sissy Spacek as a retired couple who discover that their garden shed contains a portal to another planet. See, that's why you have to clean out those things regularly: You never know what's knocking around inside. One time, I found a hornet's nest! (Amazon Prime)

Now & Then — Twenty years ago, a group of Miami college friends had a wild weekend that one of them didn't survive. Flash forward to the present, as the survivors come back together to confront an adversary that won't let them forget the horrors of their youth. The good news is that if they just wait a few years, the rising South Florida tides are going to flush that damn Pennywise right out of the drain for them. (Apple TV+)

RuPaul's Drag Race All Stars Season 7 and Untucked Season 4 — Eight past winners from across the Drag Race franchise compete in a season that has guest judges including Cameron Diaz and Ronan Farrow and special appearances by the likes of Vanna White and Nancy Pelosi. Excuse me, but aren't there more pressing matters in this nation right now? Vanna White needs to be figuring out how she's going to preserve women's healthcare! (Paramount+)

The Valet — In this American remake of the 2006 French feature, a parking valet at a Beverly Hills restaurant helps a customer out of a P.R. jam by posing as her lover. "I've made a huge mistake," tweets O.J. Simpson, for entirely unrelated reasons. (Hulu)

Premieres Monday:
Prehistoric Planet — Sir David Attenborough narrates a five-episode docuseries about the dinosaurs that roamed the Earth 66 million years ago. Or, if you got your textbooks from Texas, "last March." (Apple TV+)

Premieres Tuesday:
Yo! MTV Raps — DJ Diamond Kuts and Conceited co-host a revival of the seminal hip-hop show. At the same time, 50 old episodes are available for streaming — so the younger generation doesn't have to take your word for it that there used to be two guys called Dr. Dre before Suge Knight held one of them out a window. (Paramount+)