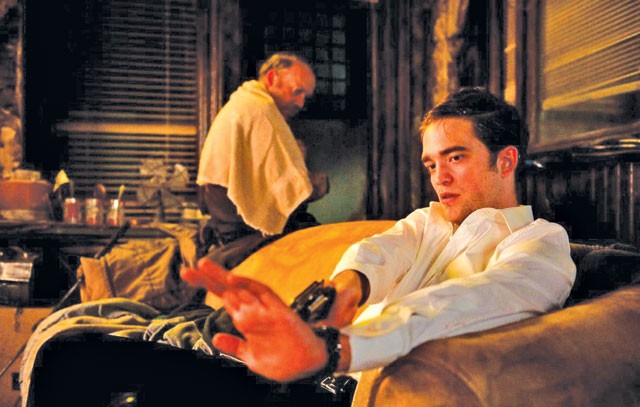 After seeing Cosmopolis, you're going to want to take a shower. David Cronenberg's latest offers a dark, filthy vision of the world with a story that takes on more of the Big Issues than it can satisfyingly address. All the action takes place in one day, most of it's confined to the back of a limousine, and the claustrophobia is palpable. The quote that begins the film – "a rat became the unit of currency" – is surprisingly on point, as those disease-carrying rodents are a recurring motif of degradation and disgust.

It's tempting to think of this as a comment on the Occupy movement, but while the main character embodies all that's wrong with the top

1 percent, Don DeLillo's source novel of the same name actually predates the financial meltdown by half a decade. What's more remarkable is that Cronenberg was able to translate DeLillo's trademark clipped dialogue and airless, corrosive narrative into an interesting, if largely uninvolving and unlovable, piece of work.

Eric Packer is a 28-year-old financial whiz who wants to get a haircut on the other side of Manhattan. The first act is shot almost exclusively in his tricked-out limo, as he drinks, broods, monitors a risky speculative investment and holds court with various visitors. Each of these meetings feels like its own vignette – a conversation with computer expert Jay Baruchel; a briefing with a young banking savant; casual sex with Juliette Binoche. The limo slowly crawls through the gridlocked streets, and accordingly, the story plods along in an equally unhurried manner.

Robert Pattinson plays Packer with an assured level of detachment and scorn. Make no mistake, this is Pattinson's film – I can't think of a scene that he's not in – and he isn't called on to show much range or feeling, but does display some strong chops. He plays affectless well, managing to conduct a business conversation with Samantha Morton while the limo is being vandalized and literally shaken back and forth by an angry mob. All he wants is to feel something – anything – and so his planned excursion to the barbershop his dad used to take him to takes on deeper meaning.

Despite the darkness in its belly, Cosmopolis is not without its fleeting moments of fun: Packer hears that his business gamble is hemorrhaging the company's savings during a prostate exam; former Bond villain Mathieu Amalric has a brief appearance as a self-described "pastry assassin." The dialogue between Packer and his bodyguard, who has just learned of a "credible threat" on the billionaire's life, is unusually stilted and enjoyable.

But for all of that, there are too many loose ends and plot points that end up petering out. Like a funeral procession for a Sufi rap star, it doesn't deliver the commentary on celebrity that it strives for. The scenes with Packer's wife, played with admirable femme-fatale gusto by Sarah Gadon, are frustratingly obtuse, and by the time Paul Giamatti hams it up in the final scene, you may have already lost most of your goodwill toward the film.