In the tradition of adorable Disney sidekicks, ‘Raya and the Last Dragon’ features a plucky young girl and her trusty ... pill bug? 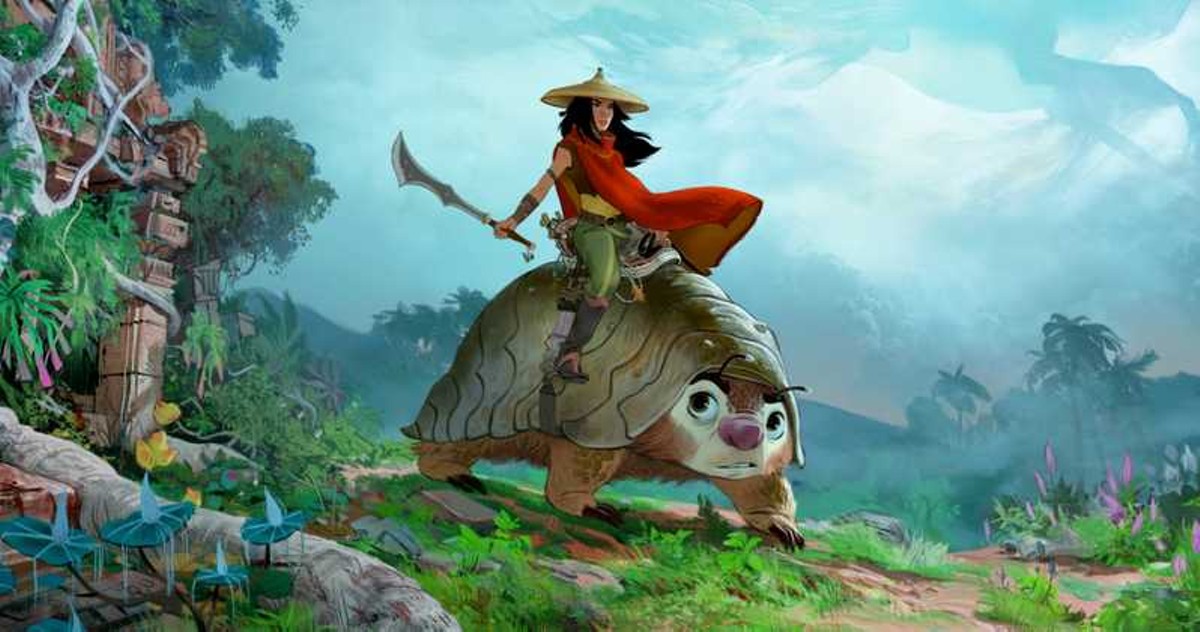 Premieres Wednesday:
Moxie! — Apparently, Amy Poehler wants to clarify that some "cool moms" are actually cool, not pathetic vicarity cases like the one she played in Mean Girls. Because she both directed and co-stars in this flick about a teenager who relies on her mom's example to combat sexism at her school. Personally, I think the high-water mark for Poehler as a moral force was her portrayal of ACLU lawyer Cricket Feldstein in Hamlet 2, but y'all ain't ready to have that conversation. (Netflix)

Kamp Koral: SpongeBob's Under Years and The SpongeBob Movie: Sponge on the Run — To inaugurate its relaunch as Paramount+, the former CBS All Access presents an all-new SpongeBob feature, along with a prequel series that drops in on our waterlogged hero and his pals when they were still wee tykes. Somebody in corporate must be desperate for a pull quote designating their beefed-up new service as "Sponge-worthy." So let's not give it to 'em! (Paramount+)

Lucky — Fresh horror about a female self-help author whose experiences with a stalker undermine not only her career but her sanity. Gee, and I always thought Marianne Williamson had it together. (Shudder)

Persona: The Dark Truth Behind Personality Tests — It's time to question your Myers-Briggs rating, according to this probing documentary that casts a suspicious eye on the history, intent and results of personality evaluation. As an Intuitive Empathic Introverted Pescatarian, I'm ready to believe anything they say. (HBO Max)

Coming 2 America — Maybe when the COVID is finally over, we'll get that Eddie Murphy stand-up tour he's been teasing for years. In the interim, here's the long-awaited sequel to his classic Coming to America. Hey, you know what else was a long-awaited sequel? Bill & Ted 3! (Amazon Prime)

Boss Level — I've made it my policy to never again waste a single word on any movie that relies on the threadbare premise of some poor guy being forced to live the same day over and over again. So instead of saying anything further about the sci-fi thriller Boss Level, I would like to remind you to adopt instead of shop, that Epstein didn't kill himself, and that having a harmless little Onlyfans account doesn't make your sister a whore. Thank you. (Hulu)

Raya and the Last Dragon — Following the precedent it set with Mulan, Disney is charging viewers an extra "Premier Access" fee to stream this animated fable at the same time it's in theaters. Raya follows a young girl whose hope of saving the world relies on the possibility that dragons might not be completely extinct. And in the tradition of adorable Disney sidekicks, she's accompanied by ... a pill bug? Sheesh, for that upcharge, you think we'd at least get a Gila monster. (Disney+)

Sentinelle — Olga Kurylenko stars as a French soldier whose quest to avenge her sister's rape takes her into the heart of Russian oligarchy. Or the omelet bar at Mar-A-Lago. You know, six of one. (Netflix)

Bombay Rose — The streets of Mumbai are the setting for a trilogy of animated love stories that were painted frame by frame over the course of 18 months. Which, as you may know, is roughly the amount of time it takes Richard Linklater to parallel park. (Netflix)

COVID Diaries NYC — The first wave of the pandemic is documented by a quintet of filmmakers between the ages of 17 and 21. In the surprising conclusion, they all decide that making actual movies is too risky and take their act to Onlyfans. Vive le upcharge! (HBO Max)