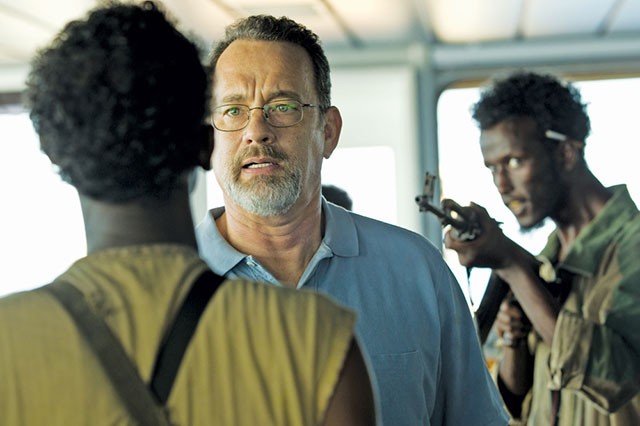 If you’re unfamiliar with the events of April 2009, when an American cargo ship was hijacked by Somali pirates off the coast of Africa, do yourself a favor and do not Google the incident before seeing the film adaptation starring Tom Hanks. You’ll certainly get no spoilers here, as not knowing the details and outcome in advance dramatically enhances this smart, tense thriller.

The story is simple – Dog Day Afternoon simple. It’s no masterpiece on the scale of that 1975 bank-robbery classic, but both films powerfully capture high-stakes games of cat-and-mouse, allow you to understand and relate to their characters, and end with emotional wallops.

Hanks plays Captain Richard Phillips of the Maersk Alabama, which was transporting commercial cargo and, ironically, food aid for Somalia when it was overtaken by four gun-toting pirates. Phillips and his crew of about 20 men were unarmed and had only the boat itself for protection when the outlaws launched their brazen attack, making international headlines.

Captain Phillips, directed by Paul Greengrass (United 93 and The Bourne Supremacy), is a penetrating, realistic glimpse into that attack, one that stereotypes neither the heroes nor the villains. While we do see the evil of the hijackers’ crimes and are rooting strongly against them, we also see their desperation, as this is simply the only life choice available to them if they want to prosper. “I come too far,” the lead pirate tells Phillips in a rare moment of openness. “I can’t give up.”

Needing no fictional embellishment, the screenplay by Billy Ray, based on the book by Phillips himself, nevertheless changes a few minor details of the actual event, but that matters little. What does matter is an overuse of handheld camera, which is a favorite of Greengrass. That often annoying style is mostly warranted here, though, considering the high-seas setting, the cramped spaces and the frenzied feel. Still, if you’re bothered by a jerky camera, you might want to sit toward the back of the theatre and take your Dramamine lest you feel as seasick as the characters.

Despite some unexpectedly great performances by the novice actors playing the Somali pirates, especially group leader Muse (Somali-native Barkhad Abdi), the film belongs to Hanks. He may not quite be the Hanks of Forrest Gump or Philadelphia, but he’s certainly the Hanks of Apollo 13 and Cast Away, in total command of his performance and his audience, and a pleasure to watch. It’s good to have him back at the top of his craft, and doing a decent job with his dialect, after his embarrassingly bad accent work in Cloud Atlas. Look for his sixth Oscar nomination, and his first in 13 years.

Though a little choppy and overly long in its third act, Captain Phillips does much more than simply stay afloat – it holds your attention in a vice grip for more than two hours and firmly positions itself as one of the top 10 films of the year so far.