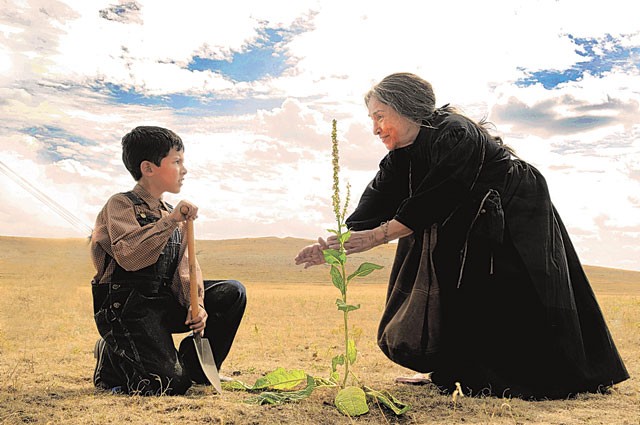 The independent film Bless Me, Ultima is based on the most widely read and best-selling novel of the Chicano literary canon, according to the film's press kit. Written by Rudolfo Anaya and published in 1972, the book tells the coming-of-age story of a young boy under the guidance of his mentor – a curandera or healer – in New Mexico during the Second World War. Even though the novel has been included on a list of most frequently challenged books in U.S. school systems for its sexual references and violence, the film has a potentially immense built-in viewership due to the fact that it's been so widely read.

The film won't disappoint fans of the book, although they may regret some of the adaptation's necessary condensation and/or elimination of narrative themes and events. Fans may be surprised, however, by who penned the adaptation and directed this young boy's story: Carl Franklin, whose directing career has gravitated toward television after the box-office disappointments of his early, violent-crime films, One False Move, with Billy Bob Thornton, and Devil in a Blue Dress, starring Denzel Washington in the role of Walter Mosley's detective, Easy Rawlins. Franklin followed up these two thrillers by directing the screen adaptation of Anna Quindlen's family-illness drama, One True Thing, with Meryl Streep and Renée Zellweger, but this, too, fizzled at the box office. Bless Me, Ultima deserves to be the film that gets Franklin back on track.

As the film opens, it's 1944 and Antonio (Luke Ganalon) is a 7-year-old boy. The youngest child in his family, Antonio is more meditative than his older brothers and sisters. "Why is there evil in the world?" he asks at the start – an especially pertinent question in light of the fact that his three eldest brothers are away at war fighting Nazis. His mother (Dolores Heredia) hopes that Antonio will grow up to be the family scholar, while his father wants him to continue farming the land with him and his brothers (once they return from Europe). Then, the aged Ultima (Miriam Colon) arrives and moves in with Antonio's family, with the intention of living out the last days of her life there. Although neighbors and townspeople whisper that Ultima is a bruja (witch), she emphatically insists that she is a healer. Over time, she teaches Antonio her practices and trains him to gather native plants for medicinal purposes and to listen to nature and respect it.

A great many incidents occur as the film progresses: Men suffer from PTSD; the town barkeep and barber, Tenorio (Castulo Guerra), becomes an enemy when one of his daughters (who are rumored to be witches) dies after Ultima counteracts a spell; a cathouse nearby adds to the dissolution of the town's menfolk; Antonio faces difficulties fitting in with the other kids at school; and much more. Yet the heart of the story is the time spent between Antonio and Ultima – the past and the future sharing their mysteries, and Ganalon and Colon are terrific in these roles. Filmed in New Mexico, Bless Me, Ultima visually captures the area's distinctive geography and light. Director of photography Paula Huidobro makes the landscape appear to be an active element in the story. Although Bless Me, Ultima can feel a bit overstuffed, it's an honest and naturalistic kids' story about growing up Mexican-American.