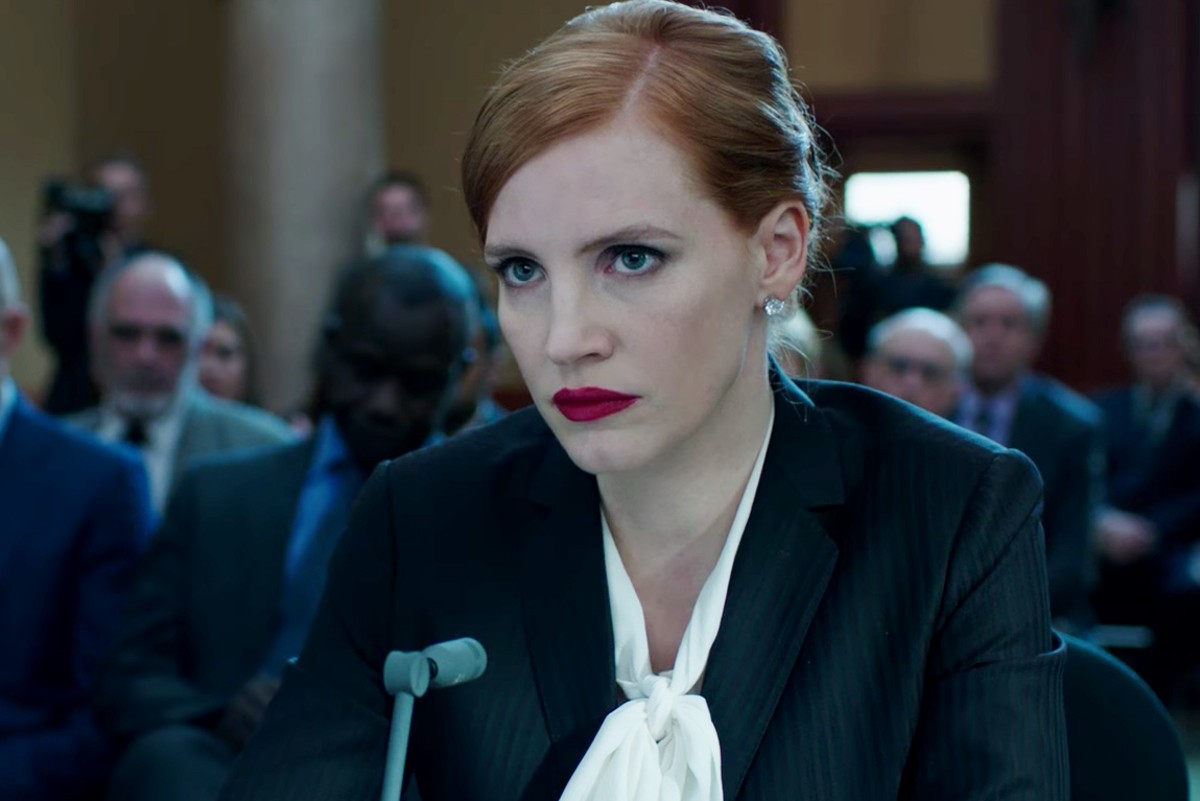 Jessica Chastain’s acting career may still be red-hot, but her heart is as cold as ice in Miss Sloane, the new political thriller by director John Madden.

Chastain plays the fictional Elizabeth Sloane, one of our nation’s most powerful political lobbyists. Accustomed to consistent victories, Sloane nevertheless always has tricks up her sleeve to guarantee a win when the going gets rough – and it usually does. This is Washington, D.C., after all. But when she agrees to fight the odds and battle the gun lobby, she might have taken on more than she can handle.

Madden, though not usually regarded as a top director, nevertheless has a quietly impressive résumé. He’s given us Shakespeare in Love, which won the Oscar for best film of 1997, along with Mrs. Brown, Proof and The Debt. But he’s also responsible for a couple of Marigold Hotels that aren’t worth checking into. In Miss Sloane, he seems back near the top of his game, at least in the thriller genre. But it’s also important that this film succeed as a drama, and in that regard, it seems forced, too frenetically paced and too artificially energized by its intrusive score and tracking shots – as if Madden were filming a television show instead of trying to assemble an impactful two-hour film.

Admittedly, that’s not much of a complaint, given how good television has become, but a film such as this needs an emotional center, and this one doesn’t find its heart until about halfway in, when we realize to what depths Sloane will stoop to win. Credit Gugu Mbatha-Raw, as one of Sloane’s assistants, for that, but thanks should also go to an accomplished supporting cast that includes Mark Strong, Alison Pill, Sam Waterston, John Lithgow, Jake Lacy and, best of all, Michael Stuhlbarg, who provides much-needed humor and vulnerability in contrast to the immoveable steel facade of Chastain, who gives a remarkably strong, if somewhat one-note, performance.

Despite the aforementioned dramatic warming in the second half, it’s ultimately the film’s embrace of that most overused tool of the thriller genre, the twist, that makes it most memorable. And this one has a dandy, if you can overlook its stretched credibility. But Miss Sloane, which is written by Jonathan Perera, is also noteworthy for its unique look at lobbyists and their relationship with Congress, not to mention the nauseatingly powerful gun lobby.

“When I take the stand, you’ll see nothing but a granite wall,” Sloane tells her lawyer as she prepares to appear in front of Congress on charges of violating ethical standards.

Indeed, a granite wall is just about all we see from Chastain throughout the film. But I still couldn’t look away for fear I might miss the moment she cracks.