A Q&A with Jerusha Hess and JJ Feild 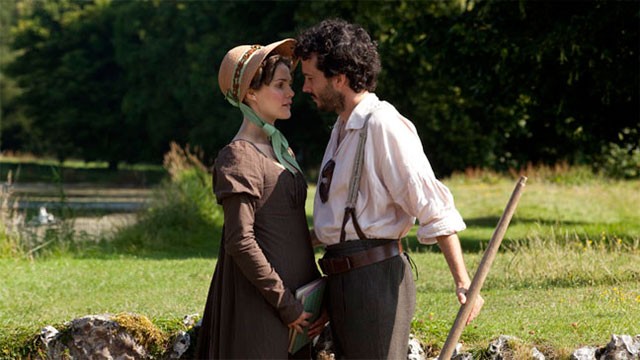 Infuse Joe Wright’s glossy Pride and Prejudice with the fondant-colored, overdone costume design of Sofia Coppola’s Marie Antoinette, then add the absolute absurdity of Jerusha Hess’ Napoleon Dynamite, and the resultant concoction is Hess’ latest: Austenland, based on the novel by Shannon Hale. Keri Russell plays Jane Hayes, an obsessive Austen fan whose toile de Jouy-papered apartment contains a life-size cutout of Colin Firth’s Mr. Darcy – who, upon realizing she’s 30-something and without an acceptable suitor, shells out her life savings to go to Austenland, a Regency-era-themed English estate akin to Colonial Williamsburg, except the costumed actors who populate the place are also paid to romance the park’s clients. On her quest for a storybook ending, Jane encounters a stinking rich, indecorous American (Jennifer Coolidge, mining her Legally Blonde airhead vein once again); a charming New Zealander working as a groundskeeper (Flight of the Conchords’ Bret McKenzie); and the staid, gentlemanly nephew (JJ Feild) of the park’s snobbish owner (Jane Seymour). We recently talked with Hess and Feild about Jane Austen, her fans and the movie.

Orlando Weekly: This movie looked like it was a lot of fun to make.

Jerusha Hess: We had a horrible time.
JJ Feild: It was hilarious. I’ve never laughed so hard at my job ever in my life. When you get to the end of the job and you’ve laughed from 4 in the morning when you picked up to when you go home at night, I think you’ve maybe laughed too much and nobody else will find it funny, but everyone else is finding it funny.

OW: I’m a big fan of Jane Austen, but the humor that she uses is almost austere, so it must have been a totally different thing to take this kind of movie and inject so much fun into it. Can you talk about that experience?

JF: Well, the humor of this film is obviously not just Jane Austen humor; it’s from the incredible lineage that Jerusha has of Gentlemen Broncos and Napoleon Dynamite and Nacho Libre, so you combine those two together and we can actually make it so funny.
JH: When I was talking to my production, I just said, “It needs to look like Jane Austen vomit, like Jane Austen herself vomited Regency all over everything.” And they just loved it because they were so excited to finally take the pitch out of their beloved genre.

OW: How familiar were you with Jane Austen’s work?

JF: Well, I grew up in England, so it was thrust upon us at a very young age as part of the school service. I’ve been bathed in Austen since grade school.
JH: And I studied English at Brigham Young University. I’ve read them all and I’ve seen all the adaptations and I love them. I think they’re so great, and it was just fun to take it to the nth degree.

JH: We definitely made the movie for Jane Austen [fans] – we were aware that they would see it. And we didn’t want to alienate them in any way because, you know, it’s the story of a Jane Austen fan. And I think we walked that line carefully without being overtly mean or disrespectful. We gently teased fandom – well, maybe not so gently – and I think, from what I’ve heard, the Janeites have loved it. We’ve had big special-interest screenings where they come all dressed up. They love it.
JF: At the premiere in Los Angeles, when we got to the end of the red carpet, there were half a dozen women – young women – dressed in Regency costume. And I thought, Well, that’s great of Sony Classics to plant a few Regencies. And I went over and sort of made a joke with them. But they weren’t plants, they were the Los Angeles Jane Austen Society.