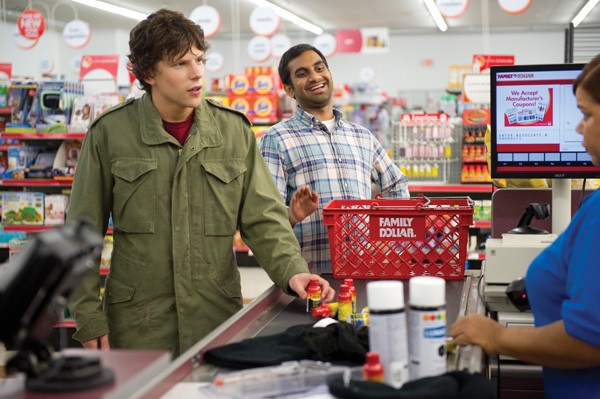 Welcome to the depressing world of director Ruben Fleischer, where “The Internet says … ” is all the exposition needed; where characters hurl obscenities like they just discovered curse words, and where those characters are played by actors who are old enough to have fathered children old enough to just be discovering curse words; where all involved are so utterly devoid of genuine emotion that the only way to distinguish the good guys from the bad guys is that the bad guys use words like “slumdog” and “pink dot” to refer to Indian characters – unless you count the former Marine, who doesn’t play a role in the film’s shenanigans until he’s beckoned to call Asians “gooks” and Latinos “beaners”; where two-thirds of the women with screen time do so happily giving blow jobs or lap dances or plotting murder conspiracies. The worst part of this nightmare land: It’s not funny. Not for a minute.

Fleischer, a former reality-show writer, is hardly the only culpable party in this wreck, in which Nick (Jesse Eisenberg), an overgrown pizza boy, is mugged and forced to wear a vest full of dynamite until he successfully robs a bank. Joining him – out of either loyalty or a sincere urge to cause himself bodily harm – is his longtime best friend, Chet, played by Parks and Recreation co-star Aziz Ansari. In his first major film role, Ansari debases himself, pulling his face and feigning surprise with every line reading. (It’s not a good sign when an on-the-rise young comedian chooses to emulate Chris Tucker, of all people.) It’s a flat, embarrassing performance, enough so to make you wonder how he hasn’t absorbed some acting chops, considering he’s surrounded by brilliant comedic minds in front of and behind the camera at Parks and Rec. The same goes for Danny McBride as the mastermind, so to speak, of the bomb plot. I recently rewatched his work in All the Real Girls, when he was a charming, raw unknown, and the contrast is telling: McBride, despite or perhaps due to his success, has soured. He telegraphs his spinning wheels with his eyes, and where they once felt alive with possibility, I can only read panic in them now. I’ve heard Will Ferrell discuss the pitfalls of signing on to a project only to discover that they expect him to make the script better all on his own, via improvisation. I’m beginning to wonder if that’s happening to McBride, who doesn’t possess Ferrell’s otherworldly gift for chaos. (Who else does, after all?)

At only 83 minutes long, 30 Minutes still feels drawn out. An opening dash to deliver some pizza before the promised 30-minute guarantee lapses was done much more inventively in Spider-Man 2 … seven years ago. In fact, the entire conceit – the reluctant, bomb-strapped bank robber/hostage – has become part of the TV procedural plot checklist by now. The screenplay by former Scott Rudin assistant and first-time scripter Michael Diliberti references Arsenio Hall, tanning salons, “That’s what she said” and Point Break alongside shout-outs to Facebook, Netflix and 5-Hour Energy drink. One can practically taste the dust being brushed off the clearly well-worn page.

Still, Fleischer brought together these incongruous, unfortunate elements, and considering how amateurish the entire production feels, he must be thanking his lucky stars daily that Zombieland earned him a mulligan.