When Hanukkah collides with Thanksgiving, November gets doubly delicious 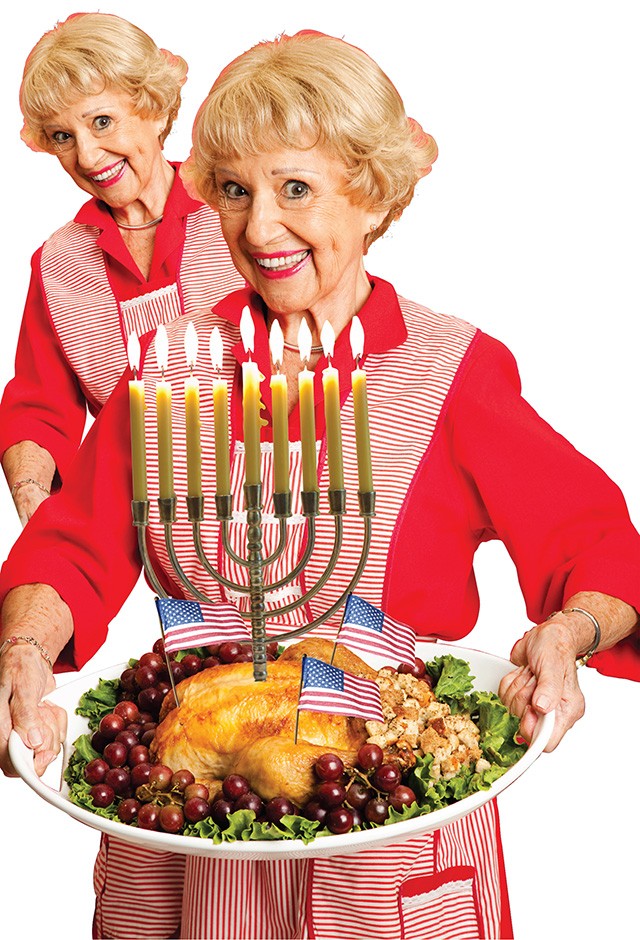 It’s an epic calendar collision that hasn’t happened since 1888 and won’t happen again for something like 80,000 years. It’s a head-to-head battle between two holidays that foodies look forward to all year.

This year Hanukkah starts on the evening of Nov. 27 and is celebrated through the evening of Dec. 5 (you just have to love an eight-day party), and Thanksgiving falls on Thursday, Nov. 28, making this week a once-in-a-lifetime intersection of food-focused family gatherings. Rather than picking one over the other or getting stressed about how to integrate all of the various traditions, here are some suggestions for combining the two holidays with wit. And keep in mind, even if you aren’t Jewish it doesn’t mean you can’t borrow some old-shul culinary swagger – it might mean giving up bacon and sausage, but any group that makes fried food a religious obligation is a group you wanna eat dinner with.

It’s true: Hanukkah, aka the Festival of Lights, commemorates an event that took place in 167 B.C.E. – a band of fighters defending their temple from attack was trapped so long that there was only one jar of oil left, which miraculously lasted eight days. The way Jews choose to remember that jar of oil is two-fold – the eight-armed menorah and the happy consumption of fried jelly doughnuts (sufganiyot) and shredded potato cakes (latkes). Below, a game plan for integrating your holiday.

That WASP-y relish tray (celery and carrot sticks, giant canned black olives) won’t do. On the other hand, you probably want to stay away from pork and shellfish, so some really good stuff, like angels on horseback (bacon-wrapped oysters) or millionaire’s bacon (bacon broiled with brown sugar), is out. Pimento cheese is a nice nod to the South (not to mention, Southern cuisine is on-trend right now), and it plays into the whole dairy-on-Hanukkah thing. (I don’t wanna go into the origins of that tradition; just Google “Judith and Holofernes” for the whole crazy story.) Add some collard-pecan (Southern again!) pesto, a decent flatbread or some high-end crackers, and some roasted spiced chickpeas for the crunchy people.

There’s no more apt combo of Hanukkah and Thanksgiving than a deep-fried turkey. You’ve got the trendy Southern-cuisine thing, the fried-food thing, plus the crowd-satisfying beauty of that big old bird on a platter. If you’re willing to part with the glorious whole-turkey tradition, though, there’s a recipe in Claudia Roden’s 1996 cookbook, The Book of Jewish Food: An Odyssey from Samarkand and Vilna to the Present Day, that could be adapted here to great effect. Called “Tagliatelle With Chicken From the Venetian Ghetto,” it’s a mix of pasta, garlicky oil, rosemary, pine nuts, golden raisins and roast chicken that could be prepared instead with a turkey breast.

The duh-obvious move here is challah. I say screw the obvious. Think different and go for an onion-bagel stuffing. Just substitute torn chunks of onion bagel in your favorite stuffing recipe – it’s great with bacon if you aren’t keeping kosher, and if you are, equally great with sauteed mushrooms. And kosher food manufacturer Manischewitz is producing a turkey broth this year, so you don’t even have to make your own.

Obviously you’ll be making latkes, but you might want to switch it up and throw in a few sweet-potato or even zucchini ones. With that much starch already on the table, mashed potatoes might be overkill. Dairy-rich purées are a Thanksgiving decadence to look forward to, though, so maybe a celeriac or parsnip mash is in order – plenty of cream and butter will give that silky, fluffy texture, but with a slightly more vegetal taste. If you’re doing the tagliatelle, avoid the purées altogether and go for sharp, lemony roasted Brussels sprouts or a kohlrabi-and-apple salad – something green and crunchy. Cranberry sauce needn’t change (and it’s great on latkes instead of applesauce!) – but a splash of port is a nice touch and cheekily mimics sweet, grapey Manischewitz wine, which you should probably skip altogether.

You’re definitely having doughnuts, but just how much deep-frying can one household support? No one will blame you if you serve store-bought. Jelly doughnuts need no gilding, but you can dress up cake doughnuts with a pumpkin-caramel-pecan glaze that might assuage the guilt of not making from scratch. Pumpkin, sweet potato, cranberries, pecans and maple are all trad Thanksgiving flavors that are wildly easy to transpose into other classic Hanukkah desserts like rugelach and noodle kugel. Or bake a pumpkin cheesecake. Recipes abound online; Saveur’s website offers a refined version with a hazelnut-gingersnap crust.