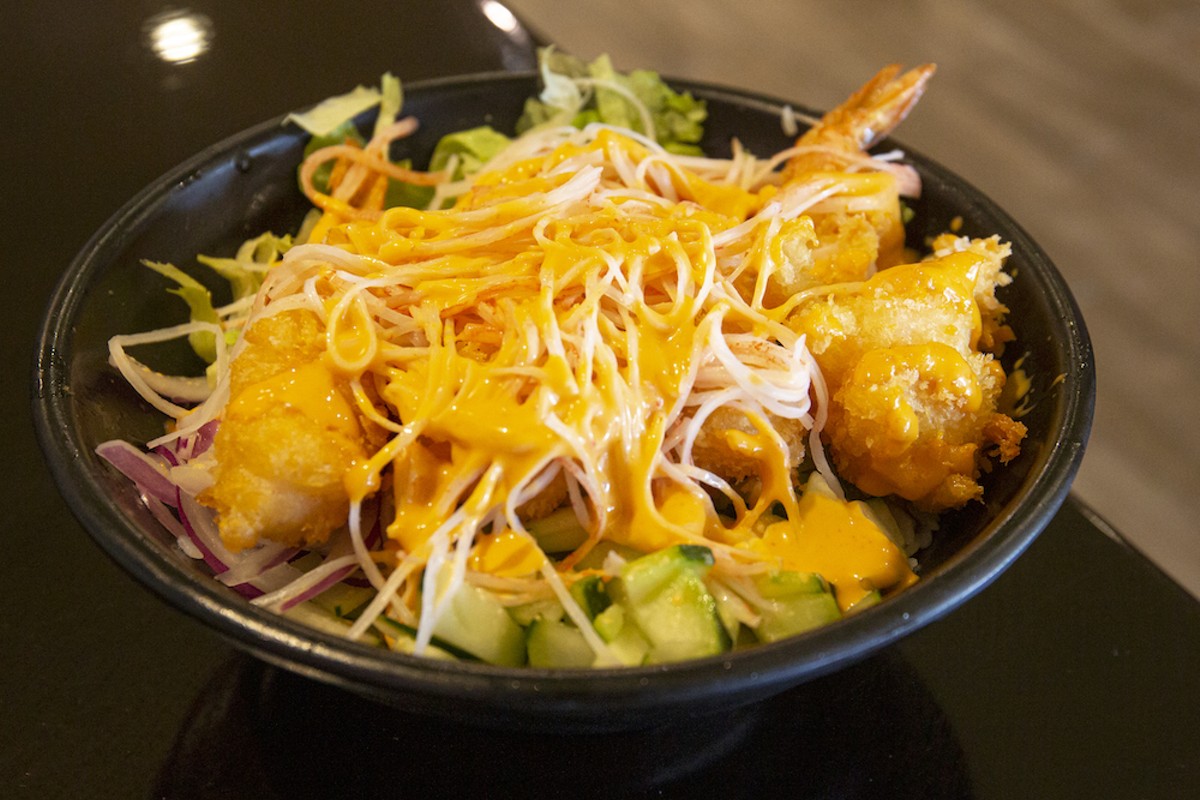 There was a fair bit of lamenting when OG soup house Sapporo Ramen said sayonara to the city's ramen cognoscenti and closed shop last December. After all, the Westside Crossings ramen-ya had been on the vanguard of Orlando's burgeoning ramen scene and occupied a special place in tonkotsu-soaked hearts.

But not two months later, Da Sun Ramen moved in to fill the void and, a month or so later, Tokyo Ramen Fusion Cuisine had those very same soupsayers pattering about just two doors down. It's where we set our sights and slurps one weekday evening, intrigued by the "fusion" aspect of the restaurant that took the place of Mr. Wong's. Of course, ramen, with its origins in China, is a fusion dish in and of itself, but a glance of TRFC's menu revealed ramen options with a distinct global influence in addition to a greatest hits compilation of Japanese cuisine.

High on our list of possible pre-soup starters were the gyoza ($5.95) and takoyaki ($6.95), but after navigating the language barrier with our Chinese server, we deduced the dumplings and octopus balls were of the frozen, not fresh, variety. Cut to a few minutes later and we were sinking teeth into glossy alabaster buns ($5.95) of braised pork belly, cucumber, scallions and a "Tokyo special sauce" bearing resemblance to a sriracha mayo.

The bao, along with deep-fried, batter-free, spice powder-dusted Japanese chicken wings ($5.95), were both fine and good, but we came for the ramen – and the tonkotsu ($10.95) was first up. Of note was the buttery, viscous broth that lubricates lips in a way only tonkotsu can. Chef/owner Kongcheng Wang boils down pork bones for nine to 10 hours to make the broth, and doesn't add MSG. The result is a deeply gratifying (and not overly salty) bowl of ramen made all the more so with thin cuts of chashu crisped around the edges, tamago, kikurage mushrooms and slurpy noodles. Swirls of naruto fish cake and scallions added to the visuals.

Of the ramens veering into international waters, the menudo ($11.95) came highly recommended – it's just as popular as the tonkotsu, we were told. If you're thinking the ramen comprised chunks of beef tripe floating in a peppery broth like the Mexican soup of the same name, you'd be wrong. I was too. No, this menudo was more like Vietnamese bò kho, with cubes of stewed beef, bok choy, cilantro, scallions, fish cake and tamago. We quite enjoyed sucking in the beefy liquid and squiggly noodles but, when compared to the Vietnamese soup that inspired it, the menudo wasn't quite worth its weight in broth.

Other fusion-y soups offered here include a kimchi ramen ($11.95), hot and sour ramen ($10.95) and curry ramen ($10.95). Ramen aside, what really impressed was the unagi-don ($15.95). In between bites of everything else, we kept going back to this bowl of tare-glazed grilled eel atop pickled daikon, cucumber and steamed rice. Also impressive: the fruit teas ($3.99) – passion fruit and lychee – we ordered. By the way, beverages are in great supply here: fruit teas, milk teas, smoothies, matcha, plum wines, sakes and beer.

The dining room is open but limited to 50 percent capacity with social distancing measures implemented. Servers wear masks, and booths and tables are wiped down after use. In fact, I could smell the disinfectant when we sat down – but it proved comforting. Believe me, I'll take an air of Lysol over an air of mystery any day during these times.