We shake up an Old Pal, but our relationship is better for it

It's always an iffy proposition to Remix a favorite. If I already love a drink, why mess with it? This is why, so far, you haven't seen a Negroni Remix – the three-part harmony of Campari, gin and sweet red vermouth is so perfect, so simple, that there's no percentage to changing it. Well, caveat: not yet. I'm always tinkering with the recipe, changing the proportions from the classic 1:1:1 or subbing in different bitter liqueurs or vermouths; I just haven't improved on the original – yet.

Luckily, there are many established variants on the Negroni that have been around long enough to be considered classics in their own stead, so I can mess with them instead. I've already taken on the Boulevardier ("Our Remixed Boulevardier is a spicy kick in the head," Nov. 5, 2013); this month, it's the Old Pal. The Boulevardier swaps in bourbon for the Negroni's gin; the Old Pal swaps in dry vermouth for the Boulevardier's sweet. It may seem we're getting farther and farther away from the Negroni, but Campari is a powerful constant, and so is the traditional 1:1:1 ratio.

So what to do with an Old Pal? I saw blood oranges in the market recently and decided I wanted to try making an oleo-saccharum. Don't be scared off by the name; "oleo-saccharum" sounds more complicated than it is. Relatively easy to make and a valuable team player in cocktails of all sorts, though traditionally used in punches, oleo-saccharum is nothing more than citrus peel macerated with sugar until it draws out the oils from the fruit peel into a thick sweet liquid. (Oleo = oil, saccharum = sugar; thus endeth your Latin lesson for the day.) Once I had the oranges peeled, I juiced them so the fruit wouldn't go to waste, at which point I recalled how well blood orange juice goes with Campari, and the die was cast. The Old Pal became a New Friend.

Adding not just oleo-saccharum, but also juice to the holy trinity will make cocktail purists shudder; toying with the proportions is about as far as most bartenders will go. But what the hell. When making a new acquaintance you want to go a little easier, be a little sweeter (while not hiding your spicy self), hence the addition of these two nonalcoholic ingredients, and hence the substitution of Aperol for Campari and Cocchi Americano for the white vermouth. All in all, it's a softer, sweeter cocktail, but make no mistake: Even with the addition of a bit of juice and sugar, this drink is still mostly liquor. Stir well with plenty of ice to get some dilution, particularly if you're serving the cocktail straight up.

Add the spirits to a mixing glass half-filled with ice. Stir for 15 or 20 seconds, until well-chilled. Strain into a cold glass. 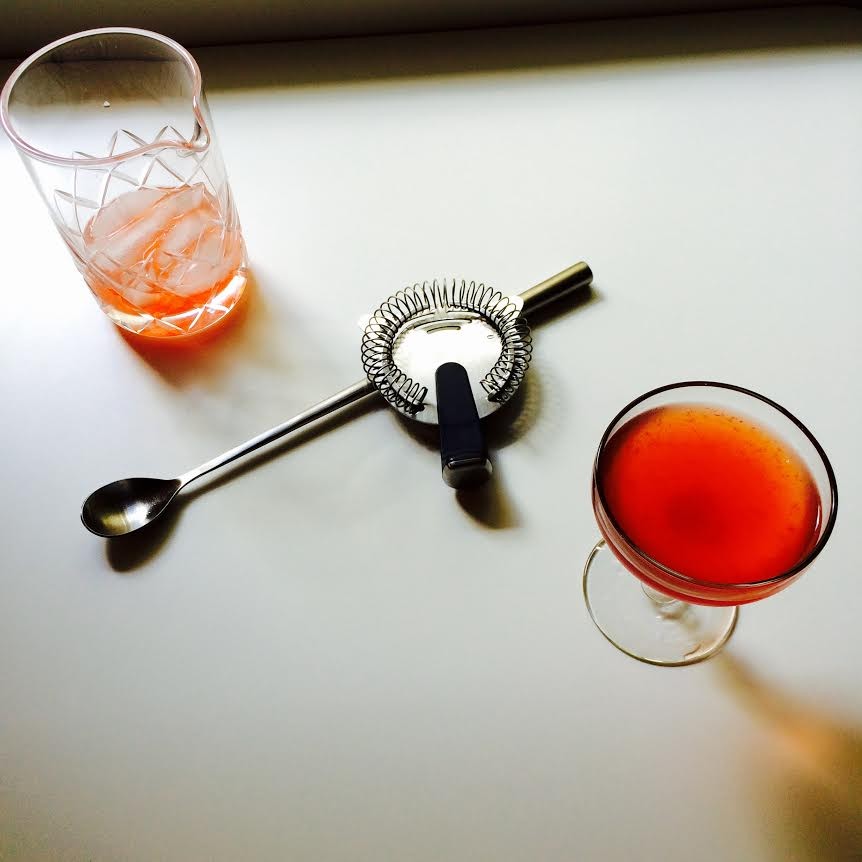 First, make the oleo-saccharum: Peel three or four blood oranges using a vegetable peeler, trying to avoid the white inner pith. Place peels in a wide, shallow bowl and add roughly 2 ounces of white sugar; then use a muddler to grind the sugar into the peels. Within a half-hour, the sugar will begin to draw the oil out of the peel; within an hour, the oil should dissolve the sugar, leaving behind the oleo-saccharum. It's not an exact science, so just keep an eye on things until you have a thick, clear liquid.

Add the spirits, juice and oleo-saccharum to a mixing glass or shaker half-filled with ice. Stir or shake well, then strain into a chilled glass.