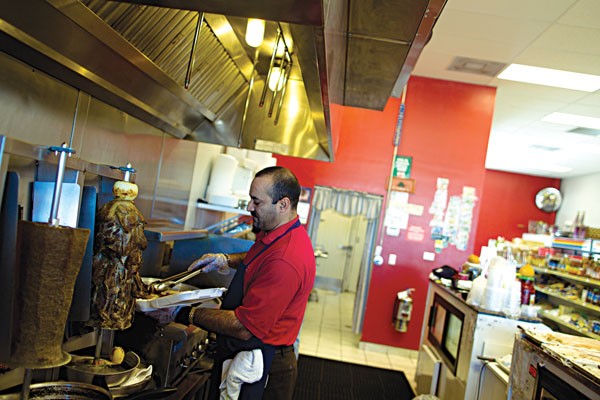 Photo by Jason Greene
Holding out for a gyro: Many varieties of spit-roasted meat available at Cedar, but all are halal

Haidar Ahmad, the gracious and welcoming proprietor of Cedar Halal Food & Deli, is a man of principle. After 15 years as part owner of Ali Baba’s in Longwood, Ahmad sold his stake when the popular Persian eatery added a bar and commenced serving alcohol to patrons. Ahmad’s a devout Muslim and, naturally, not the bibulous type, so in the spring of 2008, he set up shop in the Colonial-Alafaya corridor with the hope of attracting the scores of Muslim students attending UCF. Judging from the steady stream of customers we witnessed on two separate occasions, the plan appears to have worked.

Situated next to the Stanpol Polish Deli, Cedar is less restaurant and more grocery-deli. The reds and whites of the Lebanese flag dominate the color scheme, and a few tables are strewn about for those who want to dine in. While the menu comprises a hodgepodge of familiar Mediterranean fare – specifically dishes from Ahmad’s native country, Lebanon – only certified halal meat is served, meaning beef, chicken and lamb ritually slaughtered according to Islamic law. Of course, no dish exemplifies the exotic and aromatic nature of Lebanese cuisine more than the mushroom Swiss burger ($5.99). Ah yes, biting into one conjures scenes of sidewalk dining along Beirut’s Corniche, and of hearing an accented waiter ask if we’d like fries with that. OK, so there are a handful of American faves on the menu, but for what it’s worth, the burger was quite flavorful and packed a  mushroomy punch.

On our first visit, we started off with grape leaves ($4.99) that varied in both circumference and texture. The rice in some of the rolls wasn’t cooked enough, so we turned our attentions to the enormous kibbeh ($5.99). This starter was more to our liking, with a layer of seasoned minced beef and cracked wheat encasing another, smaller layer of more mince, pine kernels and onions. If there’s just one dish you eat here, make sure it’s the hummus ($4.99). It may have been the tahini, or it could’ve been laced with some unknown stimulant, but we just couldn’t get enough of the chickpea dip. (Note: Hummus is included with many of the sandwiches and platters.)

It’s hard not to be tempted by the rotating vertical spits of roasting meat behind the counter, so we gave in and ordered some shawarma ($5.99 sandwich; $9.99 platter). As a platter, the shaved morsels of plush beef and lamb are served over rice colored with vermicelli and a side of tahini slathered over lettuce, tomatoes and radishes. While some chunks were chewy, it didn’t mar our enjoyment of the beef kebabs ($5.99), plated with yellow rice and sided with crack … er … hummus. Chicken kabsa ($11.99), a Saudi rice dish offered as a special, was akin to Indian biryani minus the intoxicating pungency. Turkish coffee ($2.50) and homemade baklava ($2.99) thickened with honey and orange-blossom water are hard to pass up. Don’t be surprised if you’re offered a cup of tea on the house.

Misfires notwithstanding, this little café and deli has a lot going for it, most notably Ahmad, who welcomes everyone like a long-lost friend. About Lebanon, someone once said: “Despite its shortcomings, it retains pockets of beauty and manages to charm you mostly through the warmth of its people.” That sentiment certainly rings true here.