It wasn’t that long ago that it seemed the South Eola dining and nightlife scene was all but dead after nails were hammered into the proverbial coffins of three anchor establishments in the Sanctuary condos: Sanctuary Diner (née Fifi’s Patisserie), iMansion (once the Beacon) and Graze. The economy and lack of foot and vehicle traffic were cited as reasons for their untimely demise, but don’t sound the death knell on South Eola yet. Nick Olivieri and Eddie Nickell, the pair that brought us the Funky Monkey Wine Company and Banana’s Diner, have, for now, stayed the execution.

Nick’s Italian Kitchen moved into the old Sanctuary Diner space, and Graze has been supplanted by the Prickly Pear, arguably the duo’s signature and highest-profile restaurant to date. When I reviewed Graze more than three years ago, I mentioned how its interior – sleek, streamlined and streaked with silver – evoked the icy mystique of Monica Vitti with the aloof dignity of Greta Garbo. In its current incarnation as the Prickly Pear, the sleek interior remains, but it more evokes the rockabilly kitsch of ’80s-era K.D. Lang with the Upper East Side ’tude of Bobby Flay. It’s an eclectic place, from the music (“Wondering Where the Lions Are”) to the wagon wheels by the entrance, the cactus candelabras and the bull’s horns hanging on the walls. Somewhere, a Cadillac is missing a hood ornament.

If not for their interior design skills, let’s credit Olivieri and Nickell for bringing Southwestern (not Tex-Mex) cuisine to Orlando. Journeyman chef Juan Mercado (Delfino Riviera, Rocco’s Italian Grille, Palio) ably helms the kitchen at Prickly Pear. He’s also the executive chef of Nick’s next door, but judging from the dishes we sampled at Prickly Pear, the double duty won’t affect the quality of the food. Granted, we would’ve preferred our bison burger ($13) not to be overpowered with balsamic vinegar, caramelized onions and bleu cheese, and the signature elk chop ($32) was far too rare to enjoy, but the latter was fixable. The chewy chop was rendered delicious when sent back and cooked to a medium-rare, and the bed of calabacitas (zucchini and yellow squash) spiked with a green tomatillo salsa offered a nice counterpoint to the game.

When Mercado’s on, he’s on – the roasted corn and green chili fritters ($6) and the hickory-smoked duck quesadillas ($13), served with a cranberry-pear chutney, are fine ways to start off a meal. Just take it easy on the complimentary biscuits and chipotle-butter spread. Smoky seafood chili ($23), our favorite dish of the evening, was a hearty bowl of calamari, mussels, shrimp, tilapia, cockles and beans in a rich sauce.

Wine is more than a mere afterthought, but cocktails hog the spotlight. If the agave margarita ($9) isn’t sweet enough for you, pricey campfire s’mores ($12) may supply the necessary sugar fix. As we ended with choux-pastry chocolate fritters ($9), we talked about beginnings – new beginnings for the area and the Olivieri-Nickell plan for reviving the dining scene. Here’s hoping these urbane cowboys ride into the sunset as heroes. 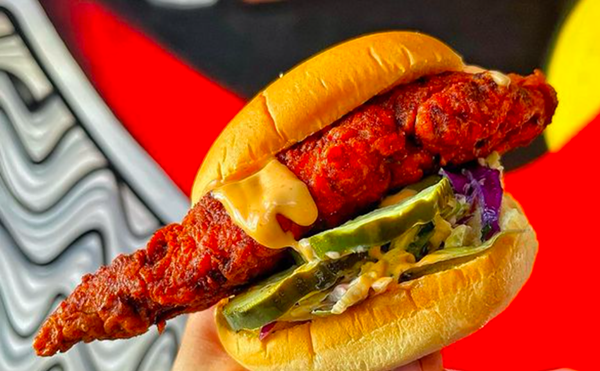