Tin & Taco is posher than your average taqueria

Evidently there was a need for a slightly more posh taqueria in downtown Orlando, so Rob Bair opened Tin & Taco for the adventurous palate. These are "craft" tacos being assembled here, don't you know, and they're served with frightfully good craft beer and "craft" sodas. Naturally, you'll pay more, but isn't that always the case when one wants to enjoy the finer (or funner) things?

Don't get me wrong: This is still proper-good downtown late-night food, even with its somewhat ambitious menu. Eight bucks scores your choice of two tacos, or the same ingredients in a burrito, rice bowl, or tossed in a bag of Doritos. An extra taco runs $3. Tortillas are sprinkled with cheddar, then grilled, which T&T's regulars really seem to like (me included).

Now for all the talk about "craft" tacos, it was a bit disappointing that the pork from the al pastor wasn't shaved off a vertical spit. The slow-braised shreds were, in fact, dry beneath the layers of pineapple pico de gallo, cotija cheese, lettuce and mango-pineapple vinaigrette. In all fairness, it is advertised as "al pastor style," but still. By comparison, the shredded chicken in the "Bourbon Street" was suitably moist, with chow mein noodles offering a nice crunch in a sweet bourbon-sauced, East-meets-West taco. The rice – and I've heard others echo a similar sentiment – seemed a bit undercooked, just as it was in the "Hail Caesar" bowl.

Chewing on the occasional uncooked rice kernel certainly didn't ruin the bowl for us, as there was plenty else to enjoy – that succulent shredded chicken for one, potato sticks and applewood-smoked bacon for snap and crackle, and pico de gallo, Parmesan cheese and Caesar dressing for added bite.

Fillings, you'll notice, incorporate plenty of tang, texture and color for that multisensory experience. Two notables are the "Tacosaurus" with its hefty assemblage of ground beef, crushed Doritos, pico de gallo, lettuce, and jack, cheddar and cotija cheeses. A slather of Southwest sauce makes it a winner in any format – taco, burrito or bowl. Dumping the ingredients into a bag of Doritos seems a bit gimmicky, but if you like it crunchy, go for it. The other is the "Taco Bomb," comprising the same ingredients as the Tacaosaurus but with a beer queso replacing the cotija cheese and potato sticks in place of crushed Doritos. It's arguably my favorite, and, according to the guy who prepared the taco, it's T&T's top seller. Don't feel shy about getting hot sauce from the pump dispenser – it enhanced the Al Pastor and Tacosaurus considerably. 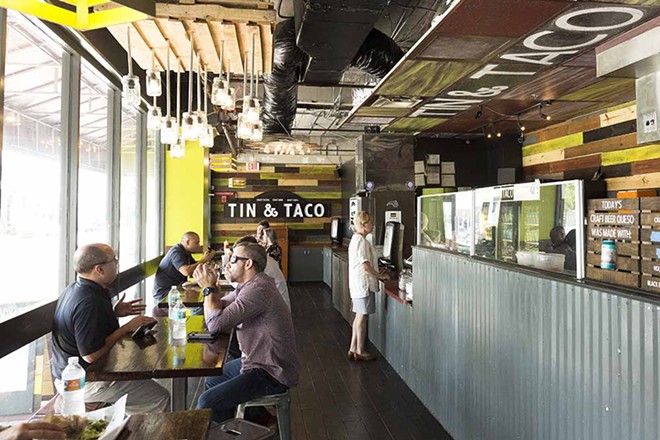 Chips and queso ($4) are wholly unnecessary; the chips weren't seasoned enough and the queso would've been better warmed up. There's a meatless option for vegetarians – a black bean/corn/quinoa mix, pico, lettuce, garlic-cilantro sauce, jack and cheddar, along with potato sticks – but vegans, unfortunately, get the short end of the potato stick. It's an oversight that could be easily remedied by the experienced Bair. Hey, even this worthy taco joint could do with a little, ahem, tin-kering.