The whitewashed, nautical digs of the Hampton Social are the setting for a menu executed with exquisite care

I'll admit, I had fantasies of inviting James Cuomo — the cantankerous Facebook "Hamptons Douche Spotter" — to dine with me at the Hampton Social, a restaurant playing into the vibe of the affluent seaside destination on Long Island. I mean, the man has documented countless incidents of summertime asshattery committed by entitled twats in every neighborhood from Southampton to Montauk, and he's been doing it since 2013: fat guys wearing tiny Speedos and fur coats inside restaurants, running up huge tabs and leaving zero tip; oblivious women seating their tiny dogs in highchairs; boneheaded drivers double-parked, sometimes perpendicularly.

I had hopes but, sadly, no such contemptible behavior was observed at this whitewashed hotspot that took over the old Tommy Bahama space at Pointe Orlando. What a letdown. Oh sure, the place looks like the setting of a J. Crew catalog photoshoot, and wannabes get a kick posing in front of the Instagram wall, but there's not much else to sneer at. Well, with the possible exception of our server, who felt it appropriate to keep her mask dangling beneath her lower lip the whole time.

So, we sipped not-so-potent $13 cocktails while taking in the not-so-ocean-breezy digs. Design-wise, Hampton Social does a nice job of bringing the outside in. The place screams BRUNCH, which is served on weekends from 10 a.m. to 3 p.m. Yet, despite the name, the Hampton Social isn't as superficial as it sounds.

Someone in the kitchen clearly takes great pride in the food coming out — a conclusion we came to after digging into a plate of beautifully charred grilled octopus ($18.50). It's a head-nodder of a dish, marinated in citrus, dressed with fennel, and served alongside roasted vegetables, beets, green lentils and orange supremes halved for bite-sized ease. 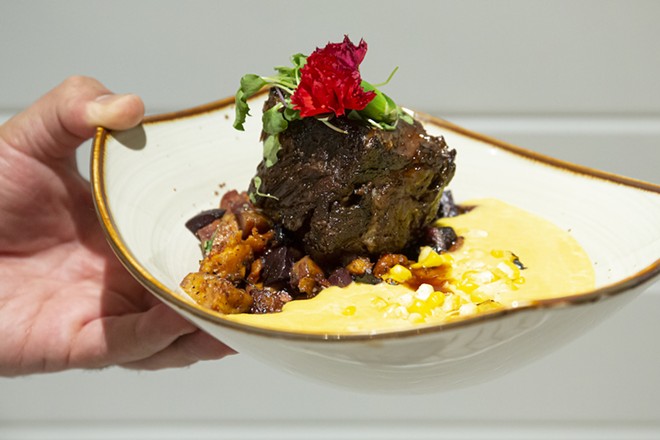 Then came the chicken lollipops ($15), their dark hue the result of a curry-soy marinade that lent these gams deep flavor. Nothing mind-blowing, but this is finger food the way finger food should be done. Even the smoked eggplant ($14), with a vibrant medley of veg and grains (cauliflower, lentils, onions, greens sprouts and more) took some thought and conscientious effort to construct. It came served on crispy shells of watermelon radish, garnished with feta.

Certainly not the level of attention we expected. A pleasant surprise? I'd say so. Even the self-proclaimed pizza snob in the group couldn't help but heap praise on the avocado corn pizza ($15), a cheesy, rustic pie topped with roasted tomatoes, garlic butter, basil and lemon zest. There's corn in the plate of braised short ribs ($28) as well — charred niblets floating atop a corn mousse — that upstaged the less-than-fork-tender slab of citrus-braised meat, the lone gaffe of the night.

Of course, it wouldn't be a meal in the Hamptons without a lobster roll (market price) and, I have to say, the meaty number served here truly wowed. You can choose "Manhattan style" (served warm with butter) or "Maine style" (cold with creamy mayo). In steamy Florida, the latter is the way to go. It's served with house-made chips, but do yourself a favor and upgrade to the mac and cheese (made with orecchiette) for $2 more, or enjoy it with a side of hearty New England clam chowder ($9).

Just as impressive were double-wrapped shrimp tacos that didn't shy away from the heat, packed with jalapeños, fresnos, a spicy aioli and citrus slaw. We couldn't find fault in tart Key lime pie ($9) served with strawberry gelato and mint-flecked whipped cream, or airy beignet-like doughnuts ($13). We quite enjoyed the latter with vanilla bean ice cream, hot honey and chocolate sauce.

Indeed, the Hampton Social wholly shattered my snarky notions about the place. This was no corporate-backed bastion of boors clad in Brooks Brothers, as I had initially assumed. Nor was it a place I'd take delight in mocking or ripping on. Frankly, I'm happy I didn't ask Mr. Cuomo to join me for dinner. Had he done so, the only douche spotted likely would've been me. 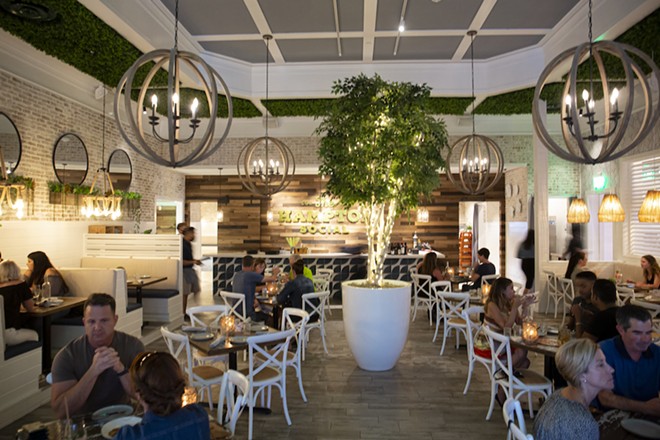