I do enjoy some good people-watching, and the multiculti mix of patrons energizing the enticing patio of Café 34 Istanbul – Orlando's first 24-hour Turkish restaurant – adds just as much sizzle to this sultry space as the platters of grilled kebabs. Seeing the buxom sashay past the burqa'd while kiddos gawk at the hairdos of Euro and Latin club kids makes for mesmerizing stuff. Toss in a few flummoxed date-nighters and the odd raki-soaked oldtimer and it creates one of those "only in Orlando" moments – instants when cultures collide and the world's citizenry dines in a spirit of détente, much like in the city of Istanbul itself. It's the sort of ambience that can't be bought or manufactured, and that alone lends Café 34 its distinguishing feature.

The lavas on the other hand, not so much. What's served here isn't the inflated, sesame-specked dirigible of unleavened bread, but one in its flattened, pre-made state. A newly installed oven should rectify this lavas debacle in a matter of weeks, but at a restaurant that's been open for six years, I'm not sure why it's taken this long. When the proper bread is finally served, it'll make the ezme ($7.95) – salsa's richer, racier and walnut-crunchier cousin – even more enjoyable. There's a warm hummus nestled with squares of pastrami ($13.95) just begging to be scooped with hot shreds of that bread but, in all honesty, the hummus is great on its own.

If you're thinking why pastrami?, it bears repeating that pastrami is a descendent of pastirma – the air-dried cured meat of Byzantine and Ottoman origin. Before being dried, this pastrami is coated in a fenugreek-based paste called çemen (that's pronounced "che-man," yo) and it is exemplary. That pastrami, along with a healthy addition of tomatoes, peppers and kashkaval cheese, is also stuffed inside the pacanga ($12.95), a fried pastry roll fashioned from yufka, a phyllo-like dough that, when fried, lends a brilliant crackle.

Moments between bites were filled by glasses of raki ($9). A fair bit of it. I thought of the scene in From Russia With Love when Bond and his Turkish contact, Kerim Bey, drink the stuff prior to an all-out brawl involving a couple of scantily clad belly dancers. "Ahh, raki. Filthy stuff!" Bey says before all hell breaks loose. No such pugilistic hijinks took place on this visit but, then again, swig after swig of the gut-punching anisette distracted us from most other goings-on in this sprawling patio. Hookah smoke billowed across the moodily dim ottoman lanterns suspended from the ceiling, and the music seemed to take on a more amplified thump. Or that could've been our pounding heads.

Meat. We needed meat, and meat we most certainly got in the Ottoman Pleasure ($64.95), a majestic heap of protein highlighted by the most luscious, lip-greasing lamb chops ever. Oh, there's more – spiced kofte meatballs; beef and chicken shish kebab; peppery lamb and chicken adana kebabs; and doner of the beef and chicken variety – all perfectly grilled, all royally succulent. There's a great mix of rice, cabbage, carrots, onions, tomatoes and fiery banana peppers, all bestowing their juices onto layers of flat bread beneath. Just know it could result in some epic meat sweats that no amount of Uludag sparkling mineral water ($4) or Turkish tea ($4) could suppress. Worth it? Hell yeah. (Now might be a good time to state that the Ottoman Pleasure is a dish intended for three or more people, thus the price tag.)

At $13.95, the kunefe – a glorious pistachio-topped dessert of phyllo threads, soft white cheese and thick syrup – is also very shareable. Managing to finish one on your own could result in, well, my full praise and respect. 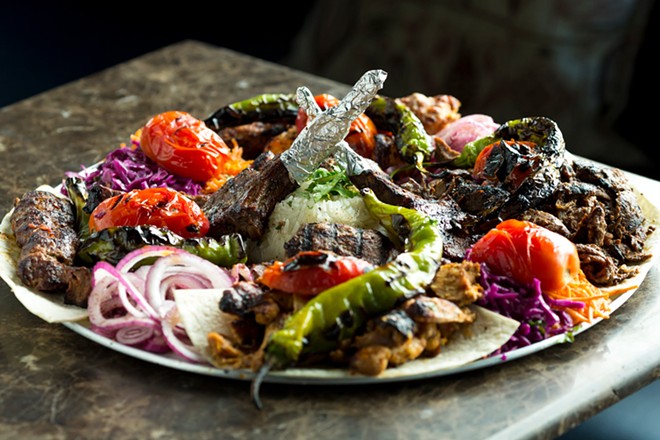 And what of the "34" in the restaurant's name, you ask? It's a reference to the vehicle registration code of Istanbul proper, a number that appears on all car license plates in the city. Bond may have possessed the "007" designation, but Café 34? Well, they've got a license to plate.