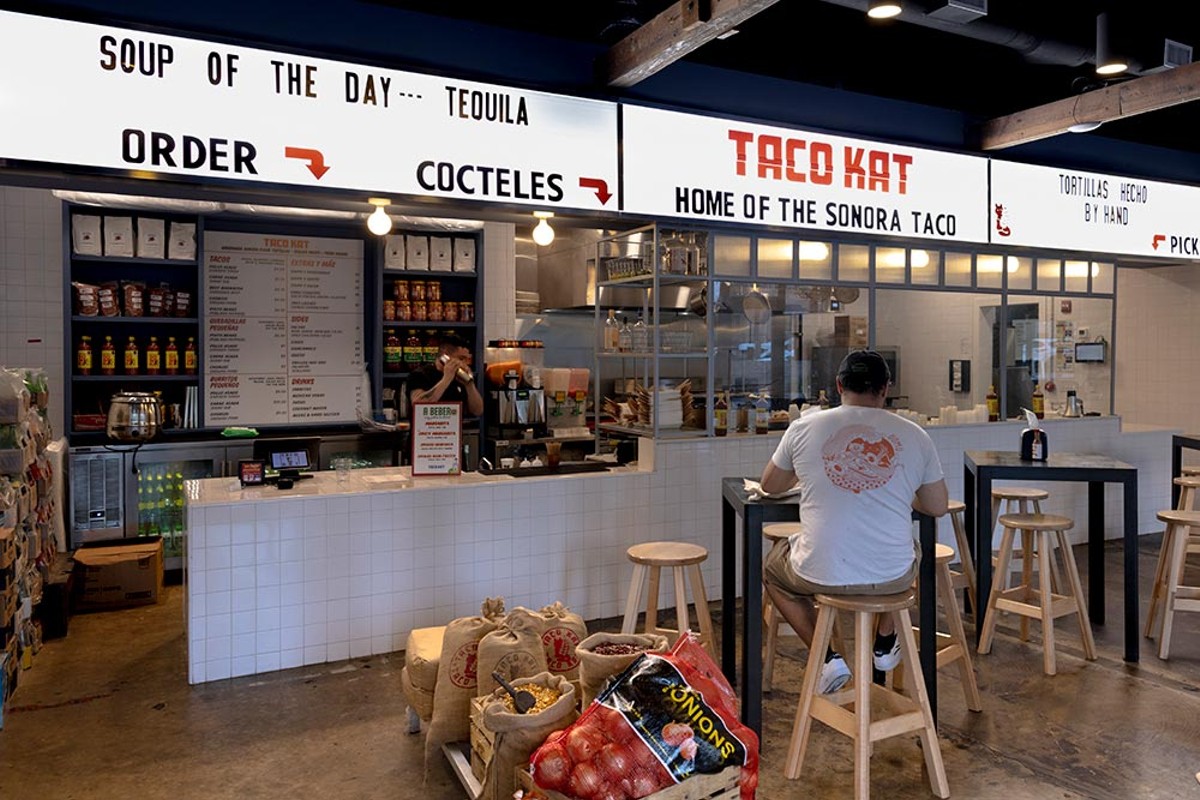 Taquerías navigating the precarious world of the upmarket $5 taco better be equipped to provide a superior product, lest they face hisses and snarls from the very vocal $2 taco crowd.

Luckily for Taco Kat, the new downtown taquería is being met with approving purrs. It's the first taquería in town to specialize solely in Sonoran-style tacos, of which harina, not maíz, tortillas form the base. Under the charge of Team Market Group executive chef Nick Grecco, Taco Kat makes their tortillas in-house using Sonoran wheat flour. The result: tortillas that are thin, browned, chewy and plenty pliable.

Kat's cradles aside, it's the fillings that are Taco Kat's meow, none more so than the barbacoa ($4.75). The chuck eye roll, marinated in guajillo, morita and ancho chilies and rubbed in adobo, may not be slow-roasted in an underground pit — working in a concrete jungle makes that somewhat problematic — but that didn't make the grilled-and-braised shreds of beef any less luscious. The taco is finished off with cabbage, onion, cilantro, avocado salsa and salsa roja — toppings patrons are informed of when placing orders on the touchscreen tablets. We splurged the extra $1.25 to get the chiltepin salsa, a fast-burning condiment made from the berry-like buggers native to Sonora. We scooped a bit of the salsa with fresh-fried chips and tomato-specked guac ($5). Recommend!

But in Sonora, where cattle roam the fields of the northern state, carne asada is, naturally, king. In fact, "carne asada" is also the term used for a gathering where folks partake in quality cuts of unmarinated beef simply grilled over mesquite. Here, Grecco uses a special cut of short rib for his carne asada ($5.25) and cooks it with orange and lime on a hybrid grill laid with the smoky wood.

It's a three-bite banger, but if it's smoky you want, the pollo asado ($4.50) is just that, thanks to chile de arbol. Grecco adds the chili and dry spices to pineapple-marinated chicken thighs before char-grilling and chopping the bits to fashion the model tacos. They're nice to look at, much like the vibrant space itself with its wide marquee, bags of flour, crates of onions, margarita dispensers and other taquería trappings. 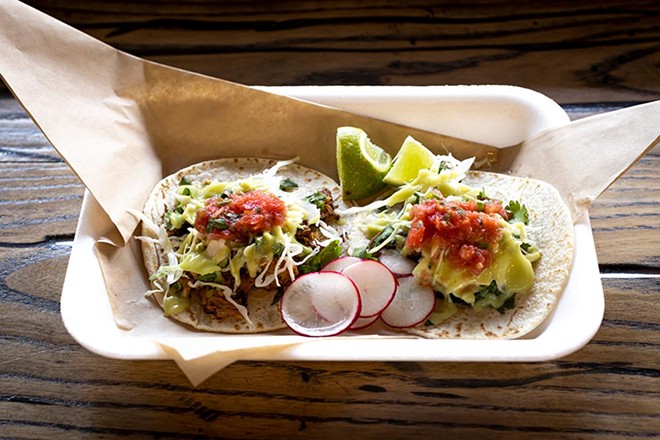 "We wanted to show guests tortillas being warmed and the chopping from the grill, just as they do in L.A. street taquerías," says Grecco. "It gives guests a behind-the-scenes look at the action at all hours of the day and night." Well, most hours. Taco Kat is open until 3 a.m. Tuesdays, Thursdays and weekends, the primary reason being that the taquería is joined at the hip to the "Cool Kats Club" next door. Or more like joined at the vending machine.

Yes, the faux "Kitty Cola" automat is really a portal into a libidinous dimension in the form of a speakeasy tequila lounge (love the wall of Jarritos bottles, BTW), but don't scream it from the rooftops. If you're going to shout, shout about the chorizo tacos ($4.50) — they were arguably our favorite of the lot. You can get that chorizo, or any of the proteins, stuffed inside a burrito ($8.50) or a quesadilla ($7), if you so desire. On the veg front, corn esquites ($6) always measure up, as does the tres leches with a torched meringue designed by TMG pastry chef Amanda McFall. What fell short for us were the beverages — a $9 mangonada didn't compare to, say, the larger $8 fruit gulp offered at Quesa Loco. Same with the $6 watermelon agua fresca served in a coffee-sized recyclable foam cup.

On a positive note, a slew of new menu items will be introduced in the coming weeks — an "El Jefe" burrito with double the proteins and fillings; cheese-pressed tacos with ground beef; house-made taquitos inspired by the ones made famous at Cielito Lindo in L.A.; and nacho plato, like chilaquiles but without the egg.

Oh boy, now I've gone and done it. I let the Kat out of the bag.