Shin Jung Korean Restaurant is Orlando's phoenix, and its literal rise from the ashes has been well worth the wait 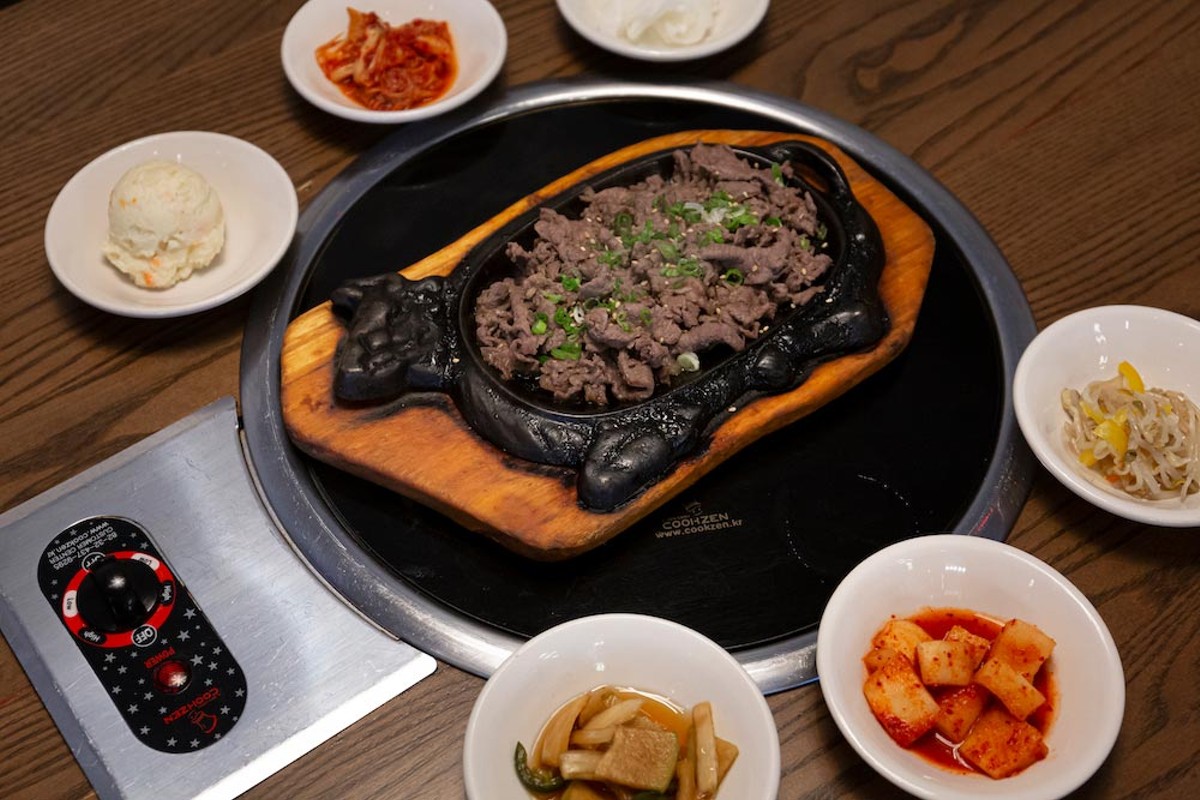 Two years following a fire that rendered the restaurant a "total loss," according to the Orlando Fire Department, mainstay Korean favorite Shin Jung is back in business and better than ever. Orlando Weekly's last review visit to the restaurant still lingers in our archives, but it happened more than 20 years ago, so we felt a visit to the new digs was well overdue.

To illustrate just how joyful the city is to see Shin Jung's return, we visited on a Thursday night — usually a moderately slow night for restaurants — and the place was so packed they were turning away parties of four or more. My companion and I were only two, so we got the only remaining barbecue table left, in the back of the restaurant near the server's station. Not a great spot, but it gave us a panoramic view of the striking redesign.

Prior to the fire, Shin Jung's interior was akin to the Pizza Hut dining rooms of the 1990s: dim lighting, dark walls, hazy clouds of smoke wafting from the BBQ tables. The new Shin Jung is nothing like this. The bright white walls lift the entire room, making it appear much larger than its square footage. Screens on the wall play BTS and other K-pop vids on loop, adding to the cheerful vibe. Industrial shelving above the front window is lined with colorful bottles of plum wine and cute knickknacks. Modern wooden booths replace the dated maroon banquettes of the old space. Modern fixtures fill the space with bright, lively light.

Another improvement is an outdoor patio on the west side of the building, where you can enjoy both fresh air and KBBQ, minus the inlaid table grill — your bulgogi will come just cooked from the kitchen.

We started with a saucy, spicy bowl of tteokbokki ($15), which my dining companion described as Korean gnocchi. It's an apt comparison — the thick rice cakes are pillowy with a pleasing chew like a good Italian dumpling. Tofu skins and bits of crispy pork throughout the vibrant sauce are infused with gochujang, the Korean chili paste.

We also chose the Shin Jung sampler ($15), a plate of the house's best dumplings served with sweet chili sauce and spicy soy sauce. The plate featured six vegetarian dumplings with cabbage and carrots, six pork dumplings with an intoxicating gingery aroma, and six addictive nori-wrapped seaweed rolls, battered and fried with glass noodles in the center.

My only complaint about the BBQ experience at Shin Jung is that a minimum of two people at each table must order barbecue plates to cook at the table. This isn't the case at other Korean BBQ restaurants, and I wish Shin Jung would lift that silly restriction. I'd love to be able to order the japchae or kimchi jjigae or dolsot bibimbap while my partner cooks his own meat. Alas.

Unfortunately, since there were only two of us and the BBQ experience is the thing to do at Shin Jung, we opted for the two items for which they're most famous: kalbi beef short ribs ($32) and beef bulgogi ($25). Both options come with the wonderful rotating selection of unlimited banchan dishes. On this visit we enjoyed cabbage and radish kimchi, paper-thin slices of pickled daikon, mashed potato, bean sprouts and pickled chayote, all of which we devoured almost immediately, forcing a second round to appear within minutes of the first.

My hubs and I are KBBQ experts, but first-timers should ask for a quick primer before turning on the grill. If you aren't normally comfortable in front of a stove, the idea of cooking your own meat at a restaurant with limited tools can be daunting. Regardless, it's fun, it forces real human interaction, and it requires diners to set their phones down for a hot minute and be present with what they're doing. A blessing and a luxury these days.

It's a mystery how the chefs at Shin Jung slice the kalbi — generally a very tough cut of meat that requires hours of braising to tenderize — to be so tender with just a few minutes on the grill, but that expertise is what you pay for. The beef bulgogi was also excellent, perfectly umami and sweet and salty all at once. I like to move my pieces to the center of the grill, the hottest heat, for a nice char right before enveloping it in my lettuce leaf and sticky rice.

All the food came out at once, so you can imagine how many dishes were on our table at the same time. While our server was kind and fairly attentive, the restaurant was packed, so getting her attention was a challenge at times. At one point, we helped ourselves to a stack of napkins when we couldn't make eye contact with her. (Sitting next to the server's station can have its benefits.)

When she did come by, she failed to clear the empty plates until we asked. Even when we were done with our entrees, the plate of raw meat juices and bones from the kalbi remained on the table — right through dessert. Who wants to enjoy a delightful dessert of hotteok ($9), sweet dessert pancakes filled with nuts and caramel, next to a plate of raw meat juices? Not I. Not you. Not anyone.

The dirty plates notwithstanding, we're so happy this restaurant, a fixture in Mills 50 since its opening in 1993, has reopened and is receiving such love. With chilly nights on the horizon, a cup of ginger peach tea and a bubbling bowl of kimchi stew will be exactly what I'll want to warm me up. I'm thrilled the new, fresh, lively Shin Jung will be there again to take my order.