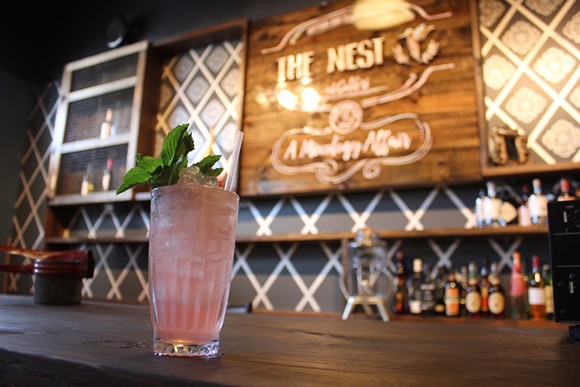 Baldwin Park's main street is upping its restaurant game with new dining options coming soon for every meal of the day. When doors open at all seven new storefronts, you'll be able to order everything from a latte with a picture of your face printed in the foam to a craft cocktail in a Prohibition-style bar all on New Broad Street.

In an area that's been plagued with empty storefronts since the recession, Baldwin Park's Village Center is finally nearly at full capacity, according to commercial property manager Tim Hohman, who manages leases in the Village Center for Tabani Group.

And that direction is leading to an abundance of new dining options. The first of those to open will be The Nest, a Prohibition-style cocktail bar owned and operated by the same family that owns Colibri Mexican Cuisine next door. General manager Ricky Galicia says the bar will open at 6 p.m. Tuesday, May 2, well in time to prepare for Friday's Cinco de Mayo crush. 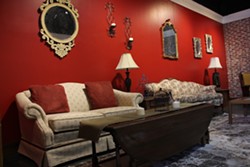 photo by Sarah Wilson
Interior of the Nest in Baldwin Park
Mismatched antique furniture fills the open-concept bar, giving those in search of a handcrafted cocktail a comfortable place to “nest” during late nights in Baldwin Park.

“We wanted to get away from the restaurant side of things and really focus on and bring in a cocktail community here to Baldwin Park,” Galicia says.

“If you really want to get away from all the craziness in downtown but still have a good time,” Galicia says, “this is perfect.”

Another late-night option is in the works: a microbrewery, to open in the old CaddyShanks location. Tactical Brewing Co. owner Doug Meyer confirms that a lease has been signed and permitting is underway. No opening date is set, but they're shooting (sorry) for late fall.

To help you recover from your late night out the next morning, Tutto Caffe is bringing Baldwin Parkers a new way to caffeinate. And if the idea of sipping coffee alone isn't enough to wake you up, what about the idea of your latte talking to you?

Tutto Caffe owner Tony Firth says his Italian-style café will be complete with a special “ripple maker” that can print any message or image you'd like onto the foam of your latte.

“You could propose to someone with the coffee if you want to,” he says.

In addition to lattes offering life-changing propositions, Firth says Tutto Caffe will also feature lunch and dessert offerings including paninis, salads and a fully stocked freezer of gelato. Firth says the cafe should be open by the end of May.

June will bring a new lunch option to the table, when Meza, a Mediterranean grill, is set to open on Jake Street in the Village Center. Meza is the brainchild of Nazih Sebaali, owner of Cafe Annie in downtown Orlando (which was open for 29 years until it closed at the end of 2016). According to sample menus on its website, Meza will also serve dinner and Sunday brunch.

For a mid-afternoon snack, also set to open this summer, you'll be able to pop into Pipcoa, a gourmet popcorn shop on New Broad Street.

Things get juicy when you start dreaming about dinner. Manny's Original Chophouse, a Florida-born franchise of family-friendly steakhouses, is moving into the large, lakefront location last occupied by Lago, which closed in 2012. But carnivores have a while to wait, with Hohman estimating that it could take until October or November for Manny's to open its doors.

Rolling into dessert, frozen yogurt is out and rolled ice cream is in. I-CE-NY Original Smashed and Rolled Ice Cream is moving into the old Yogen Früz location on New Broad Street. The liquid-turned-solid, smashed-and-then-rolled frozen treat will be brought to Baldwin Park by a chain started in New York that's branching out across the country.

Baldwin Parker Ana Leon says she's glad most of the new restaurants moving into her neighborhood aren't attached to a national brand.

“I'm happy about the mix of restaurants that are coming,” Leon says. “I think it's a good mix that will balance off what we already have.”

“Ideally my husband and I would love to just eat here most of the time and never have to leave.”

If New Broad Street, which already boasts a Subway and Five Guys, were taken over by chain restaurants, she says, it would lose its quaint community feel.

Leon says she is a bit disappointed that the majority of new businesses coming to Baldwin are all focused on food. More shops and boutiques would be next on her wishlist to bring New Broad Street up to full capacity.