Remix: a fresh take on a classic American drink

This month, a root-beer float for grownups 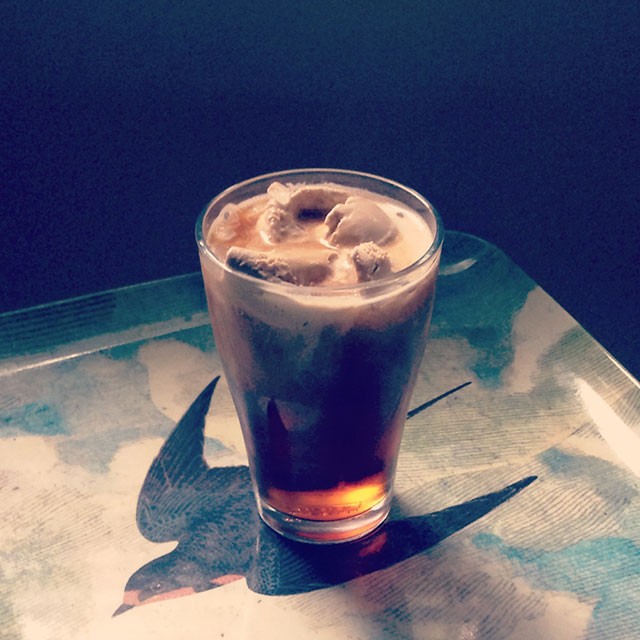 One of my favorite memories of a Midwestern childhood is of the nights when, instead of having dinner at the table, we would drive to the A&W hot dog stand and eat dinner in the car. In our beat-up navy-blue Datsun, windows rolled down, the three of us would sit in the humid, pink-skied Illinois dusk; a creek trickled behind the A&W, audible but not visible from inside the car. The carhop would hook a rubber-coated aluminum tray to the window, weighed down with heavy glass mugs full of root beer, condensation dripping down the sides. (Also: cheese dogs and viciously salty french fries.) In my memory, the root beer tasted roundly sweet, like cane sugar soda does – possibly this was before everyone put corn syrup in everything, although, as good citizens of Big Corn Nation, we would never have complained about a little corn syrup.

It wasn’t that long ago, and yet it seems like some kind of bygone-era stuff, a carhop bringing actual frosty (glass! not styrofoam!) mugs to our car and then coming back to see if we needed anything else and to collect the dishes – just like a regular waitress. Along with carhops and car-bound family meals, having a root beer float at dinner seems like an equally bygone-era idea – rich and sweet and heavy yet utterly wholesome, like putting a slice of cheddar cheese on your apple pie. (Non-Midwesterners: Don’t knock it until you’ve tried it.)

All of this is a pretty lengthy preamble to this month’s cocktail – and thanks, if you’ve stuck around this long – and maybe it’s a justification for Remixing a nonalcoholic drink instead of a classic cocktail. But I’ve been enjoying a liqueur called Root, made by a small Philadelphia company called Art in the Age, for about a year now, mostly straight as a wintertime sip. Art in the Age is nostalgic for an even earlier era than the one I’m remembering – their small line of spirits re-creates tonics and remedies from the 17th and 18th centuries. Root is emphatically not a sweety-sweet drink, but rather a throwback to the Colonial-era medicinal tonic called “root tea,” made with birch bark, sassafras, sarsaparilla and various herbs. Its flavor, a complex spicy/herbal blend, somewhat resembles an Italian amaro (like Averna, Nonino or Fernet Branca). But the heat of summer made me wonder if Root could be forced into a more traditional root-beer role, and I really love the drink I came up with. Even with the addition of the soda and ice cream, it’s still not a sweety-sweet drink, but instead a potent-yet-mellow balance of sweet and bitter, creamy and fizzy.

If you haven’t tried aged rum yet, Brugal 1888 is a great place to start: dry, oaky and whisky-like. For the cream soda, look for a natural or smaller-batch brand; the mass-market stuff can have a nasty metallic tang. And for the ice cream, traditionalists may choose vanilla, but I find that coffee Häagen-Dazs melds nicely with the rum and bitter Fernet.

The colder the root beer, the better the float, so help things along with some crushed ice and be sure the soda and the glass are well-chilled. Place a bit of ice in the bottom of the glass, fill three-quarters of the way with root beer, and drop in the ice cream. It will foam; make sure it doesn’t overflow. Serve with straw and spoon.

Place a bit of crushed ice in the bottom of the glass. Measure in the Root and rum, then fill the glass three-quarters of the way with cream soda. Stir gently with a bar spoon. Drop in the ice cream, making sure the mixture doesn’t overflow, then drizzle a spoonful of Fernet over the ice cream. Serve with straw and spoon.