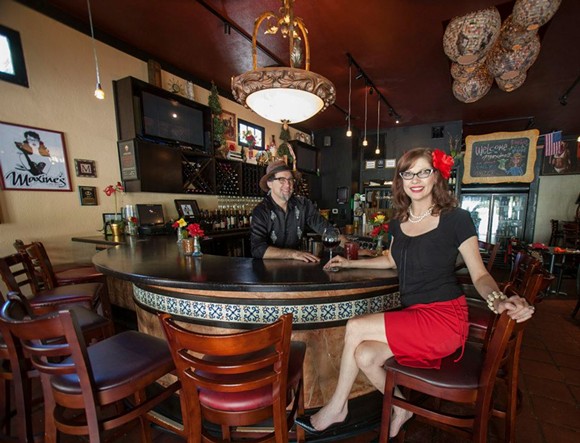 Photo courtesy Maxine's on Shine via Facebook
We may be seeing many more restaurants getting into the cocktail craze thanks to a recent revision in Florida's state legislation.

A tweak in the language of Chapter 561.20 of the 2016 Florida Statutes (and the subsequent Rule 61A-3.0141) could mean big changes for small and mid-sized restaurants looking to acquire a special liquor license, or "SRX" license.

Prior to the change, restaurants needed to:

Now in order to obtain the special license, restaurants need to:
The new law does away with specifications for the number of tables and chairs, the need to serve "full course meals" (salad or vegetable, entrée, beverage, and bread) and for outside areas to be contiguous to the building.

May seem like semantics, but Kirt Earhart, who operates Maxine's on Shine with wife Maxine, calls the amendment a "game changer" for many mom and pop outfits.

The pair even considered moving Maxine's to the much larger Graffiti Junktion space in Thornton Park before catching wind of the new legislation.

Within days, they had filed their application to the State for the special liquor license, which comes at a cost of $1,820 per year—nowhere near the cost of obtaining a "Quota" liquor license which are so limited in number that most restaurateurs resort to purchasing them from other restaurateurs, often for hundreds of thousands of dollars.

Still, Earhart would rather see the state do away with the square-footage requirement and open things up to even smaller restaurants.

Perhaps most telling is the section from House of Representatives bill analysis titled "Fiscal Impact on State Government"  which reads:


"The Economic Impact Statement projects an increase in sales tax and licensing revenue for the DPBR (Department of Business and Professional Regulation)."