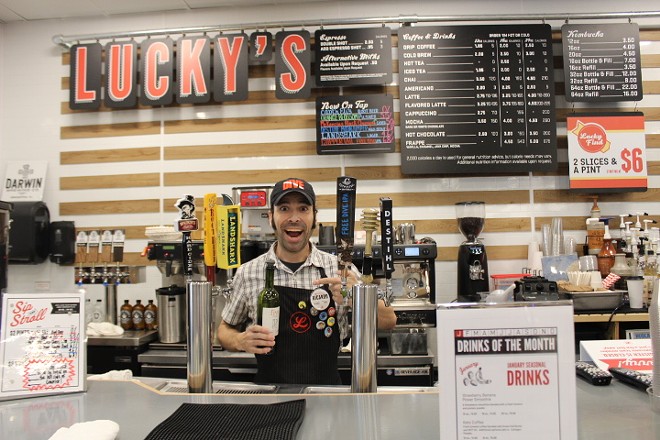 Photo by Lawrence Griffin
Ricardo Correa, manning the Lucky's Market cafe on Tuesday afternoon
Update, Jan. 23 | Lucky’s Market announced the stores that will close are holding going-out-of-business sales over the next three weeks. "Deep discounts on in-store merchandise during that time will allow customers to stock up on some of their favorite Lucky’s products before they are sold out."

Shoppers on Tuesday learned the sad news that Lucky’s Market is closing most of its Florida stores next month, after opening in Central Florida less than four years ago. Only one store, the Melbourne location, will stay open after Feb. 12.

Progressive Grocer reports that as many as 32 of the 39 Lucky's markets nationwide will close, and plans for a new Denver location of the Colorado-based grocery chain have been shelved. The closures are apparently the result of parent company the Kroger Co. divesting its interest in Lucky's in December.

At the Lucky’s Market location on University Boulevard in Winter Park, people milled about at the aisles and perused the fresh food options to eat in-store. Many were thinking about the impending closure by parent company Kroger’s.

At the beer aisles, browsing the domestic options, Oviedo resident Clifton Mason, who said he liked the Lucky’s brand, put it bluntly:

Others didn’t even know the closures were happening until Orlando Weekly broke the news, like one woman, Dani Gould of Winter Park, who was shopping with her son Isaiah. Both of them appeared genuinely disappointed by the news.

“I didn’t know that,” she said of the closures. “I don’t like that. This is my favorite store. I can get all the organic and natural food at a reasonable price. My daughter is an athlete, a professional swimmer. I buy her vitamins and honey and other things here.” 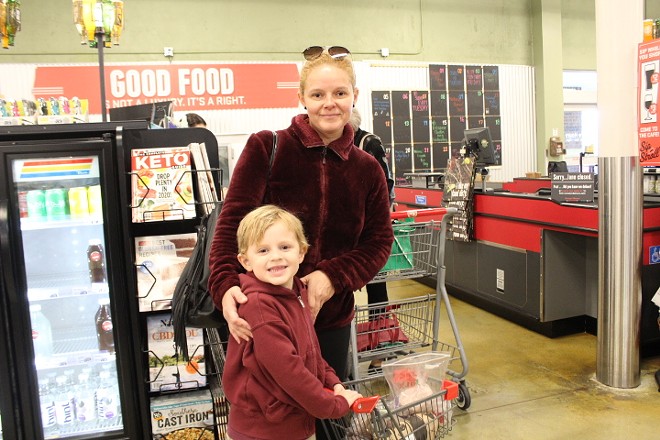 Photo by Lawrence Griffin
Winter Park resident Dani Gould and her son Isaiah
Another shopper, Volusia County resident Ann Marie Sweeney, said she’d never been to Lucky’s before and was sad that it was closing.

“I think it’s amazing,” she said of her first trip thus far to the store.

At the café, a group of friends sat and enjoyed midday beers. They wouldn’t give their names, but said they had enjoyed coming in for lunch often. One woman said Lucky’s had been the only place she could coax her husband to come shopping, due to the "sip and stroll" policy with beer from the café.

Another man, who identified himself only as Daniel, said that although he went to several different stores to shop, Lucky’s had been his most frequent haunt. He said now he supposed he would have to go back to rotating between other stores.

“It’s upsetting,” he said. “They had the best deals. I can go to Aldi’s, but where else am I going to get $2 beers? I guess I’ll check around. Probably back to Publix, and Aldi’s, and I’ll stock up on cheap stuff here.”

Daniel said the proximity of Lucky’s to his gym in the same area was also convenient.

“I have a manager who bought a house recently. What’s he gonna do? Another dude relocated his whole family to work here.”

The man behind the cafe counter was Ricardo Correa, who said he had worked at the Salvation Army up until Lucky’s opened, and decided to take the chance, believing it was the place for him to be.

He said he wasn’t worried about himself. “Luckily, I live at home. I’m a millennial. I was born in ‘82. That’s the reason why my generation lives at home – the cost of living is insane.”

But he did feel for his co-workers.

“I lament for the other workers who don’t have a network to catch them, like family or friends,” he said. “I have a manager who bought a house recently. What’s he gonna do? Another dude relocated his whole family to work here.”

He said finding Lucky’s left him feeling like he had been handed a life raft after several underwhelming jobs, one of which he left on bad terms.

“This place opened and I was like ‘All right, you gotta take this,’” he said. “I walked in wearing a tie from Salvation Army, and they said ‘lose the tie.’”

Photo by Lawrence Griffin
Lucky's Market in Winter Park
Stay on top of Orlando news and views. Sign up for our weekly Headlines newsletter.