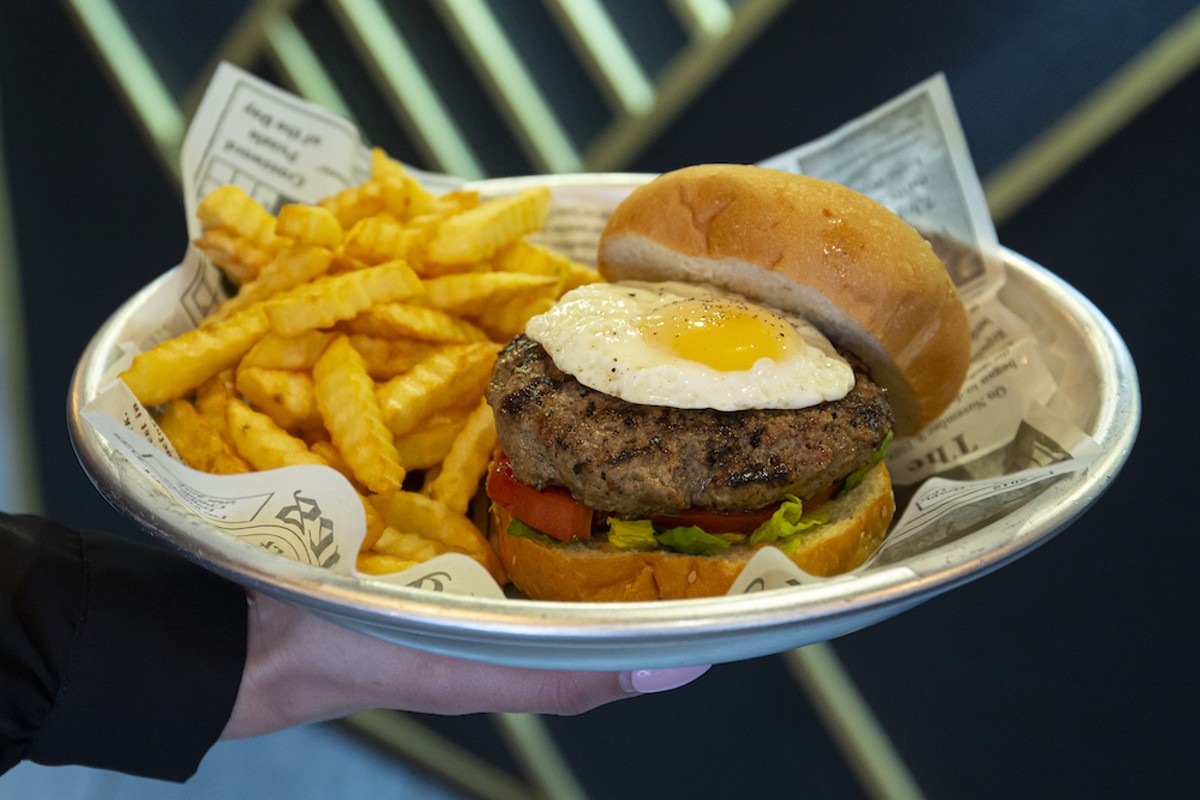 Friends of mine have been making the trip down to Kosher Grill on International Drive on a semi-regular basis for one sole purpose: to indulge in their falafel. Knowing my appetite for the chickpea fritters, said friends encouraged me to join them one fine Sunday after the sabbath to scarf down a few of these tasty buggers, along with other items from Kosher Grill's menu of Israeli fare. Not surprisingly, the casual, laid-back restaurant attracts Jewish patrons from all across the globe (even Miami!), so it's not often you'll see a table full of goyim at Kosher Grill.

But there we were, wide-eyed and waggy-tongued, gawking at freshly fried falafel nested into a plate of hummus slicked with olive oil, dusted with paprika and flecked with parsley ($12.95). After scooping a bit of hummus onto a crispy ball, I took a bite and looked inside the fried wonder. Now, it's not often I get to describe a digestible as "green and creamy," and certainly rarely in a good way, but that's precisely what the innards of the falafel were.

The hue, in case you're wondering, is the result of a liberal use of parsley, and possibly cilantro, but the falafel certainly lives up to the hype in every way. While I'm still partial to Maraya Restaurant's fava-and-chickpea numbers, you won't see me passing on Kosher Grill's falafel. Or their hummus, for that matter. Really, everything we sampled from the menu of pretense-free eats was done with aplomb, and while I'm sure the spaghetti Bolognese ($19.95) and teriyaki stir-fry ($19.95) are all fine and well (apart from those tourist prices, oy!), we gravitated toward the restaurant's Levantine dishes.

Ay-yay-yay! This makluba I can't get enough of, I found myself saying in my inner Sid Dithers voice. The rice dish ($19.95) isn't served in the form of an upside-down cake, as is traditional, but the blend of perfectly cooked grains, caramelized onions, mushrooms and bits of chicken schnitzel added textural variation, while the sweet chili-garlic-pesto sauce lent the dish a luscious mouthfeel. Arayes ($24.95) are house-made pita stuffed with kefta kebab — grilled, seasoned beef patties — which are then cut into quarters, served with French fries and a tahini dip. Really nice. Three of us felt serving the pockets with a house-made hot sauce — a fiery zhug, perhaps — would make a real difference; one felt it was fine as is. Those kefta kebabs ($23.95) can be had with two sides — try the purple cabbage and bracing Israeli salad for a carb-free nosh.

If there was a dish I wasn't overly crazy about, it was the kibbeh ($9.95). While the beef filling was nicely spiced, the croquette's casing was just too thick, more suited to a jalapeño popper than a delicate kibbeh. But it didn't seem to bother the scores of patrons any — it's a popular starter, this.

As far as endings go, desserts here are all dairy-free in accordance with Judaic jurisprudence. In fact, the restaurant has been given the stamp of approval from the Rabbinate of Central and North Florida so, yeah, they take the "Kosher" in Kosher Grill very seriously. Now, there'll be those who happen by the restaurant and hesitate to enter, thinking the place may be a bit too "Jewish" for them. To you benighted souls, I say this: Keep walking. Kosher Grill is no place to have a dinner for schmucks.