What TR Fire Grill does really well: hire interior designers. The restaurant looks like what I dream my midcentury farmhouse-themed home will look like someday. The decor is nothing if not eclectic: atomic curios mixing seamlessly with multicolored enamel cookware hung over earthy reclaimed-wood paneling. It's all quite homey. But if I hadn't been visiting the restaurant to review it, most of the uninventive and mediocre-hinging-on-subpar food would have been long forgotten by now.

More about that later. 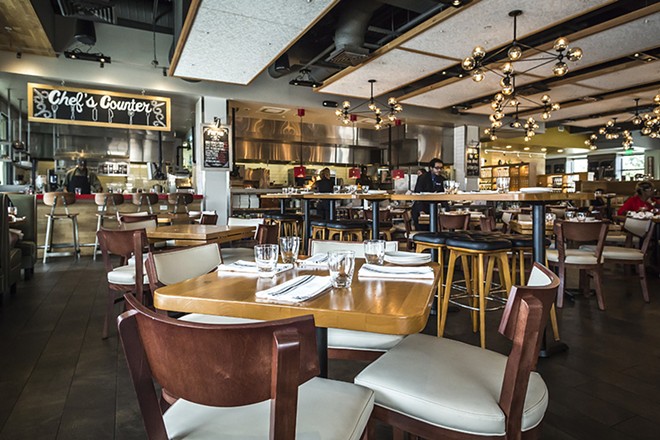 My reservation had somehow been lost in the fray when we arrived, but the hostess assured me she could "switch some things around" and we were seated promptly. Only moments went by before our server appeared to take a drink order. We opted for the pressed sangria for two, which was priced the same for two servings as one craft cocktail. Often, restaurants use their cheapest vintage for the sangria, but TR Fire Grill's version (served inexplicably, but quaintly, in a tiny French press) was smooth and well-balanced with the essence of blueberries, pineapple and strawberries.

To start, the prime rib egg rolls ($11) seemed promising. The description promised creamy and piquant Wisconsin cheddar and savory caramelized onions wrapped in the fried shell, plus a horseradish aioli to top off the classic combo, but upon first bite, the only flavor discernible was the fryer oil. Bummer. What wasn't disappointing was the oven-baked pizza dip ($12), served with toast points. Consider the brilliance of the fillings of a meat-lover's calzone, plus red sauce, layered in a cast-iron skillet and then broiled until impossibly melty and creamy. We finished that one.

A good meatloaf is hard to find, and harder still to find at TR Fire Grill. The bacon-wrapped smoked meatloaf ($16), accompanied by lifeless mashed potatoes and browned broccolini, was straight-up burned on the bacon side. It was only salvaged by removing the thing that's supposed to make everything better and scooping out the innards. The flavor of the unsinged part was excellent, so there's promise in the recipe, just not in the execution.

The salmon and "zoodles" ($22) was impossible to pass up, as the low-carb, paleo dish is an obvious trend play. The salmon itself, supposedly the star of the plate, might as well have not existed and I would have enjoyed the dish just as much. The zoodles, a zucchini "noodle" made with a tool known as a spiralizer, were addictive and al dente (for real!), tossed with a zippy feta sauce and studded with tiny, tart Sweety Drop peppers. I would have happily eaten just the bowl of zoodles, had they been offered sans fish.

If you opt for dessert, just order one for the table, and make it the Chocolate Mayhem (small, $10; large, $17). That moniker explains what's happening on the plate perfectly, because it's the kind of dessert you'll crave if you go through a bad breakup – just throw all the chocolate stuff in the house on a plate and dig in. This Mayhem starts with a faux chocolate lava cake (faux because the lava is on top, not inside) and then is topped with copious chocolate whipped cream and two enormous scoops of chocolate-based ice cream, then some chocolate-covered espresso beans and slices of an entire Snickers bar are plunked down around the plate. And I'm just describing the "small" size. After that ill-conceived behemoth, the other dessert options, including the halfway-decent griddled lemon pound cake with blueberry compote ($8), seem like they're not even trying.

Overall, service is prompt (too prompt, maybe, since we were brought the check before we expressed our desire for dessert), but it's the funky-fresh decor that provides the talking points, since the merits of the food alone won't carry a convo.

The only way to really describe the unforgettably forgettable experience of dining at TR Fire Grill is this – the place feels like a chain, but it's not. At least not yet. It's the only location so far of a "concept" by Romacorp., the Orlando-based owner of the Tony Roma's rib chain, and a Waikiki Beach location is opening soon, according to the website. If the plan was to create an easily replicable restaurant that will appeal to the masses in order to join the likes of Firebirds, Grand Lux Café and, yes, Tony Roma's, it's a win. If not, meh.