Here's all the new food for this year's Florida State Fair, ranked by how weird it is 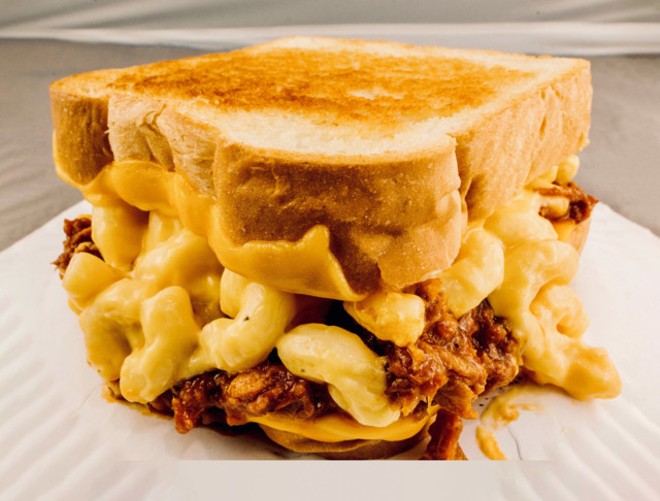 Photo via Florida State Fair
A most anticipated lineup has arrived, and it’s looking pretty bold.

It’s the Florida State Fair’s 2021 food list and it’s both bold and audacious — bodacious, if you will.

This list may have you daydreaming, saving up or drooling. Or, if you’re like me, getting inspired to start Weight Watchers. But in honor of this new lineup of culinary achievement, we’ve ranked the Florida State Fair’s new slate of food options from most basic to most bodacious. Bon appetit.

Deep-fried rainbow cookie: A rainbow cookie is one of my favorite holiday treats from my friend’s Italian mother. It’s almond-y and chocolatey and a little fruity and now, thanks to Paul’s Concessions, it’s deep-fried, covered with powdered sugar and served on a stick.

Deep fried molten lava cake: The classic yet sometimes overplayed molten lava cake. It was part of the cause of Jon Favreau’s mental breakdown in the movie Chef and now it's been given new deep-fried life by Carousel Foods.

Blue raspberry lemonade pineapple: Cinnamon Saloon comes through with the only refreshing option — frozen blue-raspberry lemonade in a fresh hollowed out pineapple. Could definitely benefit from a rum floater though (not telling you to sneak it in).

Candy pop sundae: Candy as in your choice of candy bar. Pop as in candy-infused popcorn. Sundae as scoops of ice cream with caramel and chocolate sauce. At this point, we are actively pissing off our teeth.

Gelato nachos: Yeah, you heard that right. Gelato nachos (and tacos). Get to the Funky Flamingo for this brilliant creation. Dutch stroopwafels replace the tortilla chips or shells, and there’s a bunch of gelato flavors to choose from.

The PigRig: One of only three of the new options that is strictly savory, made by the folks at Low N Slow. It’s a grilled cheese stuffed with BBQ pork and mac and cheese then finished with even more barbecue sauce. I’d wait a bit before getting on Gravitron after eating this one.

Loaded tater burger: Another strictly savory beast, this one new from Carousel Foods, is a hamburger with shredded toasted cheese, cottage fries and bacon, finished with ranch dressing and chives. You pick your lettuce, tomato, pickle, and onion combinations.

Dill pickle pizza: Either you love pickles or you’re a fucking weirdo. This is on the top of my list to try because I, like many people, already love the pickle pizza from Ybor City’s Mangia Bene Pizzeria Corp. This one, from Angela’s Pizza, has a white garlic sauce base, topped with mozzarella cheese and dill pickles. Ranch dressing and dill seasoning are added after it’s cooked. Anyone game for a taste test?

Flaming Hot Cheetos funnel cake: Best Around wants to help you with your social media thirst by offering a sweet, savory and spicy monstrosity that'll drive much attention to your feed. Cornmeal, spices, jalapeños, and flaming hot Cheetos are added to the cake mix before it’s fried then topped with nacho cheese and more Cheetos. I might have to pass on this indigestion fest.

Tickets for the Florida State Fair are currently on sale, with a disclaimer that by purchasing a ticket you agree to follow the fair’s COVID-19 protocols. Some of those protocols include a mask requirement when not eating or drinking, increased hand sanitizer stations and social distancing.