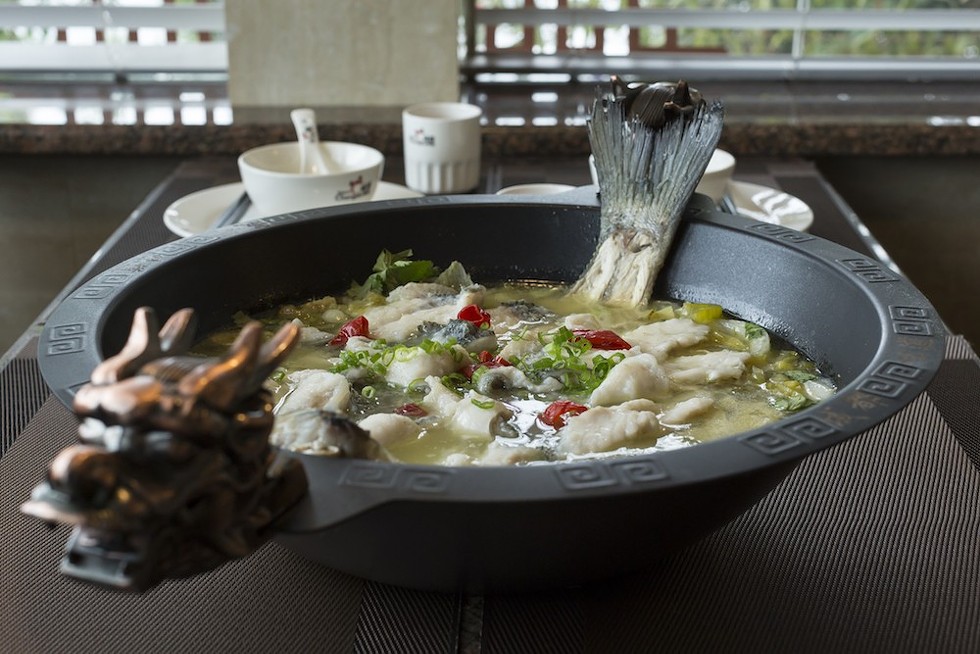 Photo by Rob Bartlett
A second location of Taste of Chengdu will sock Baldwin Park with a peppercorn punch in March.

Unlike those teases at the Salty Donut (just open here already!), Shaka Donuts has committed to Orlando, and SoDoughers are diving into their made-to-order hot cake doughnuts. They've even got a doughnut named after the mayor – Buddy Dyer's Nutty Buddy. See? Commitment.

The Dallas-based, wine country-inspired restaurant is making significant changes to the 8,000-square-foot space that once housed Kona Grill on the southern end of Lakeside Crossing. Of note: the exhibition kitchen with charcuterie bar, and an enclosed greenhouse patio offering a "wine garden experience." The menu of NoCal-influenced dishes (local and seasonal, of course) come ready to pair with the 60-plus wines on tap.

The old Great Southern Box Company building on the southeast corner of Princeton Street and North Orange Blossom Trail is being preserved and repurposed into a 22,400-square-foot food hall featuring an elevated plaza with outdoor green space (read: shade). The food hall is but one component of a larger plan to redevelop the corner site in the Packing District, which will also see a microbrewery and a signature restaurant/bar.

Part of the Mission: Space expansion, this ambitiously themed restaurant promises to be, well, far out. The dining room places guests inside a space station with panoramic views 220 miles above our little blue planet. The menu is a little more down to earth: modern American cuisine with a 1,000-bottle wine list.

A small-town deli and ice cream shop inside the Veranda in historic Thornton Park seems like a perfectly apropos concept, doesn't it? It's even named after Frank Sperry, who served as mayor of Orlando from 1914 to 1916. Boar's Head sandwiches and Hershey's Ice Cream will offer a taste of Americana.

The space, buried deep inside the Shops on Park, is a tough one, but chef Sajan Prem will wow the Park Avenue set just as he does tourists at Tabla's Universal-area original. Prem and chef Ashish Suji are closely guarding the menu at the Winter Park location, coyly saying it's a "secret," but expect "a symphony of Indian, Chinese and Thai flavors."

One of the city's best and most buzzworthy restaurants is about to sock Baldwin Park with a peppercorn punch. When chef Xiong "Tiger" Tang's second shrine to all things Sichuan opens in the old Chi Pan Asian space, senses along New Broad Street will be piqued by the tongue-numbing, gut-burning pleasures.

The stoner burger chain returns to the Sunshine State after more than 50 years, but Orlandoans will have to make the drive to the O-Town West development near Disney to satisfy their munchies. The 4,500-square-foot restaurant will be the company's largest burger, umm, joint.

Soaring salvers of seafood will greet guests at this Phillips Crossing concept by Yummy House owner John Zhao. The restaurant is modeled after Fishman Lobster Clubhouse, the famed Toronto seafood house known for its towering platters of lobster and crab that’s been featured on shows from Ugly Delicious to Huang's World. Hong Kong-style dim sum and modern Cantonese cuisine will also be served.

– This story appears in the Jan. 29, 2020, print issue of Orlando Weekly. Find out the latest dining news every Friday morning with our weekly Food + Drink newsletter.