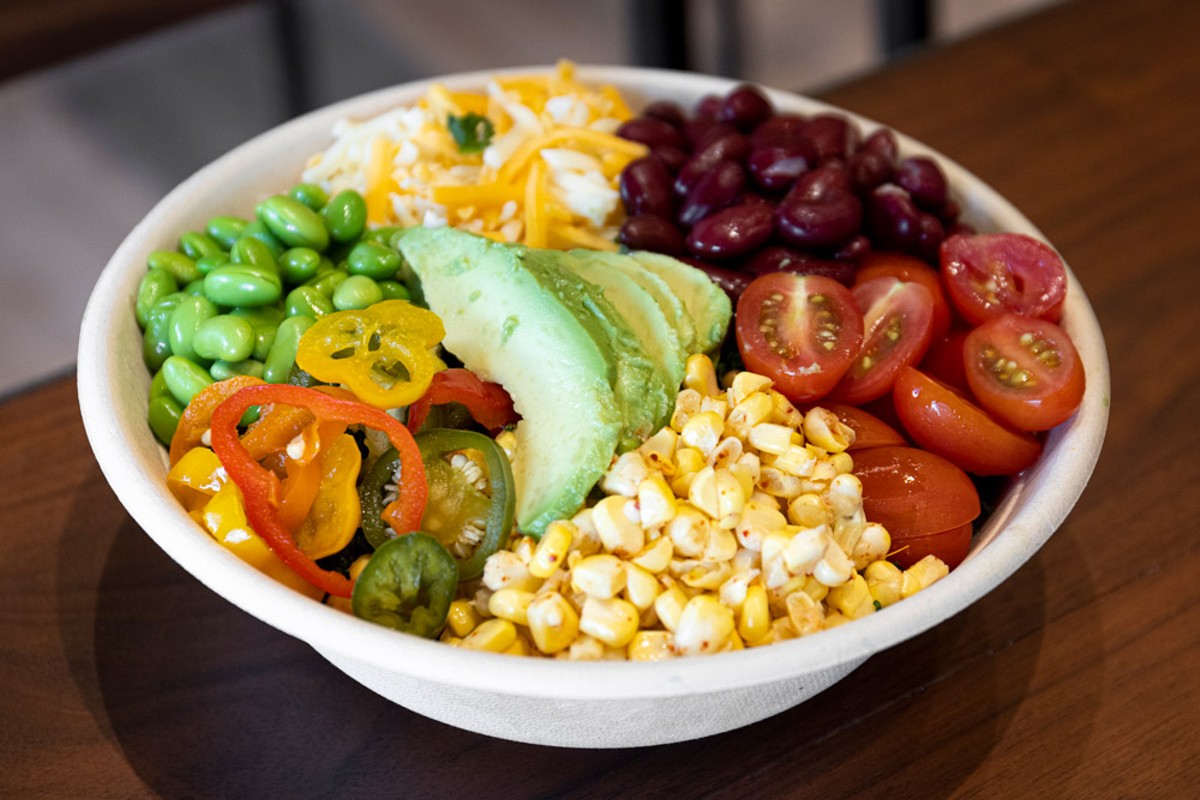 It's bright, it's green and its lines are as crisp and clean as the mountain air. No doubt Fresh&Co, the Manhattan import touting hyperlocal seasonal fruits and veggies, looks every bit the picture of salubrious living it purports to be.

"Smells like Indian food in here," I say to the pal.

Being sandwiched between Madras Café and Saffron Indian Cuisine in a strip mall setting, no matter how upmarket the veneer, will do that, I suppose. I don't know if the Fresh&Co brass or its real estate brokers took that into account prior to taking over the space. Really, it's no biggie — if anything, it has us craving a tandoori chicken rice bowl. Sadly, that isn't one of their "grain bowl" options. Again, no big deal: The menu offers plenty of other seemingly worthy replacements playing up the flavors of the Mediterranean, Southwest and the Middle East with top-notch ingredients. But for all Fresh&Co's boasts about local sourcing, there aren't any specifics about the purveyors on the menu.

"I think the meats and produce are sourced locally," says an uncertain worker tending the salad bar.

"Do you know from which farms?" I ask, scanning the menu.

Hmm, OK. It appears they're taking a preparation-over-provenance approach. The assemblages do look pretty, and perhaps stresses on the supply chain have forced them to work with what they have.

At least, that's what I tell myself while tearing into a smoked turkey and cheddar panini melt ($10). The avocado, tomato and chipotle spread on rosemary focaccia has all the requisite components of a proper-good sandwich ... all 790 calories of it. Yes, Fresh&Co lists calorie counts next to its menu items, if you care for that sort of thing. (I don't.)

The Shanghai chicken salad ($12.95), a less fatty option than the sandwich, goes a bit heavy on the creamy miso vinaigrette. It does have nice chunks of roasted chicken breasts in it, though, as well as almonds, cilantro, edamame, romaine and red cabbage. Not sure why it has to be named the "Shanghai" chicken salad, but, then again, these are the same folks who were called out for their casually racist Miso Lucky Bowl four years ago, resulting in the item being pulled from the menu.

There's that waft of Indian food again. It's a shame they don't offer a tandoori chicken or salmon bowl, but we tailor a "market table" bowl as close to it as possible with wild rice and blackened chicken thighs ($14). Roasted carrots and charred broccoli are our two sides of choice with the bowl. The rice, carrots and broccoli are great, but that chicken? More lackin' than blackened. The cubes have the faint, indistinct essence of some indeterminate seasoning, but blackened? Hardly. The side of mac & cheese ($5) has more flavor.

We do enjoy our $10 smoothies — the "berrylicious" and the tropical "hangover" full of blended fresh fruit. Then we make the mistake of checking the refrigerated display case on our way out.

"There's mold on that fruit," says my pal, pointing to a plastic container of honeydew melon. I pick up another container and notice the same thing. We hand the containers over to one of the employees, who takes a look at the mold spotting and apologizes to us.

"Don't worry about it," I say as we head for the exit. Then it hits us — that same spice-laden scent as when we entered.

"You thinking what I'm thinking?" asks the pal.