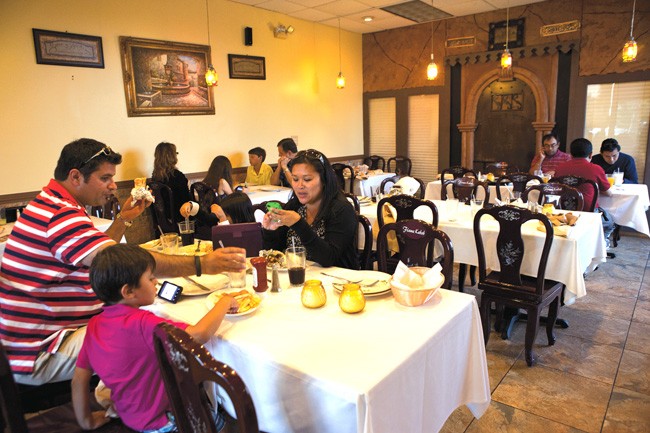 It's been called the “Spice Café” and the “Afghan Spice Café,” but for the first time in a decade, this corner space in the Dr. Phillips Marketplace is dropping the “Spice Café” appellation in the hopes of picking up a more loyal clientele.

Flame Kabob, in case the name doesn't give it away, specializes in those meaty, grilled delicacies comprising the staple diet of many a Middle Easterner. In fact, owner Rafat Hamdeh also operates Jerusalem Restaurant in Kissimmee, a place I've visited on numerous occasions and one that always reminds me of how inferior my rice is compared to his. Unless they're stuffed in pitas, kebabs are meant to be enjoyed with rice (never french fries), and Hamdeh's glistening, vermicelli-streaked long-grain rice more than complements the already flavorful kafta kebab ($8 lunch; $15 dinner): It gives meaning to the kebab's existence. Is it possible I'm given to hyperbole? Yes, but I've probably enjoyed Hamdeh's rice and charbroiled ground-beef-and-lamb kebab dozens (yes, dozens) of times, and it's simply a killer meal. You'll get one skewer at lunch, two for dinner, but no matter the time of day, the platter comes with a delightful house salad and pillowy-soft pita with above-grade hummus.

Flame Kabob may not have the cachet of its neighbors Anatolia or Greek Flame Taverna, but as a straight-up kebaberia, it more than holds its own. Moist, never-dry cubes of chicken make the shish tawook ($8 lunch; $15 dinner) a perennial favorite, and the rack of lamb ($28) comes with five wonderfully plump chops atop an inviting bed of that ridiculously good rice. The lamb isn't prepared medium-rare – as a general rule, Middle Easterners prefer their lamb medium to medium-well – but it nevertheless makes a savory impression. On the couscous plate, chicken breasts ($16) take a backseat to the fluffy semolina and its zesty mélange of cabbage, carrots, chickpeas and roasted potato.

Traditional pre-meal offerings of hummus ($6), baba ghanoush ($6), falafel ($6) and the like are all worthy, but less popular starters such as seasoned ground-meat pizza, called safiha ($6), and crunchy fattoush salad ($6) were both boons to hungry stomachs. Even though it was served cold, we devoured the baklava ($2.50) wholeheartedly; the knafeh nabulsia ($6), a filling Palestinian sweet of white nabulsi cheese topped with Shredded Wheat-like strands and drizzled with syrup, wasn't as satisfying an ending.

Service also can be somewhat unsatisfying. On entering, our server simply handed us menus and motioned for us to sit at a table, then was slow to pick up used plates. Surprising behavior, considering all of our lunch visits have been issue-free.

Hamdeh's clientele runs the gamut – you'll see halal-keeping Muslims, tatted-up hipsters and moneyed retirees all dining together. I'm reminded of Larry David's hilariously inflammatory bit in an episode of Curb Your Enthusiasm: He remarks to a friend that the Palestinian eatery in which they're dining would be a fantastic place for Jews who are cheating on their spouses to patronize, because no Jew would ever go there.

I can't attest to that happening here. People entering Flame Kabob thinking it's the entrance to Subway (located next door) and then leaving when they realize their mistake are the only cheaters I've seen here. I just shake my head, disappointed that they've willingly denied themselves a great meal.