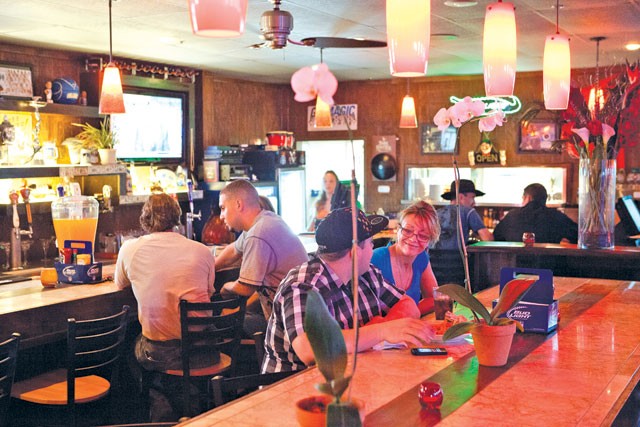 We promptly lowered our collective expectations upon pulling up to the weathered strip plaza fronting the Florida Mall and seeing "WingIt" on the marquee above the entrance of our intended destination. A banner outside proclaiming Exile Restaurant & Lounge's "grand opening" was sufficient signage though, again, not exactly a reassuring indicator. So when we stepped through the doors and took in the sophisticated interior – nothing like what we expected, based on the exterior – it took us aback. If Vern Yip or David Bromstad had had a hand in designing the Orlando Ale House, the resulting space would closely resemble Exile's, or something darn near close to it: orchids, flower arrangements, wine racks and red cloth napkins mixed with Orlando Magic paraphernalia and boob tubes tuned into sports channels are a detour from traditional straight-guy decor toward something a bit more urbane.

The makeover that owners Tim Herman and Joseph Aintabi initiated extends to the menu as well. Sure, wings are still available, but so are other standard bar favorites like pizzas, sandwiches and burgers, in addition to a smattering of Latin and Mediterranean staples. It being a weeknight, we were surprised that no happy hour specials were offered – "It's something the owners are working on" said our server – so we smothered our sorrows with a trio of starters comprising the "Exile Platter" ($8.99): mini corn dogs, a beef empanada and onion rings. While they could've provided more than just one empanada, all the finger foods gave rise to positive comments and some optimism with respect to the dishes to come.

So while the incongruity of gnawing on a dozen chicken wings ($8.99) while the mellow melodies of Etta James, Michael Bublé and Harry Connick Jr. were piped from above wasn't lost on us, it hardly compared to the aberrant coupling of sticky rice and utterly bland, dry chicken kebabs ($11.49), a supposed specialty of the house. Just as incompatible were the spongy crust and heavy piling-on of chicken and artichokes on the gourmet pizza ($11.50), but we all concurred that the bacon cheeseburger ($8.49) satisfied all necessary requirements and, unlike the pizza and kebabs, shouldn't be expelled from Exile's menu.

Desserts also appear to be a work in progress. We were told that the signature chocolate marquise ($4.99) was unavailable but that Aintabi had prepared a special pineapple-coconut cake ($6.49) as the indulgence of the evening. Our server assured us that one slab was enough to feed our table of three, and that it did. The cake was at least a foot high, and as large as it was in stature, it was just as large in flavor – save for the Cool Whip topping.

Throughout the evening, I couldn't help but feel that if Herman and Aintabi rid the restaurant of its sports-bar edge, it might help bring some cohesion – first by aligning the decor with a more sophisticated aesthetic, then by re-steering the direction of the menu. The quirkiness of Buddha heads, bongo drums and basketballs can only do so much to mitigate a disjointed dining experience.