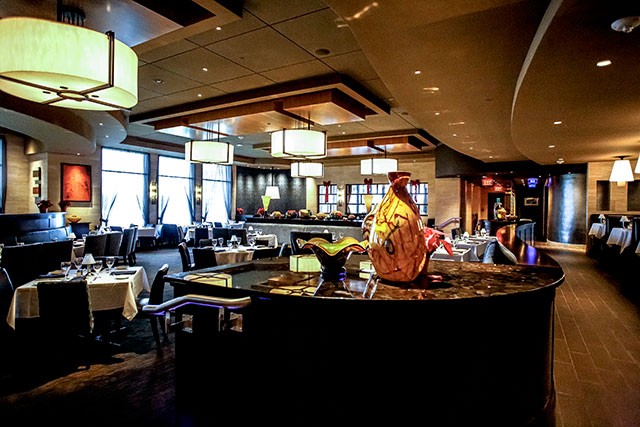 The branding whizzes at Darden couldn’t have picked a more ideal locale to situate Eddie V’s – a fancy fish house catering to the mature, deep-pocketed gent. Where else but on chain-riddled Sand Lake Road in Dr. Phillips can you find such concentrated masses of Abboud- and Bahama-wearing types willing to dole out big bucks for predictably banal fare? That a slew of neighboring seafood joints – Ocean Prime, Moonfish, Roy’s, Bonefish Grill – have capitalized on this demographic is proof enough. Now Eddie V’s is creating a veritable feeding frenzy among paternal pescophiles and their significant others with its fresh, flown-in seafood and throwback vibe. Yes, construction of the restaurant meant razing an upscale chophouse with a throwback vibe, but, for what it’s worth, remnants of Timpano’s Rat Pack swank live on.

The sounds of jazz caught our ears as we were led to our table, then a seemingly able server donning a white jacket and black bow tie swooped in to offer us water of various sorts. As I sat in my ridiculously comfy chair listening to the nightly specials, I detected a timbre of tension in the server’s voice, which soon became nervous and agitated. Ingredients and preparation methods were fumbled and wine appellations were butchered; all of us at the table did our very best to appear relaxed in an effort to put the server at ease. Regrettably, it didn’t seem to work. In fact, service in general lacked the sort of refined finish I’ve experienced at Darden’s other luxury resto-brand, the Capital Grille.

No matter; we were here to sample the seafood, and the citrusy jumbo lump crab ($16) served with avocado slices and a nice remoulade made an exceptional starter. Just as good was the steak and lobster tartare ($17), though the folks at Eddie V might want to consider transposing the word “tartare” to sit next to “steak” (the lobster isn’t raw, just the beef). Yes, rest assured, the Maine lobster is blanched then chilled before being served alongside a wonderful truffled steak tartare topped with shaved Parmesan. For added excitement, the unquestionably fresh lobster elicited a low-level sweet-spicy afterburn.

Given the caliber of the starters, we were truly disappointed by the featured fish of the evening – a $30, sadly plated black grouper served over a “bed” of asparagus. Not only was the meager portion of broiled fish a smidge dry, the promised “bed” amounted to four measly strings of asparagus. Sides are offered a la carte, and we found solace in the crab fried rice ($6), which complemented the grouper nicely.

Every ounce – 22, to be exact – of the USDA Prime bone-in rib eye ($48) tendered bites of sheer beefy lusciousness. It’s about as good a steak you’ll find in the city, and it had better be, given the numerous steakhouses located within a bone’s throw of Eddie V’s. To go with, consider the succotash-like sweet corn ($6) or the lightly charred truffled mac and cheese ($6).

Desserts, like a too-sweet hot bananas Foster butter cake served with butter pecan ice cream ($9) and a Key lime-and-coconut baked Alaska flambé ($9), roused a collective “meh” from the table, a sentiment we held for the restaurant in general. Does Eddie V’s offer anything different than, say, the Oceanaire Seafood Room or Ocean Prime? No. In this place where the old man and the sea converge, there’s nothing particularly novel.