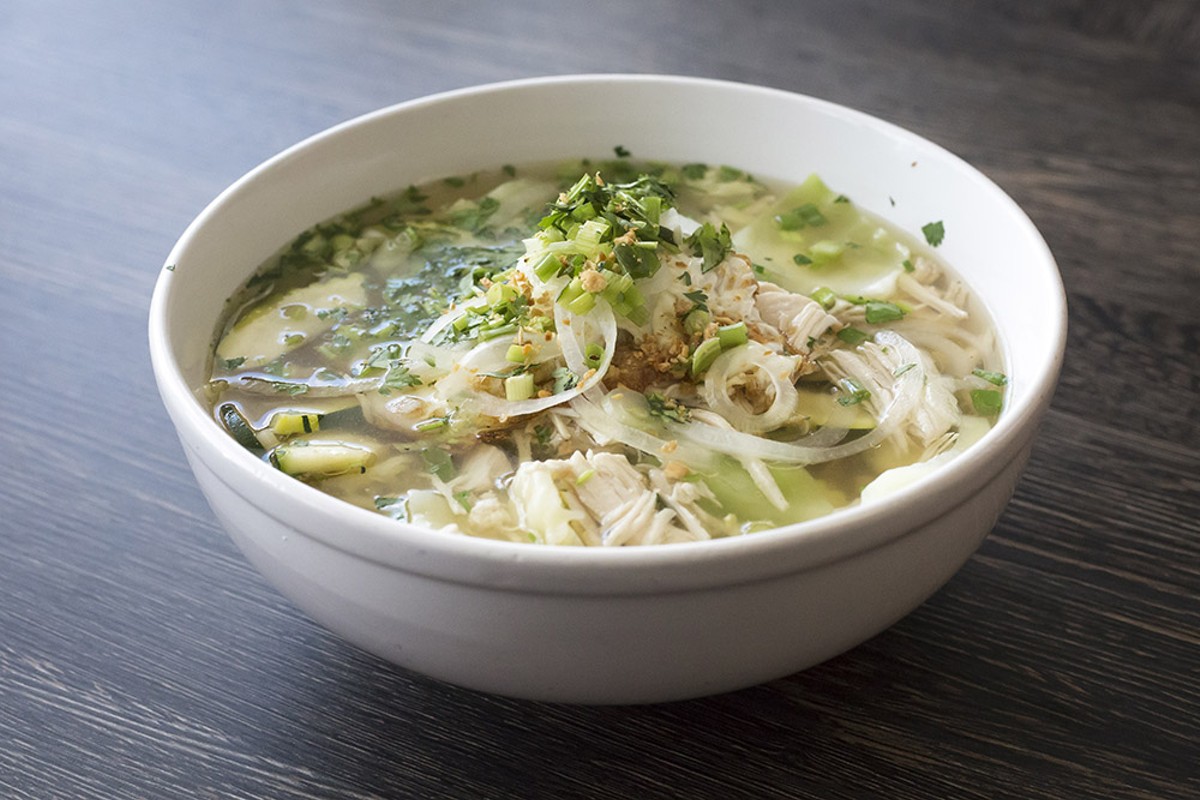 I don't profess to know a bloody thing about Dragon Ball Z – for me, anime begins and ends with Star Blazers – but I do know that for the scores of freaks and geeks who do, Soupa Saiyan has become a sort of destination shrine to the popular Japanese animation and manga franchise. However, they seem more enthralled by each other's prismatic attire and the fit-inducing cartoon (sorry, no offense) being projected on the boob tube than they are by the nourishing noodly eats inside the restaurant's oversized bowls. As we entered, our garments, pedestrian in their dull solid colors, seemed to mock the other patrons' very raison d'etre, and the furtive glances shot our way seemed to marvel that we smug realists deigned to enter their fantastical realm.

Yes, we stuck out like a couple of Smurfs at a Klan rally, and, for a nanosecond, we considered heading to Border Grill (a few doors down) for tacos. But, to use a phrase familiar to Dragonballerz, we sensed and gathered ki upon inhaling a sudden sublime scent wafting in from the open kitchen. It resuscitated us and then, like Namekians of the Dragon Clan, we wielded our Magic Materialization abilities to create an empty table out of thin air. In this small and perpetually packed restaurant, the feat made a significant impression on our fellow diners.

Newcomers though we were, strangers to noodle bowls we are not. Patrons here can build their own by choosing a broth (veg, chicken, beef), noodle (rice, egg, udon) and protein, but a signature bowl of Korean Fire Noodles ($11), touted as the world's "third spiciest," caught our eye (not literally; that would hurt). The brothless ramen stained our chopsticks red, but the ingredients – chicken (because they'd run out of barbecued pork), fried egg and a pretty mess of vegetables (corn, carrots, mushrooms, cabbage) – doused the fire we desired. But an add-on of seared foie ($15) made it richer, and the fact I'm craving a bowl as I write this must count for something.

We went meatless for bowl No. 2 with a make-it-yourself mashup of udon noodles in veggie broth ($9.50). It was a perfectly salty consommé of sorts, humming with the umami of fried tofu and teeming with a delightful crunch of vegetables – carrots, cukes, broccoli, cabbage and zucchini. Meatballs went missing from our takeout order of pho dac biet ($11), an odd hiccup, but it's not like they skimped on the flank, tendon and medium-rare steak. (Suggestion: Add some Thai hots or serranos to the mix.)

Fried quail ($7), its dermis darkened from a secret blend of spices, broke the noodle monotony. We detected five-spice powder and some brown sugar perhaps, only the birds weren't as juicy as we like them. Our server's claim that "You're gonna love the marinade!" wasn't entirely incorrect, however.

With so many of the Dragon Ball Z references lost on us, we felt a bit guilty occupying a table – especially given the patiently waiting throngs dressed like they just got back from Comic-Con. So one last swig from a can of mango and lychee juice, a quick dodge of a couple staring into their smartphones, and out we went into the Pokémon-infested city.