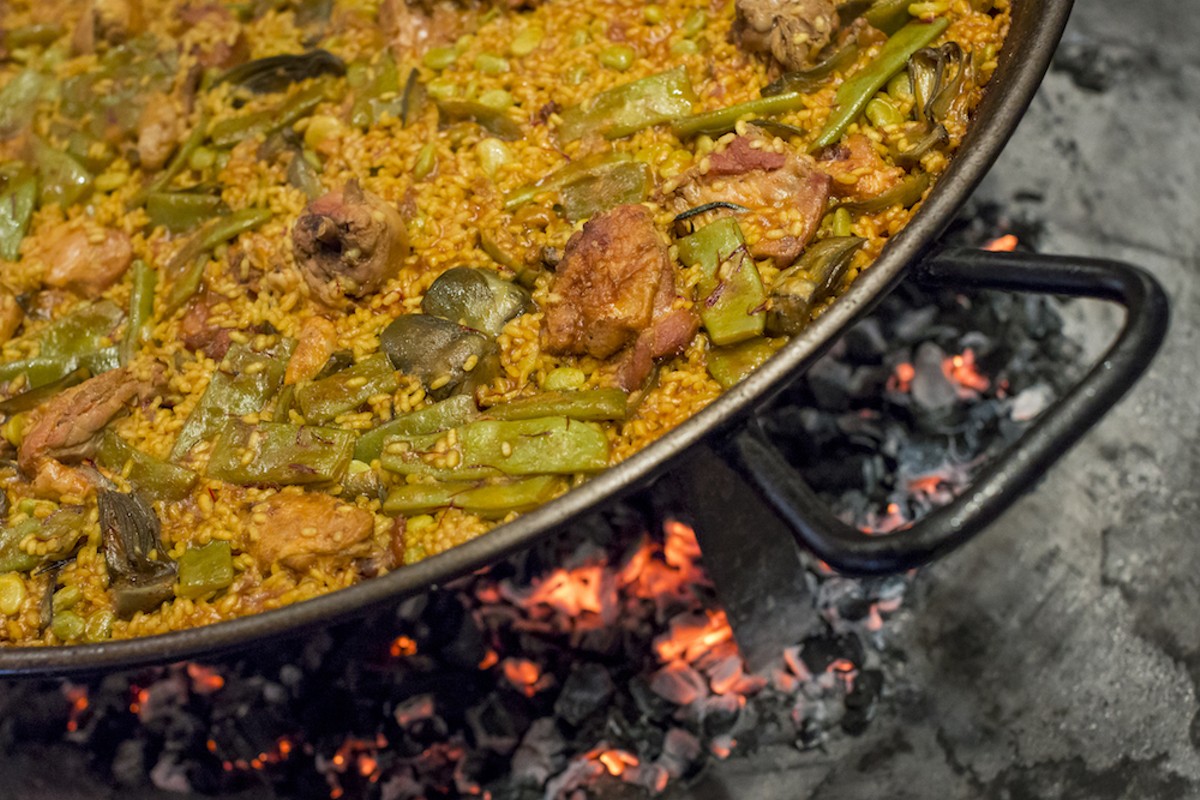 José Andrés' dream wall is dissimilar in every imaginable way from the dream wall of his orange-skinned archnemesis. For one, the outspoken chef/humanitarian actually has a wall and, further, I doubt you'll ever see "a Spanish restaurant at Disney" scrawled onto Trump's unbuilt border barrier. Andrés jotted those words down 25 years ago as a visualization technique after noting the lack of Spanish cuisine at Walt Disney World. The fact that Jaleo by José Andrés stands today is a testament to the practice of mental rehearsal, but also to being in the right place at the right time, and to Disney Springs' unrelenting efforts to transform itself into a culinary theme park of the highest order. Not only was snagging Jaleo, whose D.C. outpost was a 2019 James Beard Foundation Award finalist for Outstanding Restaurant, a bit of a coup, but the restaurant is, arguably, the centerpiece of Disney Springs.

I mean, just look at it – it's a 22,000-square-foot, copper-topped giant artichoke capable of seating more than 750 people. "There are no cubic forms, no opaque walls, no straight lines," says Juli Capella of Capella Garcia Arquitectura, the firm behind the restaurant's design. "Here reigns a plant-like organic structure with its dynamic forms. An avant-garde, expressionist and welcoming architecture." And the fare – a tribute to "the spirit and flavors of Spain" – appears to complement that aesthetic: bold and colorful without being flamboyant.

Sure, waiters carting around gorgeous gams of pata negra ($36) for tableside carvings is a bit much, and while I felt placing chicken croquetas ($12) on a ceramic Cinderella cushion was eye-rollingly Disney, others I dined with thought it fun. But the kitchen, headed by chef Rodolfo Guzman (who once laid tiles during construction of the D.C. Jaleo), sets whimsy aside in favor of serious takes on Spanish cuisine. "Who would've thought a Bolivian would cook Spanish food better than me!" Andrés boasted of his young chef when Jaleo first opened. Seriously.

In addition to the tableside carving of ham, you'd do well to indulge in Guzman's Josper-grilled whole sea bass ($46) and the rossejat negra ($20) – a shrimp and squid paella toasted black with squid ink. Order a couple of pata negra "tacos" filled with Ossetra caviar ($18), knock back a gin and tonic ($16), finish with the classic flan ($10) and you and your dining compadre will walk away deeply satisfied.

Or you can maximize your spend and delve deep into the menu with either the Jaleo Experience ($70) or Jose's Way ($110) chef's tasting. Both get you about 13 courses, the latter being a little more substantial with some off-menu items: rousing salmon tartare inside a pastry cone with salmon roe; an incredible octopus salad laced with salsa roja and crunched with baby cauliflower; fried baby squid with dollops of squid ink; a salad of sautéed spinach, apples, pine nuts and raisins glistened with sherry and praline butter; and on it goes.

I can't recall enjoying a better gazpacho, nor a more supremely tender grilled "secreto" – the strip of meat found near the belly of an acorn-fed, black-hoofed Ibérico pig. An anchovy- and piquillo-stuffed Gordal olive served alongside a molecularized "liquid" olive pays homage to Andrés' mentor Ferran Adrià (of El Bulli fame). You'll also get plenty of jamon, as well as tomato-brushed pan de cristal (the ethereal "glass bread" from Barcelona). The juiciest acorn-fed pork sausage might follow, then gin-and-tonic Rappahannock oysters and an escalivada of roasted red peppers, eggplant and sweet onions in a sherry dressing after that. From the wood-fired paella pit, a signature rice dish, like the umami-rich chicken and mushroom paella served to us on one visit, will leave you feeling like a fattened Ibérico pig, though a pig that can likely muster up space to devour olive oil ice cream with grapefruit.

When a dish missed the mark – a gin-and-tonic oyster seemed to have been heavily (and inexplicably) salted on one occasion – it was duly replaced. On that same visit, a sea bass meant for a nearby table was inadvertently brought to us. The runner said it was a part of our Jose's Way tasting, but after hearing the couple grouse about waiting for their sea bass, we asked our server about it. "Let's just say it was your bonus dish," came the sheepish reply. Contrite managers, servers and runners rushed to appease the fishless pair and, in the end, they left happy. And appreciated.

It just demonstrates how a customer-first approach can turn a frown the other way around. For Jaleo, which translates to "uproar" and "commotion," that's much ado about something.