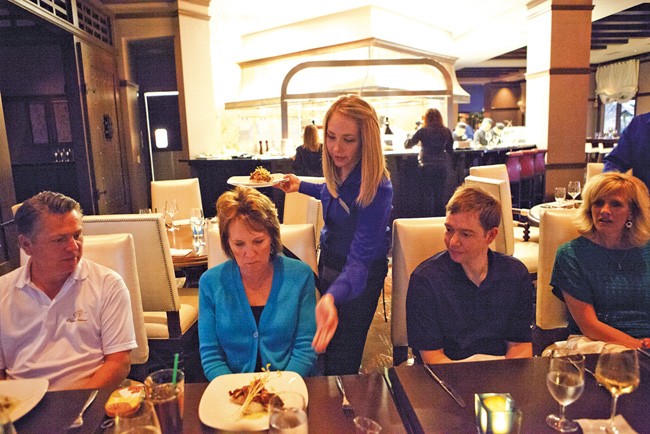 Getting to the Deep Blu Seafood Grille requires navigating the breadths and depths of Disney property, followed by a glide through the handsome Wyndham Resort lobby in the newish Bonnet Creek quadrant of Mickey's Kingdom before one is submerged in the restaurant's swish, and peculiarly placid, environs. Tiresome? Yes, but it helps foster an appreciation for chef Cory York and his fastidious commitment to not only wading through the tourist hordes to get to work every day (he lives in Longwood), but combing the oceans' depths to bring diners the very best the sea has to offer.

The self-described “pescophile” found his love for seafood in Hawaii, during a stint grilling steaks at Roy Yamaguchi's defunct Koa House Grill. A $40 purchase of a 50-pound tuna from the back of a truck set in motion a celebrated career that's included posts as executive chef at the Oceanaire Seafood Room in Charlotte, N.C., and the Nantucket Seafood Grill in Greenville, S.C.

One look at Deep Blu's menu and the focus on rigorous sustainability and local sourcing becomes evident, but where York really makes a splash is with a dish sourced from the waters off the Philippines. His astounding crab cake ($15), a mound formed from 98 to 99 percent crab meat and baked on a cast-iron skillet, had us looking up Philippine emigration policies on our smartphones. Muttering things like “My stomach is so happy right now,” we considered, ever so briefly, just settling the bill and heading home - but diving into the menu was the order of the evening, and after recommendations were made by our personable, informed and intelligent waitress, the kitchen's competencies were prominently displayed. An elegant plating of delicate, meaty seared scallops ($29) over dried tomato-and-basil-cream linguini looked sublimely simple, but York's addition of smoky Tasso ham exposed his Mississippi upbringing. From local waters, we chose the wahoo ($28), one of the fastest fish of the deep, and ordered it grilled along with a tomato-garlic pan jus. Its mild, meaty flavor drew comparisons to swordfish (it's not quite as dense), but we couldn't help notice the slab was a tad overdone and the flesh a smidge dry. That said, there was no denying its freshness - in fact, the restaurant guarantees a line-to-plate time of no more than 36 hours.

A limited, albeit impressive, selection of Niman Ranch “1855” Prime Angus steaks warrants their hefty prices, so I had no qualms plunking down $45 on a 22-ounce T-bone that satisfied my red-meat craving, and then some. A peppercorn-brandy sauce (served separately) wasn't meddling in the least, and the hot-house organic tomatoes in the vegetable medley practically melted in my mouth. For a side, the generous plate of grilled asparagus ($9) splashed with truffle oil, lemon and sea salt was wonderful.

A $10 meringue-topped Key lime tart cued the descent off our collective highs - a little more of that graham cracker and macadamia nut crust would've sustained it. A dessert sampler ($14) of chocolate truffle cake, fresh berries and cream, and Key lime pie is ideal for sharing, but none of the endings reeled us in.