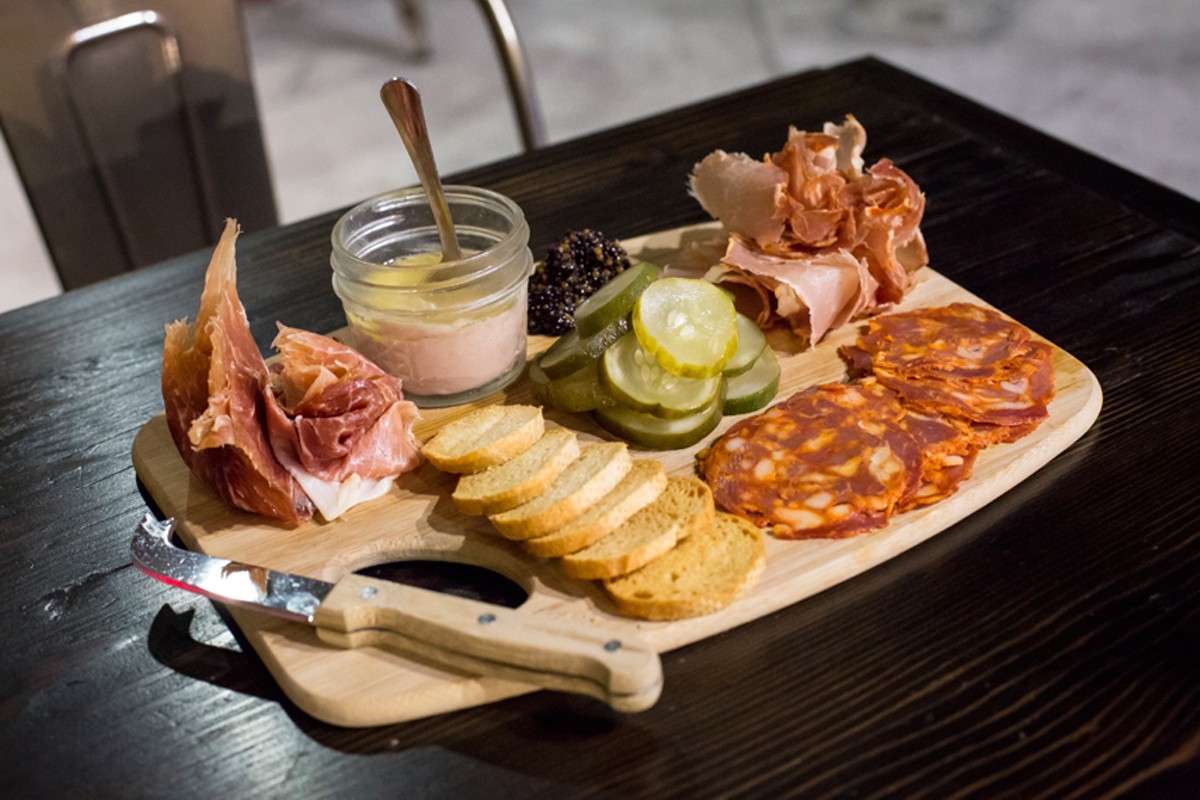 When word came that Taverna Opa owners Katerina and Vassilis Coumbaros were going to open a Spanish restaurant in the I-Drive 360 complex, the name, according to a press release, was to be Toca Boca ("touch the mouth" in Spanish).

But "Toca Boca," as it turned out, was a name used by an international gaming company, which just so happened to be owned by the Bonnier Group (whose offices take up a good chunk of real estate in Winter Park Village). So the husband-and-wife duo opted to change the name to Tora Bora – excuse me – Tapa Toro and, insofar as a name can reap dividends for a restaurant, the gamble appears to have paid off. There's certainly no doubt as to the eye-candy appeal of this 5,000-square-foot space.

For those seated at the 12-seat paella bar, a glance into the main dining room might seem like peering into a dark forest and seeing the luminescent glow of deer eyes. The dimly lit space necessitates launching one's flashlight app in order to read menu descriptions in small font, but when the words come into focus, it's a feast for the eyes.

Seeing was believing when spectacular pulpo ($15) poached in herbs and wine, marinated in paprika and garlic, and expertly charred on a plancha, was placed before us, then duly devoured. In a further nod to the Galician preparation, red potatoes (as well as grapes) were served alongside the octopus.

Really, apart from limp and soggy (and very garlicky) roasted cauliflower ($9), everything we sampled – from vinegary gazpacho ($6) with croutons of Galician barra, to arugula-topped pan rustico with a spread of Medjool dates, goat cheese and preserved lemon curd ($12) – was a "terrifying and edible beauty," to hijack a phrase from Salvador Dalí. If you'll forgive the hyperbole, the same went for plush and lovely tenderloins of beef grotesquely impaled on skewers.

But what of the paella? The 40-minute prep time quoted by all the servers is often much shorter, making it well worth ordering. Our server, also given to hyperbole, declared the chicken, chorizo and lamb chop paella ($42) "changed my life," and if it weren't for the lack of crusty socarrat, it might have changed ours. Still, this was some utterly brilliant paella, and it reheated well the following day (and the day after that).

While our server was delightful, service needs work. One of the guests in our party was never presented a menu, and on two occasions, servers brought other people's dishes to our table. Given the smallish size of the water glasses, they should just leave a bottle of Florida's finest on every table rather than run the risk of leaving them unfilled (which was often). I should also state that nearly a half-hour passed before we got our desserts, so it's good thing there were plenty of distractions – namely, the gyrating flamenco dancers – to make the wait bearable. Speaking of dessert, there wasn't a bad thing to say about the chocolate sponge cake ($13) or the flan ($9) other than the price. On the libationary front, the lack of Spanish beers and sherries was disappointing.

As we left the packed restaurant, a selfish part of me thought what a pity it was that decent food like this was being wasted on all these bloody tourists. But as much as we locals might want vacationers to be left with the short end of the stick, we need independent outfits like Tapa Toro representing the city's culinary interests to the outside world. Unlike other restaurants in the area, Tapa Toro doesn't dish out a load of bull.