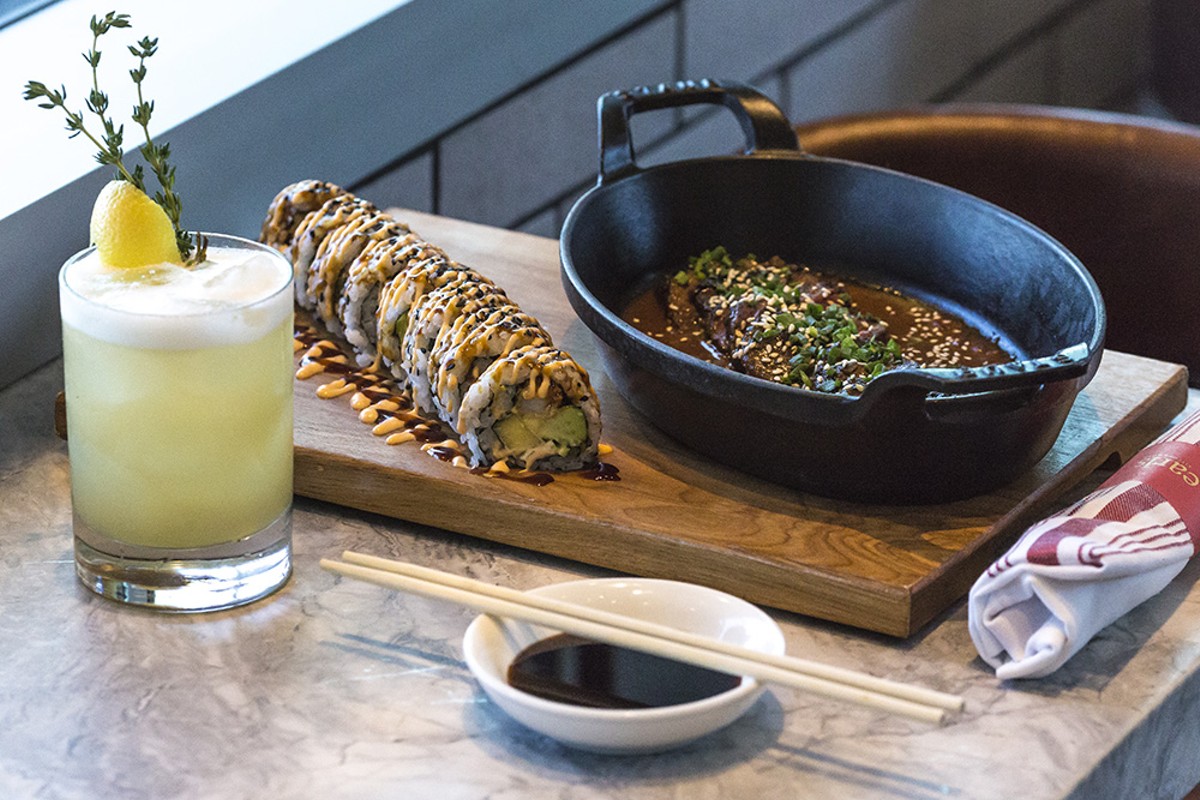 No longer a homogenous food wasteland like, oh, I don't know, Indianapolis or Oklahoma City, our fair hamlet is nevertheless still a draw for chain restaurants – even seemingly sophisticated ones like Earls Kitchen + Bar. But this import from across the 49th Parallel isn't your grandfather's corporate resto. Far from it, in fact; their mission to "unchain the chain" indeed comes to fruition in the enormous Millenia space once home to Blue Martini.

Earls is a looker. It's got verve and style and wears modern art pieces by Thrush Holmes, Lyle Owerko, Pascal Vochelet and Andrew Spear very, very well. And (unlike some of the well-meaning, though utterly green, servers) it's not just a pretty face. As at any worthy chain restaurant, the food quality at Earls, under the auspices of executive chef Simon Zanotto, has been consistent from visit to visit – an impressive feat, given the way the menu darts across the map in a sort of global greatest hits tour. But we enjoyed a plate of succulent "dry" ribs ($20 half; $27 full) just as much as a bowl of tuna poke ($10) tossed in a spicy lime dressing with mango, avocado and macadamias and served with some mighty good togarashi-dusted wonton chips. On another visit, we laid into perfectly serviceable bibimbap ($12) as well as a vibrant $16 kale salad, its buoyant frills slicked in brown butter vinaigrette and bearing baby potatoes, roasted Brussels sprouts, cranberries and toasted almonds. For those looking to start things off semplicemente, there's a big block of Italian pan bread ($2.50) for the taking (and shredding and dipping).

Yes, culinary pluralism thrives at Earls, so named for the restaurant's Ohio-born founder, Leroy Earl Fuller, who opened cafés in Montana before moving the family to Canada in the 1950s to launch his restaurant empire. That said, you're not going to find any Canuck staples on the menu (c'est dommage, poutine junkies), though hefty burgers, like the brioche-bound "Bronx Burger" ($14.75) stuffed with onion rings, aged white cheddar and red pepper relish, are served with crispy fries cut from Yukon Gold potatoes. (They were developed in Ontario, if you didn't know.) Oh, there's a gewürztraminer from British Columbia, too – it's even offered by the glass in 6- and 9-ounce pours – which we quite enjoyed with juicy Cajun chicken ($20) blackened in proper Prudhommian fashion. The charred breasts are served with a well-balanced slaw and potato salad, though I would've preferred a lemon beurre blanc sauce rather than garlic butter.

Now, a famished Pampas-trotting gaucho might not find Earls' chimichurri steak ($25) particularly gratifying, but the sliced Black Angus skirt marinated in a smoky poblano chimichurri along with tamarind, cumin, garlic and coriander, is quite filling for the rest of us, muchas gracias. And it looks cute served in a cast-iron skillet with arugula, roasted tomatoes and baby potatoes. If you're so inclined, enjoy dessert, like the signature sticky toffee pudding ($8) – ask for extra toffee sauce – or a dense pumpkin pie ($6) with Chantilly cream (a seasonal creation), along with a digestif in the way-cool modernist cocktail lounge. It embodies the sort of throwback aesthetic I want in my home, so no surprise it's one of my favorite dining spaces in the city to enjoy a bite, a drink and an unchained melody.