Thanksgiving is a holiday made from scratch 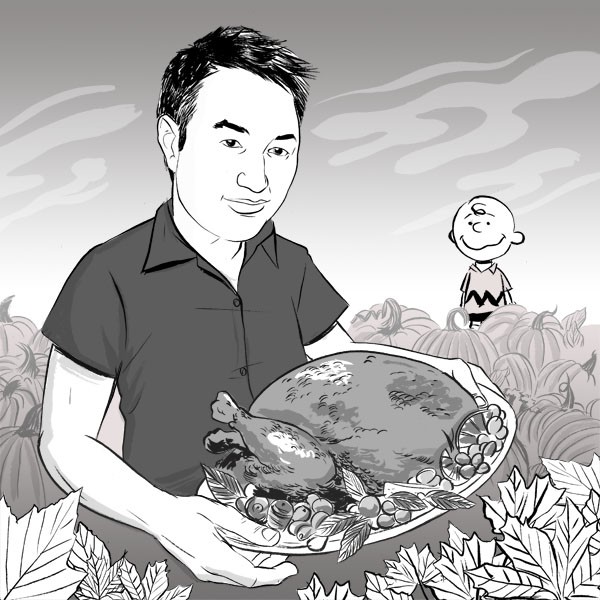 Like any food-obsessed type, my favorite holiday is Thanksgiving. Hell, probably my favorite day is Thanksgiving. It always kicks off a long weekend, it’s secular, it’s not a blatant reminder that you’re a year closer to death and you don’t have to spend any money on pointless gifts. It’s all gluttony, sloth, that Charlie Brown special and football. A really good day off, distilled. True, the occasion sorta marks the beginning of the end for the original inhabitants of this country, but Koreans had nothing to do with that part. Just sayin’.

Transcending the mere sybaritic facets of the occasion, however, is the pleasure of cooking for your loved ones. And we’re not talking about your everyday, fix-your-significant-other-a-sandwich-type stuff. This is some serious shit. Because it’s annual,  there’s pressure. If you screw up, there’s an entire year for your fam to be secretly disappointed in you before your next shot. The meal itself is a significant undertaking, of course: the sheer volume of food, the cooking space and timing issues that result from that, and the fact that the Thanksgiving turkey is almost certainly the biggest individual, um, food unit that most people will ever cook. And many of the dishes are somewhat Thanksgiving-specific, so you don’t get  much practice.

If you manage to pull it off despite all that, you get to enjoy the rare, extra-sweet version of gratification that only such involved endeavors can precipitate. There’s the fuzzy warmth of feeding your family, sure, but a lot of it is that feeling of “I am the fucking MAN!” Perhaps my favorite Thanksgiving moment ever was the year that my very Christian uncle gave me a shout-out during grace, mentioning me by name right alongside the big man J.C. himself. So yeah, it’s a selfish pleasure too – I fully own up to that.

But what makes Thanksgiving even more super-special to me is not just that I get to be in charge, but that there is anything to be in charge of at all. My parents  were the first of their respective families to settle here in the United States in the 1970s, so for many years, our family was just us, and my sister and I were the only kids. Most big gatherings or celebrations took place at their  friends’ houses.

At that point, our holiday tradition was no tradition. My mom insists that she started making turkey one Thanksgiving, apparently in response to my being teased in elementary school about how weird I was for not having turkey on previous Thanksgivings. I’m assuming up til that point we’d been eating rice and kimchi and such. I have absolutely no memory of this, which is weird given how obsessed I was with “American” food. If anything, I guess it’s an indication that my mom’s turkey was at least good enough to not turn me against it; many of my friends who were obligated to choke down bland and dry birds in their youths can’t say the same. As one friend summed it up: “Fuck turkey – go sides!” It saddens me to think that turkey in its horribly disfigured cold-cut form is the paradigm for so many.

Middle and high school during the ’80s and ’90s were pretty dark times, with very little in the way of family gatherings or functions occurring at all, as my parents had split up. After I moved out of the house, I totally disconnected with my family for a while, and one especially depressing year participated in one of those potluck things where a bunch of wayward young adults with nowhere to go on Thanksgiving get together to get drunk, and also there’s turkey. Only the hostess of this particular dinner was vegetarian, and instead of turkey, we had fucking Tofurkey. And it was really, really bad. In addition to being the origin story of my deep disdain for said meat substitute, it was also the point at which I began to really feel deprived of this big, awesome, American cultural thing.

It was a few years before I could actually do anything about it, though, other than developing my cooking skills in general. Years earlier, one of my uncles married a woman who already had two children, and they eventually had two kids of their own, and another uncle had another two. They had created a consumer base. And right around the time I was sorta getting my shit together and reconnecting with my family, the kids were getting old enough to voice complaints. They too had grown up eating mostly Korean food, and as a result, your typical American holiday dinner was nothing less than the most exotic of cuisines, something with which I empathized profoundly. Most importantly, they were old enough to help with basic kitchen prep work. And so I, as the spokesperson for the children of the Kim, Hong and Yoon families, declared that Thanksgiving dinner was on, complete with turkey. This was the fiat of the second-generation kids. That was 1997.

At the time I was an OK cook, but even then a research-based obsessive food nerd. That was very helpful, because the usual transfer of knowledge that occurs in traditions that span multiple generations was absent. Our parents just didn’t have any expertise to relate in regards to roasting a turkey or mashing potatoes. More specifically, if our moms did have something to pass along, it would have almost certainly gone to the daughters, not me, since none – not one – of my older male relatives have any cooking skills whatsoever. Yeah it’s cultural, and I’m not saying it’s wrong or right, but it definitely is.

So we started from scratch, and it was book-learnin’ that formed the basis of our early dinners. I would ask the cousins what they wanted to eat, research recipes (which, in the days of dial-up Internet, was a pain in the ass) and show up with all the ingredients Thursday morning. Invariably, the occasional nonfamily guest reacted with shock at seeing the children, and a dude, busting ass in the kitchen while all the grown-ups were watching TV and playing cards. The added bonus for the cousins and me was getting to kick back while the adults did the dishes. A beautiful thing, truly.

In addition to their duties as official peelers, stirrers and choppers, the cousins, through their suggestions and feedback, effectively shaped what is now the tight set of dishes that we call “Thanksgiving dinner.” The turkey has gone through the most variations among the staples, for in my zeal to avoid being responsible for future  turkey-haters, I’ve tried every trick, technique and gimmick I could find. The experimenting has given way to the most  successful combination of treatments in recent years. One year, one of my youngest cousin’s friends called her after her own family dinner to say that she didn’t like eating turkey because it was dry and it sucked. At this, my  cousin expressed total and utter confusion as to how this could possibly be. A proud  moment, indeed.

Now the youngest cousins are reaching college age, and the era of big family dinners has pretty much ceased, victim of yet another divorce, sadly. But former helpers are now in command in their own kitchens, and while I get occasional calls seeking guidance, they can pull off dinner on their own. Information has been successfully transferred. And unlike my friends, when I asked my cousins what their earliest Thanksgiving memories are, they could respond instantly: how fun it was cooking for the family, and that the turkey was awesome.

A version of this story appeared in Baltimore’s City Paper.