16 new Orlando restaurants you need to try in 2016

State of the plate 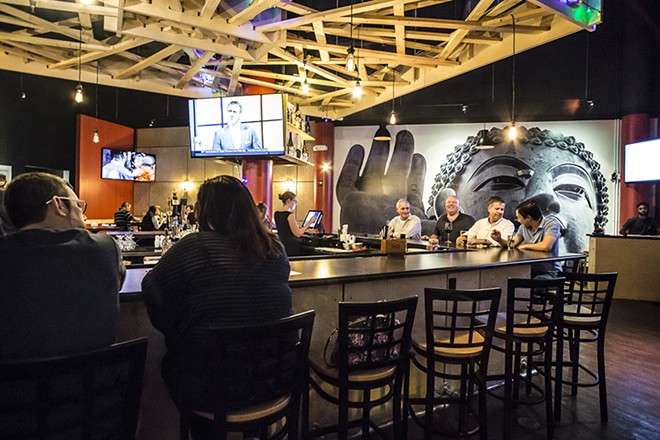 When chef-restaurateur Greg Richie shuttered Cityfish just a year after re-concepting it, we wondered what was up. When he opened Baoery in that space – no offense to Cityfish – we were too busy stuffing our faces with delicious fried-chicken bao and pork-belly ramen to care. Bao, those miniature steamed-bun sandwiches, are the backbone of the menu, but we're partial to the Asian gastropub twists like "kim-cheese" (kimchi-laced mac & cheese) and hoisin duck tacos.

Tabla teetered on the edge for a few years, though it never quite closed; you could say it's not a new restaurant if it's in the same space and bears the same name, but a new menu, new chef and new decor equals a fresh start in our book. Chef Ian Piamonte's addition of Thai, Chinese and Mongolian flavors to Tabla's Indian repertoire has revitalized the room just as much as the remodel unveiled in October: Manchurian cauliflower and Thai green curry mingle with naan, tikka and tandoor specialties in a surprisingly just-right way.

We really wanted to like Bistro Cloclo, but it was just a bit off; service and menu missteps dimmed the appeal of the pretty Parisian room on Restaurant Row. So when we heard chef Reimund Pitz of Orlando mainstay Le Coq au Vin was taking over the space, enfin, our hearts lifted. He and his wife, Sandy, have been dishing up bistro plats du jour — more casual and at a lower price point than Le Coq au Vin's classical cuisine — with Gallic flair for just a few months, but we feel sure they've settled in for a long run.

The newest entry on our list has been open for just a couple of days – their official soft open date was Monday, Jan. 18. It's early days, obviously, but the (mostly) vegan menu encapsulates exactly what we want to eat now: greens-and-grains bowls teeming with fresh veg, leafy herbs, creamy legumes, roasted crucifers and lush sauces. Although it's, say, 98 percent plant-based, we applaud the decision to offer organic milk and farm-fresh eggs to those of us for whom "put a egg on it" is not just a saying, but a way of life. The well-seasoned avocado toast and almond-milk mocha (with cinnamon and salt!) we sampled were spot-on.

It remains to be seen whether Orlando inhibitions are likely to be shed as easily as they are in Key West, but this red-velvet boudoir of confectionery and strong drink is here to encourage naughty behavior, of the highly calorific and ostensibly calorie-burning types. With its none-too-subtle name, high-walled booths and no-children policy, even if all you want is a sugar buzz off dishes like the Money Shot, Jungle Fever or Missionary Crisp, the heavy innuendo may put you in the mood for more. Or not.

Let's get it out of the way: Yes, TR Fire Grill is a concept from Romacorp., parent company of the Tony Roma's rib empire, and yes, it's ripe to be rolled out nationwide. But it's good to remember sometimes that chains aren't inherently evil (depending on your stance on labor relations and supply-chain politics). TR Fire Grill has found itself a strong fan base in its new Winter Park home, occupying 5,600 square feet in the Ravaudage complex after a lengthy "dry run" down by the airport. Kinks seem to have been worked out satisfactorily since its November bow, if the customer raves for its bumped-up, locally-sourced-when-possible pub fare are anything to go by. We're intrigued by an appetizer of thick-sliced bacon and jalapeño deviled eggs topped with pickled red onion and barbecue potato-chip dust; those less hedonistic can take advantage of a diety dish of salmon over spiralized zucchini.