BEST OF ORLANDO 2007 - ARTS AND ENTERTAINMENT 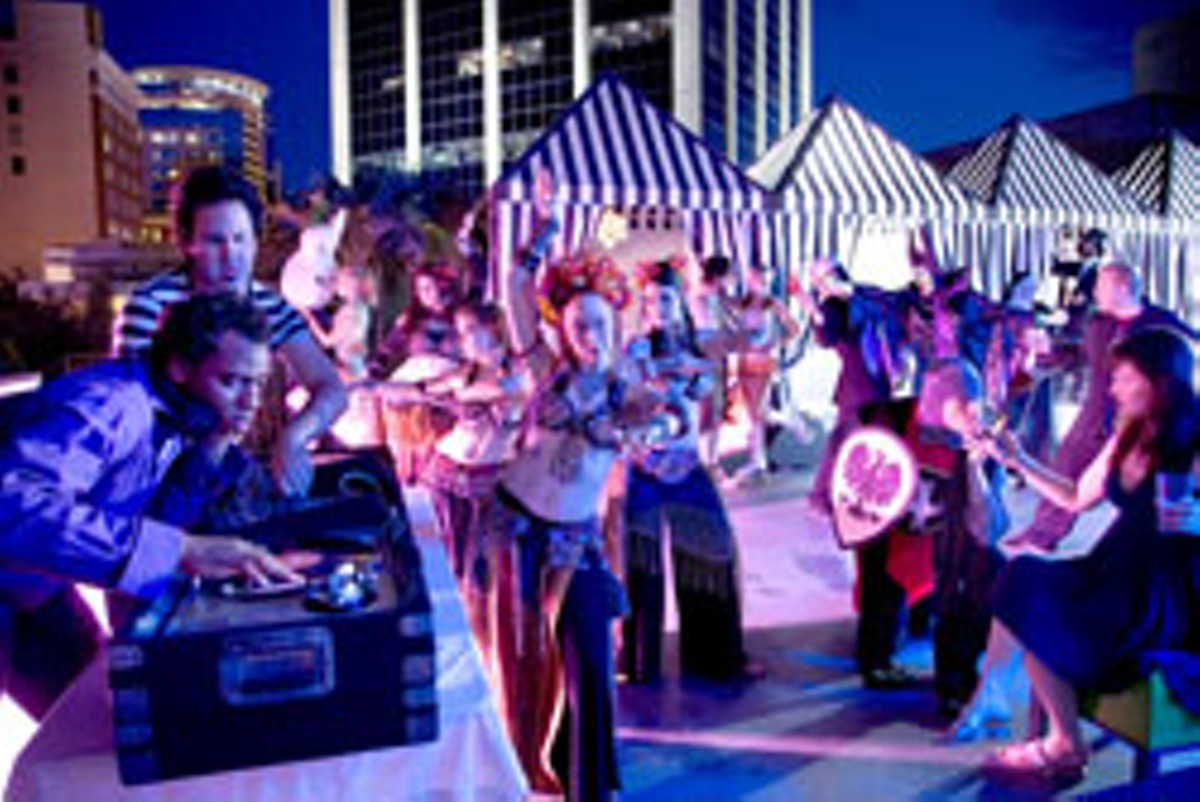 Best ringtone by someone you’ve met

Customizing your cellie’s ring is tempting, but when Lil Mama’s “Lip Gloss” oozes out of your pocket in a work meeting, you’ll be sorry. The search for a cool song that won’t rat out your low-end pop-cultcha habit ends here, with a song only fellow cognoscenti will recognize: Sam Rivers’ “Downstairs Blues Upstairs” is one of the rare songs that sounds good miniaturized to ringtone, an even rarer free-jazz ringtone, and it supports a local.

Best battle of the bands

Ingeniously stupid, this band battle insists your act be formed specifically for the event. After your three-song set, a celebrity panel of the city’s roughest critics is unleashed on your poor ass. With beer-flinging, gratuitous verbal abuse and material destruction, it’s The Gong Show** meets **Mad Max and one of the most riotously original ideas to hit the scene.

Tough as it is to make a living as an actor, it’s even rougher for the undead. Skull Kingdom’s closure and dueling zombie crawls pale next to the royal ramming given last Halloween to Nights of Terror “scareactors,” who haunted the Mercado for weeks on promises of paychecks that never arrived. As always, ghouls get no respect.

Best recycling by a theme park

Best news for the theater community

It looked like Theatre Downtown’s bacon-hating landlords would bring down the final curtain on the Princeton Street landmark by the end of the year. But their lease was recently renewed through 2008, and Florida Hospital sounds amenable to including performance space in the mixed-use development slated for Orange Avenue. Here’s hoping the Hilgenbergs’ theatrical family has a home for years to come.

OK, we’re partial to the naked statues on the front lawn, visible right when you drive up. But that’s not to shortchange this collection of marble and bronze statues, many by the late sculptor Albin Polasek himself. The museum is closed during July and August, but the gardens are open 10 a.m.-4 p.m. Monday through Friday all summer.

Best actress to watch, on stage and off

Born Margaret Mary O’Keef, this homegirl attended Rollins College, where she now teaches. An outstanding and prolific actress, her presence lights up any production (and her bio on IMDb.com chronicles her film appearances). Her roles are countless, but we must laud her absurd, boob-bustin’ sting last fall as Mère Ubu in Ubu Roi directed by John DiDonna of the Empty Spaces Theatre Company.

Not content with going from new kid on the block to the city’s coolest indie-rock label in only a couple of years, this crew views what others consider unconnected or even competitive forces as opportunities for mutually reinforcing collaboration (look at the recent Stone Soup Festival). The result is an excited, communal vibe not felt in local music in years. This is the kind of creative energy that makes a city hip.

This year, the historic club has gone from a faded symbol of yesteryear’s house music grandeur to becoming, once again, a forward-thinking night-life innovator. Dusted off by a hipper and hungrier staff, it’s slurped up the lion’s share of the indie dance spoils and – through strategic partnerships with strong promoters – become a viable midsized live venue, something downtown hasn’t had consistently in nearly a decade.

Best addition to the scene

Fuck all those people who just sit there bemoaning the fact that we aren’t Seattle or Austin; they’re just followers in hipster’s clothing. Because they’re active, the real scene people already know we got our own thing goin’ on. Why else would the revered frontman of America’s coolest country-rock band (Lucero) move here even though his band remains in Memphis?

As DMAC dwindled and the city hyped the CityArts Factory as the anecdote to downtown’s uncreative ills, we were skeptical. But dammit to hell, CityArts Factory got on its feet and people are actually coming to its mix of art shows in gallery spaces and performances on the atmospheric second-floor stage. We never get a clear picture of what’s coming and who’s behind it, but the increasing activity is obvious.

His original company is Alien Surf Productions, though most of Dave Segal’s work is now invested in Bootleg Television, a one-time TV show gone Internet. Since 1993, when Segal moved here for Valencia Community College’s film program, the die-hard has captured a couple thousand hours of local music coverage. It’s time to let loose of some of that history, and Segal’s working on a show at CityArts Factory.

Perhaps by this time next year, Killgallon’s orthodontist will force us to come up with another superlative to bestow upon the 16-year-old shredder, and we’ll be glad to oblige. For now, though, watching him finger-pick his power trio’s way into our hearts while trying to lasciviously flick his tongue through those bits of shiny metal is one of our favorite things to do.

Yeah, yeah, yeah. The food’s great. We know. Nibbling on their coconut mussels or their chicken saltimbocca is a great way to kill the first part of the evening. But College Park gets a little, uh, quiet after dinner, don’t it? Not anymore. Thanks to the teaming up of Taste with Will Walker (whose Will’s Pub relocation is “temporarily delayed”), a very nice stage has been set up in the back dining room, allowing local bands a cozy room to play after the kitchen closes at 10 p.m. Walker continues to prove his dedication to this town’s underground rock scene by booking its more interesting (and sometimes abrasive) acts, all while still managing to stay true to his “screw downtown!” ethos.

Christina Wagner’s combination of soft-spoken humility, infinite friendliness and unabashed, vocal disdain for assholes is what makes her an intriguing personality. What’s more notable is that, as an acoustic musician, she produces completely unique and genuinely heartfelt music in a milieu usually reserved for the predictable. Though she lives in Jacksonville, she plays here enough that we pretend she’s ours.

There’s so much data flowing through Corinne Gammichia’s head that it’s a wonder the attractive brunette’s hair doesn’t stand on end. Socializing and networking are what the fun and funky owner of Alchemy does, both in and out of her salon. In addition to her hair skills, which satisfy creative types drawn to the cool-but-not-pretentious studio, she’s always sparking artistic life in the community via her fiery passion.

Best incubation of art into another dimension

“Digital media” is a cold phrase that heats up in the hands of Jeff Wirth, executive director of the Interactive Performance Lab. His work is groundbreaking; its applications are set to transform the concepts of entertainment, education and commerce. The third annual Simu-Life project (in which a person is dropped into a scripted drama that takes place in real time) transpired in June. Read more at IPL’s website and open the door to the future.

Best job of getting it together

The annual Fringe festival has made countless changes over the years in order to present its 10 days of theater in an efficient manner – which, if overdone, is antithetic to the chaotic core of Fringe. This year’s sprawl found the right proportion of organization and creativity. The food/beer tents out front in Loch Haven Park welcomed visitors; the schedules, high attendance, ticketing, talent and flow made it the best to date. Congratulations to Beth Marshall and crew.

Put artist Doug Rhodehamel anywhere and he’ll make art. Take, for example, his signature mushrooms, fashioned from brown paper bags, which he started making in high school but are now a nationally growing movement called the SPORE Project. His double coup de grâce in May was a fund-raising auction of decorated mushrooms he solicited from local “celebrities” and the planting of 10,000 ’shrooms across Loch Haven Park, with signs that asked people to pick ’em up and enjoy.

The most encouraging words on the Kerouac House website: “We are NOT looking for Kerouac imitators.” The Beats have had more than their share of ink, but the cottage in College Park where Jack Kerouac wrote Dharma Bums isn’t stuck in that overplayed era. The nonprofit that owns the house offers four “up-and-coming” writers per year free room and board for a three-month writing sabbatical. Each writer-in-residence gives at least one reading; Fay Hart, the Spring 2007 writer (ex-wife of Steve Nieve, pal of Exene Cervenka), offered the room a bouquet of punk-rock odes chronicling her drinkin’ life. Keep an eye on the website for future events, workshops and parties.

Line for the women’s bathroom? No worries, just use the men’s. Or vice versa. That’s what makes Southern Nights the bomb; it doesn’t matter which restroom you enter, you’ll almost always be surprised – if not by who’s in there, then by what’s going on in the stall next to you.

A Cook Trio gig is the easiest way to go back in time: pre-World War II, smoky Paris café, a pastis in front of you and the Quintette du Hot Club burning up the stage. The Cook Trio’s gypsy jazz raises Django from the dead (although they still have all of their fingers), but they’re just as likely to resurrect John Coltrane, Cole Porter or Thelonious Monk.