Zombies are taking over I-Drive, and it'll cost you to stop them 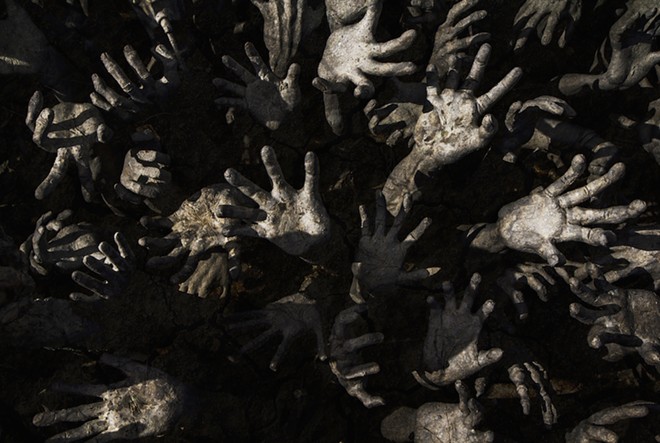 Photo via NYZ Orlando
Zombies have seen massive success in pop culture over the past few years, and now Orlando has been invaded by these brain eaters. Down on International Drive, at least three major zombie attractions have either opened their doors or are currently in the process of opening.

The first one to open is the new Zombie Outbreak attraction next door to Titanic (sadly, there is no cross-over between the two attractions; no Titanic zombies here). Using a space that was formerly a restaurant, Zombie Outbreak uses realistic-looking metal laser guns in a single highly themed maze. The maze, similar to ones you'd find at Halloween Horror Nights or Howl-O-Scream, uses live actors, audio-animatronics and video screens in an assault on the senses. Guests pay around $25 (with various discounts offered) to experience the zombie apocalypse.

The zombies have headbands that freeze them for eight or so seconds. This allows guests enough time to escape from the zombie. Each time a guest shoots a zombie headband it’s counted as a “kill.” The goal for the zombies is to get within 3 feet of the guests, which is counted as a “bite.” At the end of the experience, which takes roughly 15 mins or so from start to finish, guests can compare their “Bite to Kill” scores against others in their group.

Busch Gardens offered a very similar experience at Howl-O-Scream in recent years. There, zombies wore vests that froze them instead of headbands. Also, that one didn’t offer the detailed scoring that the new stand-alone attractions offer.

On the north end of I-Drive at Artegon, another zombie laser tag attraction is under construction, NYZ Orlando. Similar to Zombie Outbreak, NYZ will offer realistic weapons in an indoor maze filled with zombies. NYZ will also feature two mazes, one more intense than the other, along with a lounge and a small retail area.

Just south of Zombie Outbreak, another zombie laser tag attraction is under construction. Unlike the other two, Zombie Island (the working name of this yet-to-be-fully-realized attraction) will be mostly outdoors. It takes over a failed mini-golf attraction with giant dinosaur statues on a volcano looking faux-island. Tiki bars, caves and waterfalls will join the dinosaurs and zombies at this attraction.

For those more serious about their zombie preparedness, after practicing their zombie shooting skills they can swing by the Zombie Survival Orlando. This military surplus store on Sand Lake Road is specifically designed to offer all the necessary items to survive an actual zombie outbreak.