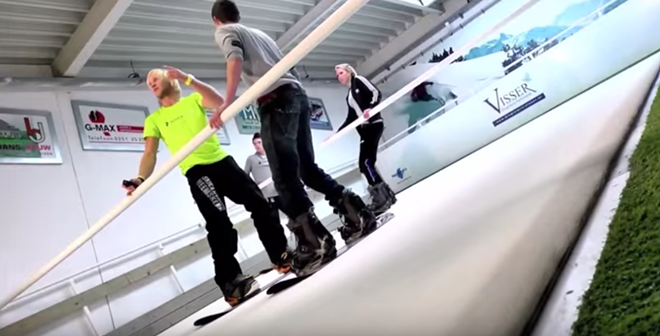 Photo via YouTube
While the outdoor simulated snow ski and extreme sports project in Kissimmee has been put on hold due to a failed land deal, there is another local option to help scratch that snow skiing itch. WinterClub Indoor Ski & Snowboard is a new east Winter Park-based indoor simulated ski center located on Aloma Ave. in an old office building. It will offer a mix of different ski simulators including treadmill style ‘endless’ slops, video ski simulators and an ice rink.

The new center is less of a tourist attraction and more of a serious training center for ski enthusiast of all skill levels, with classes offered for young kids through adults.

The unique equipment used at the facility will be some of the most state of the art ski equipment in the region. The slopes are made of soft nylon that allow for both snowboarders and skiers to use them. With ice and other cold features the chilly facility will also feature a coffee bar. A retail area is also expected to be featured.

There have been numerous other proposals for snow ski focused sports in the Central Florida market including one next what is now Artegon and one what is now Legoland Florida. Out of all of the local ski proposals this one is the furthest along by a long stretch.

Few others have ever gotten off of the drawing boards but WinterClub Indoor Ski & Snowboard is readying to open within the next few weeks. While the building looks nearly identical to when the former medical offices were there, the inside has been completely gutted to open the space for the massive new simulators.

Are small treadmill style ski simulators enough to keep you interested in snow skiing year round? Is this a decent replacement for the larger and much more extensive ski slopes proposed for around the region?