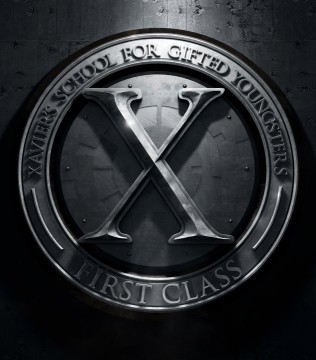 As we move slowly out of the January Junk phase of movie going, we're finally starting to get a good look at what action extravaganzas will be available for our senses to feast on in theaters this summer.

Last weekend saw trailers for Transformers 3, Thor and Captain America debut, and tomorrow (Friday, 2/10) we'll get a glimpse at the trailer for X-Men: First Class on the movie's Facebook page, where there will be an app -- appropriately titled the X-App -- to download that will mete out more promotional stuff as we get closer to the release date.

Matthew Vaughn directs James McAvoy, Michael Fassbender, Rose Byrne, January Jones, Oliver Platt, and Kevin Bacon in the latest of the X-Men franchise, due out in theaters on June 3rd.

X-MEN: FIRST CLASS charts the epic beginning of the X-Men saga, and reveals a secret history of famous global events. Before mutants had revealed themselves to the world, and before Charles Xavier and Erik Lehnsherr took the names Professor X and Magneto, they were two young men discovering their powers for the first time. Not archenemies, they were instead at first the closest of friends, working together with other Mutants (some familiar, some new), to prevent nuclear Armageddon. In the process, a grave rift between them opened, which began the eternal war between Magneto’s Brotherhood and Professor X’s X-Men.

There is sure a lot for Fox to make up for, after the disastrous dual failure of X-Men 3 and Wolverine. If there is one thing X-Men: First Class may have going for it before a frame has been seen, its that, really, it can't be any worse than the torturously awful second half of X3.

I thought Kevin Costner stopped the Cuban Missle Crisis though? Silly me.