Where to find better boos for your buck

Willing to put a few miles on the car? Try Howl-O-Scream in Tampa or A Shallow Grave in Winter Haven 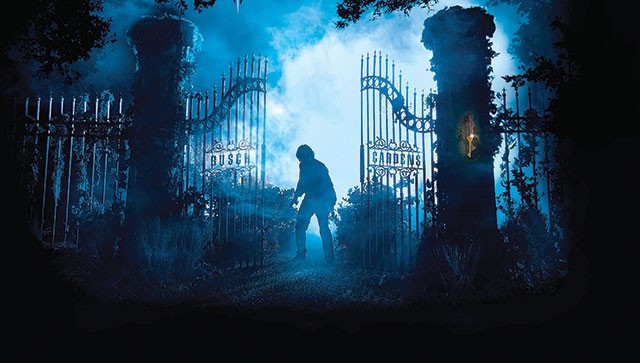 Universal’s Halloween Horror Nights deservedly draws much of the attention paid to Central Florida’s haunt industry, but they’re far from the final word on fear. In fact, fright fans willing to put a few miles on their car can find better boos for their buck an hour or so outside Orlando. Last Thursday, I took a road trip to visit Busch Gardens Tampa’s Howl-o-Scream – Universal’s closest competitor among major theme park Halloween events – and Winter Haven’s Shallow Grave, which was my runaway pick for the best new haunt of 2013. I’m happy to report that I returned not only unscathed, but invigorated by the reminder that imaginative underdogs with vision can not only go toe-to-toe with the big-budget, big-name big boys, but sometimes even score a knockout.

Busch Gardens Tampa’s Howl-o-Scream event has long reminded me of a throwback to the first decade of Universal’s Halloween party. Both products present multiple haunted mazes (eight at each park this year, including Busch’s extra-cost interactive “The Experiment”) along with a saucy satire show (Fiends is Busch’s “naughty nurses” answer to HHN’s Bill and Ted), outdoor scarezones and amusement rides.

But where HHN has become dominated by licensed intellectual properties tied to movies and TV shows, HOS features original (if not especially inventive) themes for all of their mazes. And while Universal’s scarezones are a shadow of what they once were, Busch seems to have more actors roaming outside their haunted houses than inside them, literally planting pseudo-psychos along the sprawling park’s pitch-black pathways. Keep an ear out for the “slash mobs” of rollerbladers sliding into the unsuspecting and the roving snack vendor with a comically chilling treat trapped in his pushcart.

The biggest way HOS still resembles old-school HHN is in the relative absence of attendees. While Thursday-night haunt queues at Universal easily range from 60 to 90 minutes, the longest wait I saw at Busch was 40 minutes for the new Falcon’s Fury drop tower. Though I didn’t arrive at HOS until 9 p.m., the longest I waited for a maze was 25 minutes, and many attractions were a walk-on, making front-of-line passes completely unnecessary. While I was hard-pressed to fully explore HHN’s offerings before the witching hour, I saw everything I wanted to at HOS within two hours.

On the downside, only two of Busch’s haunts were built fresh for this year (with the other six seeing only minor upgrades from 2013), and the newcomers were both underwhelming. Dead Fall’s haunted Victorian greenhouse (complete with ceaselessly singing ghost girls and one good Pepper’s Ghost gag) begins beautifully, but the bulk becomes boring fences and faux foliage bought from Home Depot. Zombie Containment Unit 15 takes a brilliant concept – laser tag guns let guests “stun” the undead – and badly butchers its execution with bargain-basement sets and apathetic actors that barely reacted to being blasted.

Given its comparatively calm crowds, I’d probably be more bullish on Busch’s value proposition for Orlando-area haunt fans if I hadn’t visited the Shallow Grave immediately beforehand. But this independent attraction, housed inside an unassuming Winter Haven warehouse, once again blew me away, providing proof positive that passionate amateurs – like husband-and-wife producers Joe and Heather Phillips, working with set designers Eric Dodson and Chad Ashley, and makeup artists Mick Velasquez and J.D. Ellis – can beat the deep-pocketed professionals at their own game.

Last year, I raved about Shallow Grave’s debut maze, featuring the home of cannibalistic undertaker Thaddeus and his murderous family. That original experience is back and even better – featuring numerous enhanced effects, like an excruciatingly unnerving new “cage” scene – and has also been joined by a wildly creative second maze depicting the PTSD nightmares of Thaddeus’ escaped victims. Whereas the first haunt re-creates the sights (and sickening smells) of a snuff film with grimy, raw realism, the new house’s surreal scenarios involve mutant spiders, vibrating voodoo shacks, Nazi zombies and killer carnies, providing welcome color and contrast.

Even though Shallow Grave combo tickets cost only $25, each maze is easily more than twice the length of HHN’s standard haunt, and their animatronic effects and gruesome gore are as good or better than anything in the theme parks. Most importantly, Shallow Grave’s amazingly aggressive all-volunteer cast will stalk, taunt and even touch you to trigger true terror; not only did they repeatedly make me jump (a rarity in any haunt), at one point I “accidentally” ran out an emergency exit. You simply can’t call yourself a Floridian Halloween fan unless you make the drive to Winter Haven this season. Just tell Thaddeus I sent you.