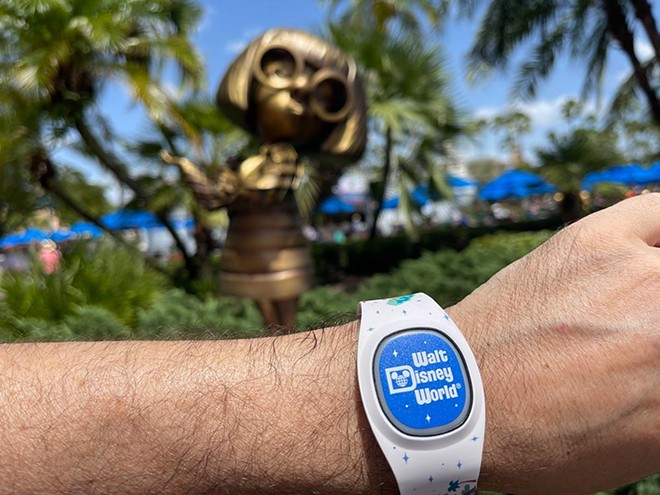 Between the record-setting second-quarter revenues recently reported by Central Florida area attractions and the rapidly rising levels of traffic at Orlando International Airport, it seems like our local tourism industry has rebounded at full speed from the pandemic this summer — but one major thing has been missing. While the crowds may be back in full force, with an ever-increasing roster of resurrected live performances to keep them entertained, this summer there's been a noticeable deficit of major new ride debuts. For example, SeaWorld opened its Ice Breaker roller coaster back in February, and has begun teasing a stand-up Surf Coaster for 2023, but its only new draws for the summer were fireworks and food festivals. Likewise, after opening a blockbuster new attraction nearly every summer for the past decade, Universal not only passed on adding anything substantial to its existing parks this season, but, as of this writing, has also been unable to reopen Revenge of the Mummy following its multi-month refurbishment.

Memorial Day's long-delayed opening of Epcot's Guardians of the Galaxy: Cosmic Rewind coaster was the exception that proved the rule, as Walt Disney World's three other theme parks received no substantive additions for this summer's resurgent audiences. But in lieu of adding new actual adventures included with regular admission, late last month Disney introduced a new optional accessory that — depending on your level of cynicism — is either an exciting evolution in interactive technology, or a desperately underdeveloped cash grab. Welcome to the high-tech fantasy and hair-pulling frustration known as MagicBand+.

"MagicBand" will already be a familiar buzzword to anyone who has vacationed at Disney World over the past decade, and many annual passholders like myself probably already own a half-dozen or more of the low-powered RFID-enabled wristbands, which were a cornerstone of Disney's controversial billion-dollar MyMagic+ information technology project. For years, MagicBands were provided free to onsite hotel guests and passholders, allowing them to tap their way through turnstiles instead of scanning traditional tickets. However, promised MagicBand-triggered effects inside the parks either never materialized or faded away, as Disney focused on smartphone-based interactivity instead.

Rather than abandon the bands entirely, Disney has doubled down and released MagicBand+, which squeezes in additional technology — including a ring of multi-colored lights, haptic vibration motors and Bluetooth wireless communication — to bridge the gap for guests between the free PlayDisney app's digital games and the physical theme park around them. In addition to performing all the same functions as the original MagicBand (which will also remain available and fully operational for the foreseeable future), MagicBand+ lets wearers enjoy exclusive app-based activities around the Walt Disney World Resort, including the Fab 50 Quest in all four parks; the Star Wars: Batuu Bounty Hunt around Galaxy's Edge at Disney's Hollywood Studios; and synchronized effects during nighttime spectaculars. (Raise your hand if you remember the ill-fated "Glow With the Show" and "Made With Magic" light-up merchandise.)

Alas, my opening-day MagicBand+ experience was less than magical. Although I was able to purchase my preferred design on the morning of their debut without a long delay, it emerged from the box with a dead battery.

A much smarter move is to order yours online ahead of time via shopdisney.com. That way, you can charge the band, connect it to your park admission using your My Disney Experience app (remove your phone's case if tapping doesn't trigger the process), and update its firmware and settings (be sure to pick your favorite color and turn on increased motion sensitivity in the options) before arriving at the resort, instead wasting time in the park trying to get it working like I did.

Once my MagicBand+ was fully powered and paired, it didn't take too long for me to exhaust the interactive entertainments that the devices currently enable. The Fab 50 Quest is pretty much a failure, at least in the two parks I've tried it at so far. The interactive golden character statues involved in the game are all clustered together in a central location at Epcot and Hollywood Studios, killing the scavenger hunt's challenge; waving your MagicBand+ at them makes you look ridiculous, and only triggers a reaction about half the time; and the payoff — a brief sound clip that's often too quiet to understand and some stiffly animated augmented reality (AR) characters viewable inside the app — barely seems worth the effort.

Batuu Bounty Hunting fared far better, but still wasn't without its flaws. After receiving an assignment, I roamed Black Spire Outpost seeking my mark like the Mandalorian. My MagicBand+ buzzed and blinked as I tracked my alien prey, who was ultimately revealed (again via AR) behind a sealed door emblazoned with a yellow skull symbol. This digital game of hot-and-cold makes a fun distraction while waiting for your Rise of the Resistance Lightning Lane time, but the clues can be confusing — especially when it's too sunny to see the MagicBand+'s colored lights, which is almost always — and after a few rounds, my band's low-battery warning began blinking.

Ultimately, there's no reason that all these features couldn't have been integrated into Disney's apps for smartphones or Apple Watch. No reason, that is, except the opportunity to sell digital handcuffs to Disney diehards like myself for $35-$45 apiece. Without question, Walt Disney World has plenty of obsessed passholders who will appreciate MagicBand+ as one more diversion during their near-daily visits.

The real test will come late this year when MagicBand+ debuts at Disneyland in California, which has decimated its Magic Key passes for locals in favor of prioritizing short-term tourists. Those folks may be better served spending that MagicBand+ money on a couple of days' worth of Genie+ Lightning Lane privileges, or one of the interactive Power-Up bands that will be sold at Super Nintendo World, which should open shortly after at rival Universal Studios Hollywood.

A wristband-based battle between Mickey and Mario? Now that's a Super Smash Brothers bout I can't wait to watch.