Everything about the fundamental mechanics of baseball seems simple. Kids stuff. That's when we come to it, as little kids hitting off a tee, or having a ball tossed softly to us in the park. There’s nothing to it. You rear back to throw. You kick as hard as you can to run. Extend your arms to swing. But as most of us know by now, as we sit at desk jobs or customer service counters, it ain't simple at all.

In baseball, the thing that seems the most simple to perfect is the knucklball. You don't even throw it, you dig your fingernails into ball and push it to the plate. It doesn't matter if you can't throw fast (in fact it helps not to), or if you're not as athletic. The ball does all the work, not the pitcher. The knuckleball is, of course, the hardest pitch the perfect. In fact, there have been fewer than 100 full time major league hurlers who have thrown it down the years.

In 2011, when this documentary was filmed, there were two knuckleballers:Boston's veteran righty, Tim Wakefield (44), and the Mets' reclamation project, R.A. Dickey (36). Dickey’s age would seem worrying if he was any other type of pitcher, but unlike hard throwers, it gets better as your arm loses its velocity. Most can pitch into their 40s, like both Neikro brothers, Joe and Phil, who could still pitch when they retired, they just couldn’t field their positions anymore.

In factWakefieldand Dickey, both former-first round picks, were reclamation projects as knuckleballers.Wakefieldcame up withPittsburghin '92 as a power hitting corner infielder after a big college career, but seemed lost at the plate with the switch from the aluminum bats in college to the wood bats of the bigs. It was chance that a minor league instructor saw him fooling around with the knuckler and he got to save his career, eventually playing 18 seasons. Dickey, after a great college career capped off with a bronze medal at the 1996 Olympics, could never put it together in the majors with his normal arsenal of pitches. He bummed around the minors until he gave the knuckleball a try to make one last grab at saving his career in the Mets minor league system. 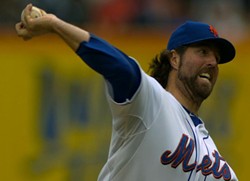 They might be underdogs, but watching the film you don’t ever get that sense from them. They are calm and professional, taking delight in how silly they can make the likes of Albert Pujols and Derek Jeter look with their simple 60 mile an hour pitch that dances its way to the plate. They say, in fact, they prefer to face the big swingers (who are used to quality breaking pitches and pure heat). It’s the scrappy guys who are used to hitting junk in the minors who put the most hurt on them.

Most pitches in the majors are about the tightest, quickest spin you can get on them. The tighter, the faster you throw it, the bigger the break, the wider the cut, the later the movement. It all adds up to a ball that is harder to hit. With the knuckleball all of that goes out the window. The key to the pitch is that it doesn’t spin, or it little spins as little possible – less than two revolution between leaving the pitcher's hand and reaching the catcher's glove (or at least the catcher's general vicinity). With this lack of spin, the resting stitches catch the air different every time, making the pitch completely unpredictable not only to the hitter, but the catcher, umpire and even the pitcher himself.

But even for those who have mastered the pitch, it's hard to control. A microcosm of baseball itself, the knuckleball is a cruel, unpredictable thing and, like Bill Bucknor or Mitch Williams before him, Tim Wakefield's career highlight will probably end up being one bad pitch. He's 200 game winner, yes, but he's also the guy who gave up the walkoff homerun to Aaron Boone -- Mr. Scrappy -- in the 2003 AL Championship Series, sending the Yankees to the World Series instead of the Red Sox. Before that one pitch, a knuckler that tumbled its way to the plate more than danced, he was probably going to be the MVP of the series. He was dynamite against the Yankees that series. Hundreds of great pitches all forgotten because of one bad one.

Wakefield retired at the end of the 2011 season. This season, there was only Dickey to carry the banner. Carry it he did though, to the point that he'll probably win the National League Cy Young Award after a 20-6 All-Star season where he threw back-to-back 1 hit shutouts. All of that means one thing: we’ll see a lot more of these oddballs in the future as kids now begin to take it as a serious pitch.

Check out the trailer on Apple.

Dickey shows ESPN how to throw the pitch.

You can catch it on any number of streaming sites online, or onDemand.