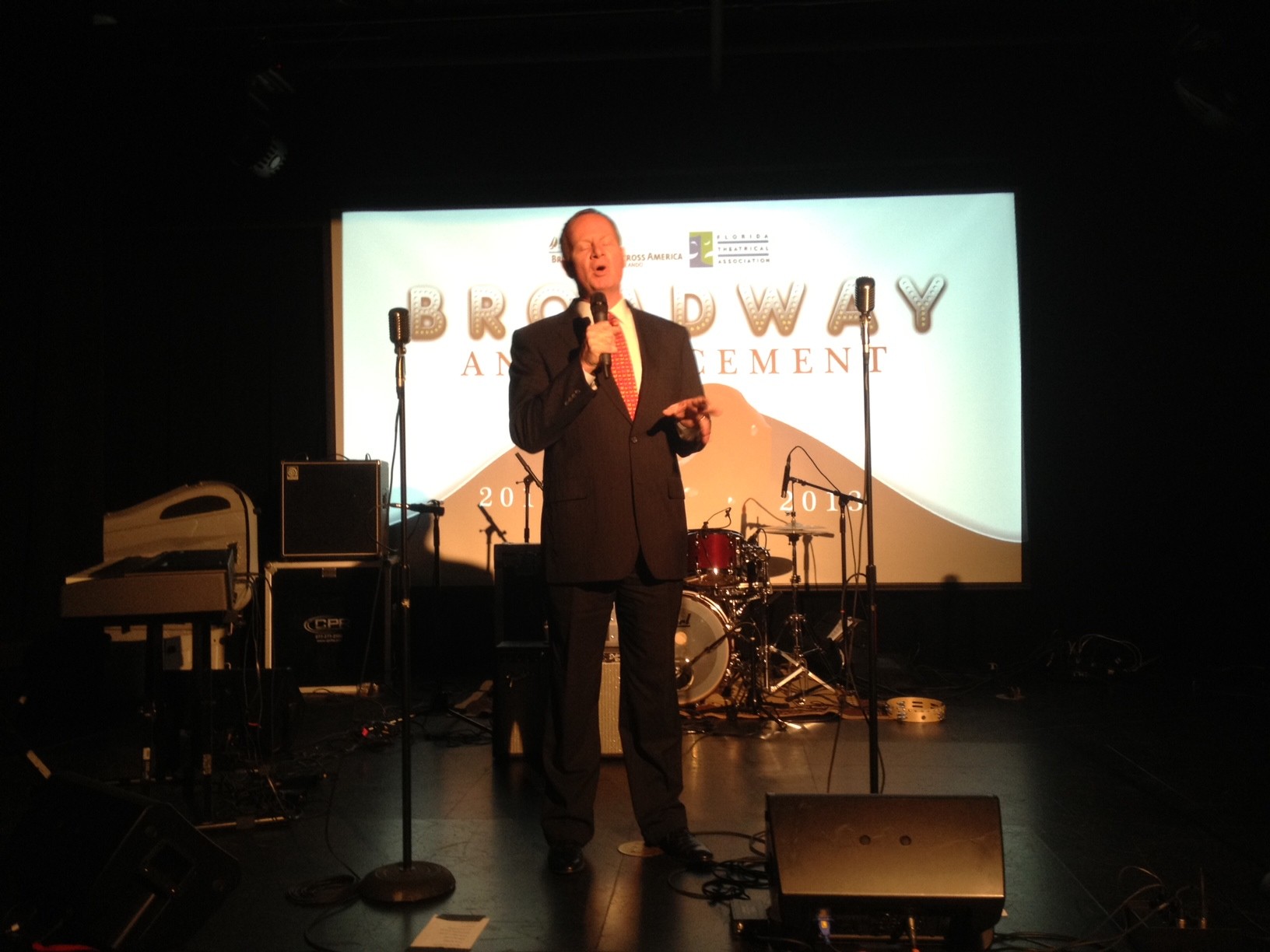 Tonight, the hit musical Billy Elliot opens at the Bob Carr as one of the centerpieces of the current 2011/2012 Fairwinds Broadway Across America season. There are still several shows left before the season ends, but that doesn't mean it's too soon to start looking for ward to 2012/2013.

At downtown's Abbey Theater last night, Florida Theatrical Association's Ron Legler was joined onstage by Orlando Mayor Buddy Dyer to introduce the six shows that will tour through here beginning in October 2012. The scheduled shows, all musicals and all but one still currently on Broadway, are as follows:

ORLANDO, Fla. – The 2012 – 2013 FAIRWINDS Broadway Across America – Orlando season is bringing the best of Broadway straight to Orlando! The sensational 2012-2013 season boasts some of the hottest shows direct from Broadway, including one of the most beautiful love stories ever told, Disney’s BEAUTY & THE BEAST; the 2010 Tony winner for Best Musical, MEMPHIS; and the acclaimed musical comedy based on the wildly popular film, SISTER ACT. The season also features the smash hit musical MILLION DOLLAR QUARTET;  the irresistible story of one of the most popular Disney films of all time, MARY POPPINS; and Bette Midler’s outrageously fun PRISCILLA QUEEN OF THE DESERT. Season tickets are on sale now and can be purchased at www.OrlandoBroadway.com, by calling 1.800.448.6322 (M – F, 10a.m. – 5p.m.) or in person at 100 S. Eola Drive, Suite 100, Orlando, Fla. 32801 (M – F, 10a.m. – 5p.m.).

Prices for the six-show season range from $170 - $600, depending on performance time, day of week and seating location selected.  There are a variety of reasons to join the family of FAIRWINDS Broadway Across America – Orlando season tickets holders, including:

·         Priority and additional ticket purchase offers prior to public onsale

Tickets to individual shows in the 2012 – 2013 Season are not available for purchase at this time. All shows will be performed at the Bob Carr Performing Arts Centre.  Current season ticket holders should expect their renewal packets to arrive via USPS no later than March 1.

Disney’s BEAUTY AND THE BEAST, the amazing Broadway musical, based on the Academy Award-winning animated feature film, has won the hearts of more than 35 million people worldwide. This classic musical love story is filled with unforgettable characters, lavish sets and costumes, and dazzling production numbers including “Be Our Guest” and the beloved title song. Experience the romance and enchantment of Disney’s BEAUTY AND THE BEAST, October 2 – 7, 2012.

MILLION DOLLAR QUARTET is the smash hit Broadway musical, inspired by the electrifying true story of the famed recording session that brought together rock ‘n’ roll icons Elvis Presley, Johnny Cash, Jerry Lee Lewis and Carl Perkins for the first and only time. On December 4, 1956, these four young musicians were gathered together by Sam Phillips, the “Father of Rock ’n’ Roll” at Sun Records in Memphis for what would be one of the greatest jam sessions of all time. MILLION DOLLAR QUARTET brings that legendary night to life with an irresistible tale of broken promises, secrets, betrayal and celebrations featuring timeless hits including “Blue Suede Shoes,” “Fever,” “That’s All Right,” “Sixteen Tons,” “Great Balls of Fire,” “I Walk the Line,” “Whole Lotta Shakin’ Goin’ On,” “Who Do You Love?,” “Matchbox,” “Folsom Prison Blues,” “Hound Dog” and more. Don’t miss your chance to be a fly on the wall of fame when MILLION DOLLAR QUARTET brings the legends to Orlando October 30 – November 4, 2012.

SISTER ACT is Broadway’s acclaimed musical comedy based on the wildly popular film of the same name. When disco diva Deloris Van Cartier witnesses a crime, the cops hide her in the last place anyone would think to look – a convent! Under the suspicious watch of Mother Superior, Deloris helps her fellow sisters find their voices as she unexpectedly rediscovers her own. A sparkling tribute to the universal power of friendship, SISTER ACT will give Orlando audiences a reason to rejoice December 4 – 9, 2012.

Featuring an irresistible story and unforgettable songs from one of the most popular Disney films of all time, plus brand-new breathtaking dance numbers and spectacular stage-craft, MARY POPPINS is everything you could ever want in a hit Broadway show! MARY POPPINS is bringing its own brand of Broadway magic to theaters across the country, which has Variety raving, “This is the rare touring production that over-delivers on every level!!” Get swept up in the fun of this high-flying musical January 8 – 13, 2013!

BETTE MIDLER proudly presents the most outrageously fun Broadway musical: PRISCILLA QUEEN OF THE DESERT! This spectacular show tells the uplifting story of a trio of friends who hop aboard a battered old bus searching for love and friendship in the middle of the Australian outback and end up finding more than they could ever have dreamed. An international hit with more than 500 dazzling, 2011 Tony® Award-winning costumes, PRISCILLA features a hit parade of dance-floor favorites including "It's Raining Men," "Finally," and "I Will Survive."  The Hollywood Reporter calls PRISCILLA "funny and fabulous!  Joyous entertainment with eye-popping visuals and unexpected heart!" Hop aboard the road trip of a lifetime when PRISCILLA QUEEN OF THE DESERT dances its way into Orlando April 16 – 21, 2013.

TURN UP THAT DIAL... From the underground dance clubs of 1950s Memphis, Tennessee, comes a hot new Broadway musical that bursts off the stage with explosive dancing, irresistible songs and a thrilling tale of fame and forbidden love. Inspired by actual events, MEMPHIS is about a white radio DJ who wants to change the world and a black club singer who is ready for her big break. Come along on their incredible journey to the ends of the airwaves -- filled with laughter, soaring emotion and roof-raising rock 'n' roll.  MEMPHIS features a Tony®-winning book by Joe DiPietro (I Love You, You're Perfect, Now Change) and a Tony®-winning original score with music by Bon Jovi founding member David Bryan.  Directing is Tony® nominee Christopher Ashley (Xanadu), and choreography is by Sergio Trujillo (Jersey Boys).  Get ready to experience Broadway’s most exciting new destination – what AP calls “The very essence of what a Broadway musical should be.” Winner of four 2010 Tony Awards® including Best Musical, MEMPHIS will rock the Orlando airwaves May 14 – 19, 2013.

The 2012 – 2013 FAIRWINDS Broadway Across America - Orlando Season is as follows:

For more information on the 2012 – 2013 Season, or to order online, log onto www.OrlandoBroadway.com.

FAIRWINDS Broadway Across America - Orlando is presented by Florida Theatrical Association, a non-profit civic organization with a volunteer board of trustees established to ensure the continued presentation of quality touring Broadway productions and the promotion of arts education throughout the state of Florida.  FAIRWINDS Broadway Across America - Orlando is given promotional support by WKMG Local 6. For more information, visit www.FloridaTheatrical.org .